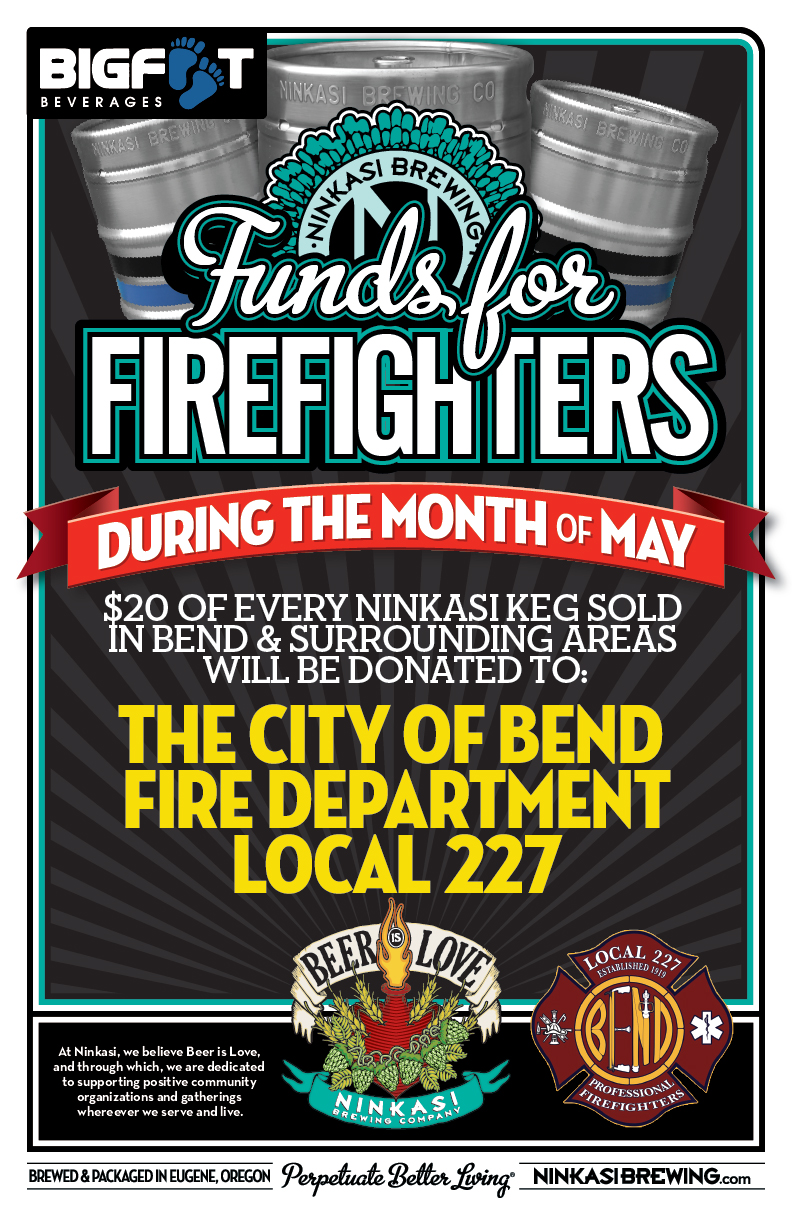 During the Month of May, $20 of Every Ninkasi Keg Sold in Bend and Surrounding Areas will be Donated to Bend Fire Community Assistance Program

EUGENE, Ore.—April 25, 2018—Ninkasi Brewing Company has teamed up with wholesale partner, Bigfoot Beverages to offer a month-long give-back program in support of City of Bend Fire Department (IAFF Local 227), called Funds for Firefighters. For every Ninkasi keg sold in Bend, Ore. and surrounding areas during the month of May, $20 will be donated to support the Bend Fire Community Assistance Program—providing immediate assistance and relief to those experiencing crisis.

“We are thrilled to work with our distribution partner, Bigfoot Beverages, to bring back Funds for Firefighters for a second year,” says Billy Nick, Bend-area market manager for Ninkasi. “I look forward to seeing just how much we can raise to support the Bend community.”

Established by the City of Bend Fire Department, the Community Assistance Program offers crisis assistance in two ways: in the field, and through community involvement and partnerships. The program funds can be accessed anytime by Bend Fire personnel to provide immediate assistance to those experiencing a crisis including aiding families and individuals with food, temporary lodging, warm clothing, school supplies, and much more.

“As first responders, it is our duty and privilege to serve our community; the Community Assistance Program is an extension of our mission,” explains Garret Caster, program coordinator and firefighter paramedic for Bend Fire & Rescue.  “Because the program is ran by firefighters already working on the streets, there is no overhead cost, and is sustained by private donations, grants, and fundraisers like this.”

“Bigfoot Beverages Bend is proud to partner, for the second year,” says Betsy Weedman, public relations and marketing manager for Bigfoot Beverages. “We encourage people to get out there, enjoy a refreshing Ninkasi beer and raise money to help our community.”

To take part in the program, beer drinkers are encouraged to order Ninkasi on-tap during the month of May throughout the Bend area. Locations that serve Ninkasi can be found by visiting: DrinkNinkasi.com.

Join the Kick-Off Party!
A Funds for Firefighters kick-off party will take place at Broken Top Bottle Shop, Friday, May 4 from 4 – 7pm. Enjoy Ninkasi pints, giveaways and an opportunity to meet Bend Fire & Rescue members. For every Ninkasi beer ordered, $1 will be donated to the City of Bend Fire Department.

About Big Foot Beverages
Bigfoot Beverages is an Oregon company rich in family tradition, steeped in community involvement, and an unwavering commitment to delivering quality beverages. Bigfoot is the story of two long-time Oregon families: the LeFevre’s and the Moore’s. They entered the beverage business decades ago.  Both discovered that they shared the same values, work ethic, and commitment to their employees, and support for their communities. Lewis Fullerton, an orchard owner, from Winston, Oregon, opened Fullerton Beverage in Roseburg, in 1947. In 1969, William Moore had already had a distinguished career with Coca Cola, Portland Bottling Company and Alpac Corporation, when he bought the Pepsi Cola Bottling Company of Bend, that serves customers in Central Oregon’s Deschutes, Jefferson, Crook, and Harney counties. In 1988, the Moore and LeFevre families purchased the Willamette Beverage Company, which included Pepsi distribution centers in Eugene, Coos Bay, and Newport.  Peter Moore was named president and general manager of the partnership, until he became chairman of the board in 2005. The companies would serve 10 counties and employ 300 people.