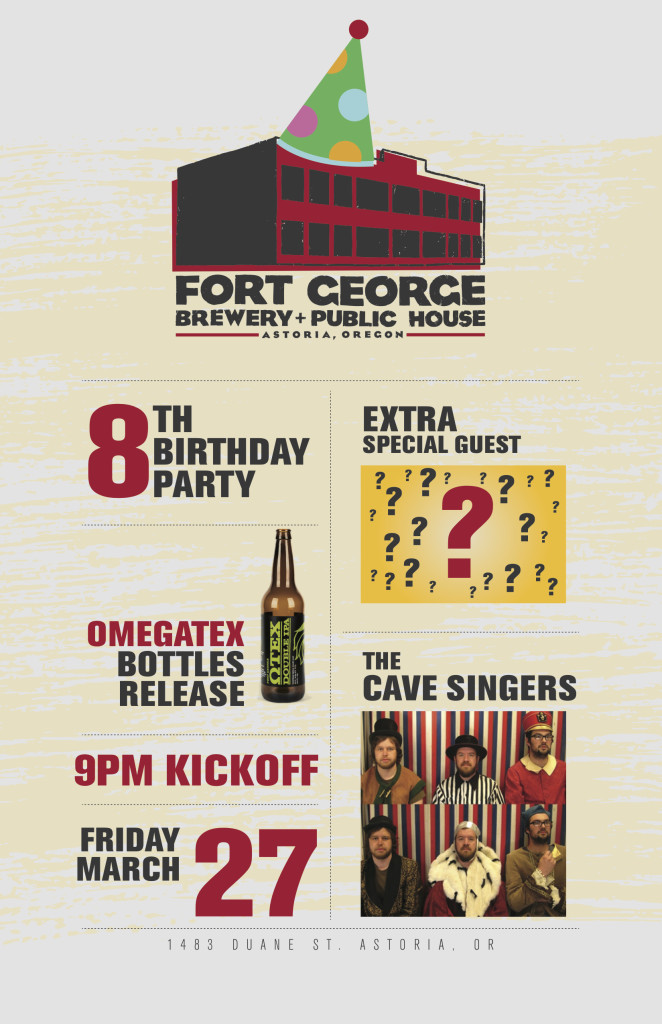 Get yourself ready for Fort George Brewery + Public House 8th Birthday Party on Friday, March 27th. This is a night not to miss for fans of craft beer and stellar live music as The Cave Singers perform live and Fort George releases OMEGATEX in bottles and on draft.

Fort George is turning 8 years young this March, and celebrating it in a big way – an OMEGA way. Seattle’s The Cave Singers will be holding down the brewery’s upstairs raised platform, with an Extra Special Guest to kick off the party at 9pm. Birthday partiers will want to arrive early as this will be another No Cover show at Fort George and will fill up quickly. In just the second year since the expansion, the Fort George upstairs pub overlooking the Columbia River has become one of the most unique music venues on the coast. Come out to celebrate the memories you’ve made at the now iconic n Astoria Fort George Brewery while toasting the memories to come.

Don’t know about The Cave Singers? They play that kind of gritty folk rock that runs deep in the walls of the old 1924 Fort George Building. Fresh off of playing the Crystal Ballroom in Portland, The Cave Singers groove like a juke joint and howl like a happy wolf. The Extra Special Guest opening act is no slouch as well. This ex-megabat is so special that the brewery is releasing no other information about the affair. Get there early.

March 27th will also mark the release of OMEGATEX in 22-oz bottles, direct from the source. Patrons of the Fort George will be able to purchase the Imperial IPA on draft and in bottles for the first time this year. This limited seasonal (like Vortex, only bigger) will be coming to Pacific Northwest stores near you in April.