Collaborations in the craft beer industry have become a regular occurrence over the past few years but when up the ante to bring in a third brewery for a three-way, its Fort George Brewery from Astoria, Oregon that leads the pack. Beginning back in 2013, Fort George released its first 3-Way IPA with two Portland breweries. Since this time the annual summer release from Fort George is one of the most anticipated summer beers in the Pacific Northwest. For its fourth 3-Way IPA Fort George invited Barley Brown’s Beer from Baker City, Oregon and Melvin Brewing from Alpine, Wyoming, two breweries known for its excessive use of hops!

Back in January the three breweries led by Chris Nemlowill at Fort George, Tyler Brown of Barley Brown’s Beer, and Jeremy Tofte from Melvin Brewing met at the Fort George Empire in downtown Astoria to begin the recipe development for what would become the fourth 3-Way IPA.

So how did this all go down? This trio is Straight outta Hopton. “Straight up, mad props for your hops. If your kettles had kicks, they’d dunk on Motumbo,” writes Nemlowill. Tofte goes on, “Word. All your ickies are stickies and your drank is dank.” And not to be outdone, “My Brewers! Bring it in,” writes Brown.

Each year the 3-Way IPA collaboration is based on mutual admiration. It’s a chance to share ideas and techniques with some of the country’s finest IPA brewers. Ultimately that knowledge is utilized in the brewing process and refined over the course of extensive beta batch testing. Four test batches were brewed this year, each with subtle changes to ingredients, amounts, and timing of additions.

The goal with the grain bill was to produce an ultra-pale color and create a simple yet solid canvas for maximum hop expression. 2-row barley is the base with additions of Pilsner, C15, and wheat (although Carapils was used in one test batch). A lower than average mash temp decreases the amount of residual sugar in the resulting beer. This allows the beer to have sweetness derived from the hop character rather than the malt. Astoria’s slow sand-filtered water is ideal for brewing. This was enhanced with gypsum and calcium chloride to decrease the mash PH and improve hop utilization.

When it comes to hops we all know how much these three brewers use and abuse them in some of their beers. Apollo hops were used for bittering (a high alpha hop that tends to exude grapefruit notes which contribute to an elaborate citrus character when interacting with the aroma hops). Then it was onto Simcoe and a lot of it. This addition is 2x the quantity of the 1st addition. Simcoe, Citra, and Mosaic, added later than the average 3rd addition to decrease bittering and magnify the juicy and pleasant citrus character. Dry Hopping was completed with a double dry-hopped with Galaxy, Mosaic, and Citra. These hop additions create peach, pineapple, and grapefruit aroma and taste. The second dry hop addition is roused with CO2 to boost the hop efficacy.

So what is the end result for the 2016 3-Way IPA? This is described as an unfiltered beer, pale in appearance, combining a balanced juicy body, superb lacing, and every citrus fruit aroma you can imagine. Give your beer its props – keep it cold-stored and drink fresh.

Now on to when this warm weather favorite will be officially released. Fort George Brewery will be on a traveling road show for three consecutive days with Chris Nemlowill, Tyler Brown, and Jeremy Tofte at each of these events. The 3-Way trip will begin in Boise, Idaho and end in Seattle, Washington with Portland being sandwiched in the middle. Here are the details. 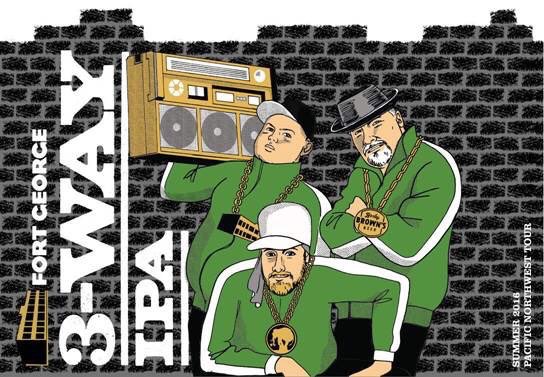