“Naturally Gluten Free From Grain To Glass” is the new saying on the neck label of the new Coors Peak Golden Lager. A few years ago Coors Brewing released its first 100% gluten-free beer, Coors Peak Copper Lager, to a few select markets. These markets included both Portland and Seattle, two cities that had already had award winning 100% gluten free breweries, Ground Breaker Brewing in the Rose City and Ghostfish Brewing in the Emerald City.

Earlier this year Coors released the latest 100% gluten-free beer in the Coors Peak portfolio with Coors Peak Golden Lager. When Copper Lager was released we were impressed with this offering from Coors. Using malted brown rice in lieu of sorghum or other barley substitutes, we felt that this offered a more complex yet easy drinking taste, especially when compared to the regular lineup of Coors branded beers.

Coors Peak Golden Lager is a true 100% gluten free beer that does not use an enzyme to remove most of the gluten particles as a few other breweries do. Hence that the label states that this is a gluten-free beer as thee others cannot. As its predecessor is brewed, Golden Lager is brewed with completely all-natural, gluten-free ingredients including California brown rice that is malted and Pacific Northwest hops.

“We spent nearly five years experimenting with different grains to develop a great tasting beer that is 100 percent naturally gluten free,” wrote Troy Rysewyk, MillerCoors manager of brewing technology and innovation. “We wanted to highlight the versatility of our signature brewing process and ingredients by developing additional styles. After considering multiple grain options including sorghum, amaranth and quinoa, we are proud to be the only major brewer crafting a great tasting, naturally gluten-free beer brewed from brown rice.” 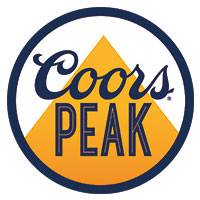 Golden Lager pours a bright, straw color that is balanced by a slightly sweet, roasted backbone that tasted similar to barley but is actually malted brown rice. The brewers add a mix of Pacific Northwest Hops that offers subtle citrusy hop characters. Best of all for those that suffer from Celiacs disease, both Coors Peak Golden Lager and Copper Lager are naturally gluten free from grain to glass and are certified gluten free by the Gluten Intolerance Group.

“The high demand to expand the Coors Peak line of products shows that the brand is doing an excellent job providing a quality beverage that meets the safety needs of the gluten-free community,” wrote Channon Quinn, vice president of food safety with the Gluten Intolerance Group. “We’re excited to give both Coors Peak Copper and Golden Lagers our stamp of approval and to help spread the word about this growing line of naturally gluten-free beers.”

Coors Peak Copper Lager and Golden Lager are currently available in the Portland and Seattle metropolitan areas. Golden Lager can be found in six-pack bottles, and Copper Lager can be found in both six-pack and 12-pack bottles at retail and in restaurants. For more information about Coors Peak, visit www.CoorsPeak.com and www.Facebook.com/CoorsPeak.