Now on store shelves is the second release from Firestone Walker Brewing’s Luponic Distortion series of evolving IPAs. Released every 90 days, the Luponic Distortion series is an IPA brewed with complete creativity each time. It’s a series of beers that allows Matt Brynildson and his brew team to experiment and allow their creativity to fly with using experimental hops. The goal of Luponic Distortion is to showcase the possibilities of pure hop aromas and flavors without any assist from adjuncts. To keep this experiment grounded, the base beer will always remain the same beer but it’s the different hop blends that will change.

Luponic Distortion No.002 is now out in the marketplace. This new version has had its hop profile altered to allow for a new twist in both aroma and flavor. The Paso Robles, California based brewery is secretive when it comes to which experimental hops that they are using in each edition. With Luponic Distortion No.002 the main hop used comes from the Pacific Northwest. “It has these vivid peachy flavors with tropical notes reminiscent of papaya,” Brynildson said in a statement.

The other hops used are from New Zealand and Germany. Of the seven hops in the blend, only two are carryovers from Luponic Distortion No.001. Plus Firestone Walker has never used three of the hops ever before brewing No.002. 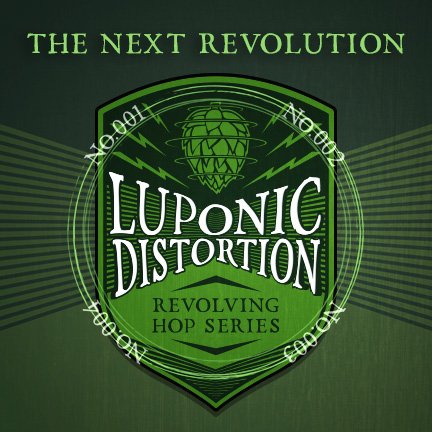 “This beer truly touches every corner of the hop growing world,” Brynildson said in a statement. “The southern hemisphere hops add these bright Sauvignon Blanc-like accents of grapefruit and gooseberry, and there’s this new variety out of Europe that ties everything together with honeydew aromas and an underlying herbal pine quality.”

Yet for all of the hop remixing, there is a core common thread that extends from Revolution 001 through Revolution 002. “If you compare them side by side, it’s not like tasting a totally different beer, but rather an evolution of the same beer,” Brynildson continued.