Birds of a Feather

It’s been a tough year. At times we’ve felt like caged birds with clipped wings yearning for the open sky. But thankfully summer is almost here, the brewery is packing the tanks at the Astoria waterfront, and nothing will stop 3-Way IPA from soaring across the Pacific Northwest. Not even a lack of functional wings.

Although it’s a summer seasonal, 3-Way IPA collaborations always start in the fall. Joining Fort George this year is Varietal Beer Co. out of Sunnyside, WA and Moonraker Brewing out of Auburn, CA.

“These are two fantastic breweries that make soft and refreshing IPAs, but with their own unique spin on them,” explains Dave Coyne, R & D brewer at Fort George.

Both breweries bring their exceptional IPA expertise to the project, and their insights into some new hops and malts.

“They’re equally impressive with a dexterous use of hops,” Dave adds. “We wanted to see what would happen combining all three of our processes into this collaboration. And we feel like the end result is a great balance of soft mouthfeel, dry finish, and pungent aroma indicative of each brewery’s style.”

With a variety of ingredients to try out and multiple test batches to brew, the Fort George pub system stayed full of Beta IPA batches all winter long. Moonraker suggested a new hop variety from the Southern Hemisphere called Nectaron, and the group couldn’t resist. In fact, over 6,000 pounds of freshly pelletized Nectaron from this year’s crop are being air freighted as you read this, from New Zealand to the Mouth of the Columbia, so they can be added to the dry-hop. Varietal turned everyone on to some Elwha River Naked Spelt from LINC Malt, a hulless variety that’s both organically grown and local. Both ingredients blended beautifully into the recipe, which includes Strata, Simcoe, Comet, and Mosaic in addition to the Nectaron.

Crowlers from each test batch were over-nighted to the other breweries throughout the process, allowing for copious notes and quite a few tastings over Zoom. And after five Beta IPA test batches, this summer seasonal was finally ready to leave the nest.

Pour yourself a pint and you’re captivated by the vivid body of the beer on full display, an effervescent bright-orange color capped with a white tufted head. Waves of peach and sweet orange peel lift your senses. On the beak, a feathery soft citrus zest blends with lush berry notes, white grape, and just a tickle of grapefruit. And all the while, 3-Way IPA remains as graceful and balanced as a sage grouse in the desert shrub strumming on a headless guitar. 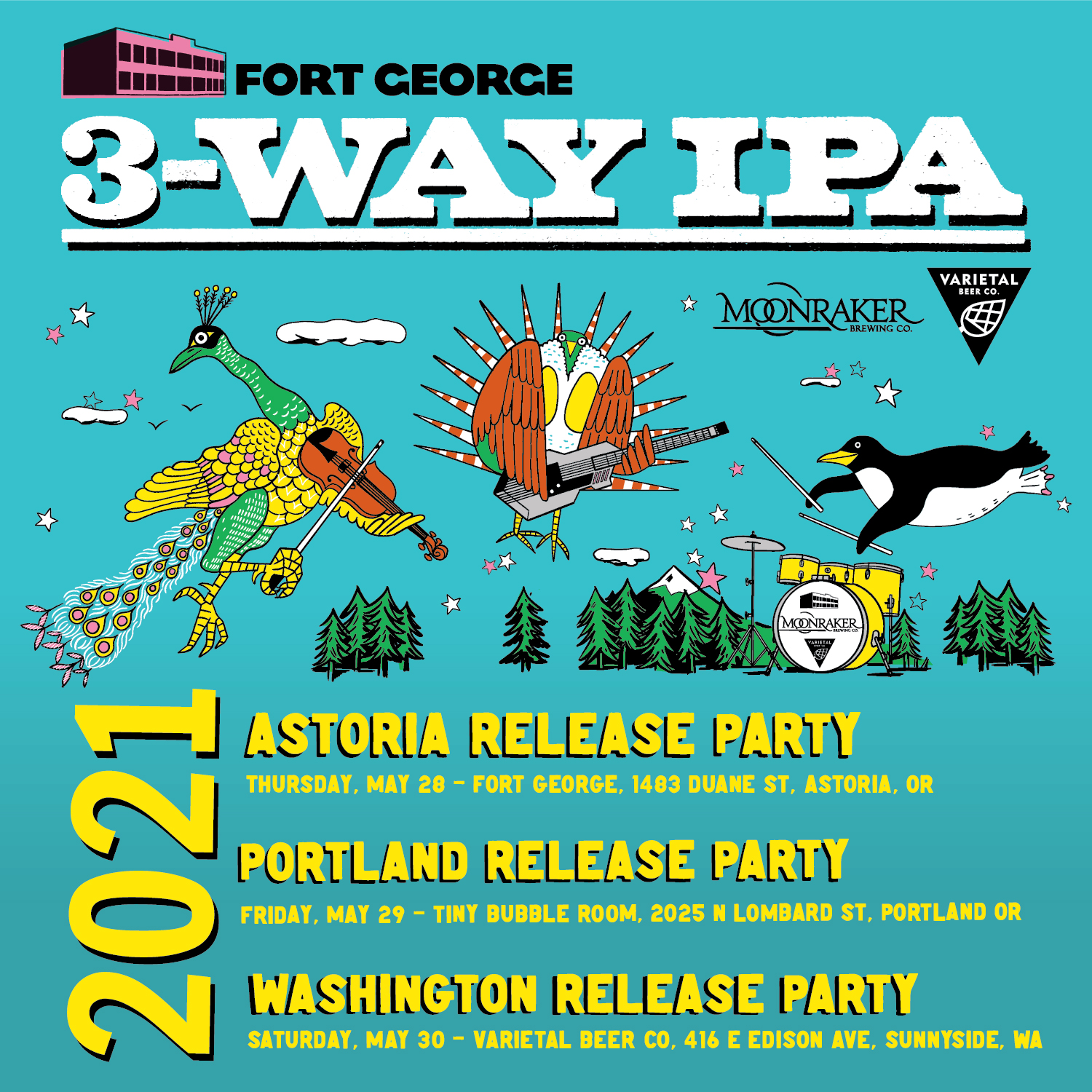 The Peacock Has Landed

Then follow us to Portland for a release party at the Tiny Bubble Room on Friday, May 28th. Space will be limited, but we’ll do the best we can to accommodate those looking to purchase a 4-pack. The congregation then flocks to Sunnyside, WA on Saturday, May 29th for the Washington release party at Varietal Brewing.

And don’t think we forgot about you, California. These birds will all be flying south for summer and a release party at Moonraker on Saturday, June 19th. Oh yeah, 3-Way IPA is migrating to Northern California this year for the release parties, and maybe a peck more.

It doesn’t take an ornithologist to know that this beer will be limited. Look for 3-Way IPA all over the Pacific Northwest (with a little bit in Northern California) starting June 1st and through the end of August. Head to FortGeorgeBrewery.com for more details and more bird puns.