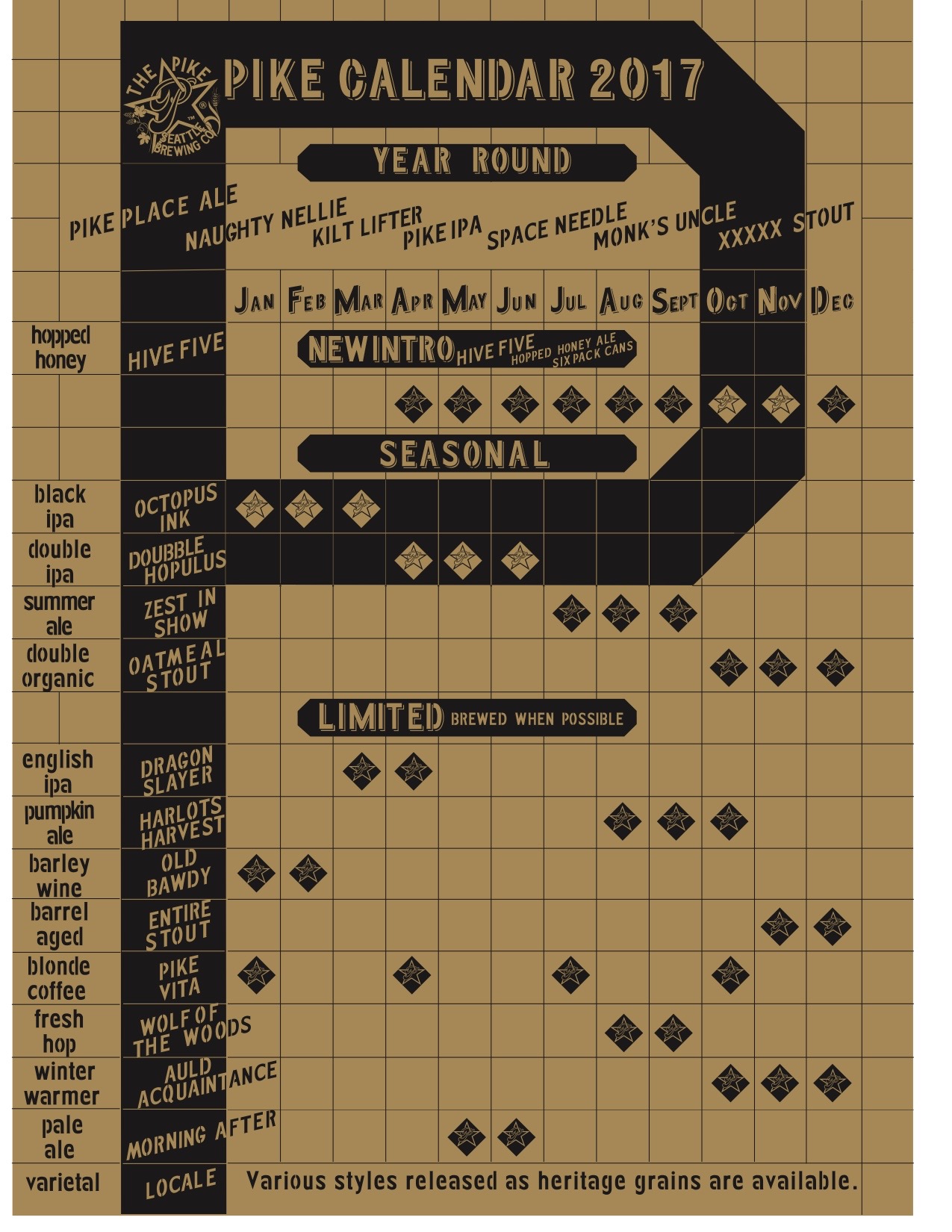 Pike Brewing, one of Seattle’s longest running craft breweries, has been brewing at the historic Pike Place Market since 1989. The brewery that was founded by Charles and Rose Ann Finkel has some exciting plans in store for 2017. Its brew team has developed a lineup of beers that includes its core brands, new and returning seasonals and limited release beers for this coming year. 2017 also will see a new cellar space that will allow the longtime brewery to experiment with different beers and new styles.

First out of the gate in seasonals is Octopus Ink Black IPA. Then in March Pike Brewing will add Pike Hive Five – Hopped Honey Ale to its year-round lineup.

Here’s a peek at what to expect from the iconic Pike Brewing in 2017.

SEASONAL LINE UP
A new beer every quarter, brewed to pair with the season’s foods, moods and activities. All Pike Brewing seasonals will be available on draft and in 22 oz. dinner bottles.

Pike Doubble Hopulus – Double IPA
Available April 2017
This double IPA is like a sunny vacation in the middle of winter. A bright, apricot colored beer, Pike Doubble Hopulus derives enticing flavors and aromas of stone fruits, pine and melon from its complex hop blend. Our brewers have balanced these tastes with rich malt flavors which will bring you back sip after sip. This layered and smooth IPA clocks in at 8.5% ABV and is brewed with Chinook, Falconer’s Flight and Simcoe hops and then dry hopped with more Simcoe and Amarillo.
ABV – 8.5%
IBU – 80
OG – 1.076
°L – 5.5

Pike Zest in Show – Summer Ale
Available July 2017
Light and lemony for summer time! A sessionable summer ale, Zest in Show has a clean and round mouthfeel that pops with citrusy hops. Crisp and bright in your glass with a beautiful white head, it’s Seattle summertime in a glass.
ABV – 4.5%
IBU – 26
OG – 1.046
°L – 2

Pike Hive Five is a tasty collaboration between Pike and Salish Lodge & Spa, whose bees provide the delicious honey for this beer. Pike Hive Five made a small debut last spring as a seasonal release. It was very well received and won a Gold Medal at the Washington Brewer’s Festival. The superb honey from the Salish Lodge & Spa beehives adds dimension to the biscuity flavor of wholesome malt and aromatic Yakima Valley hops. Pike Hive Five pours a light gold color and pairs well with salads, seafood, nuts and cheeses. Pike Hive Five will be available in 12 oz. cans and on draft beginning in March 2017.

Pike Locale – Farmer Direct Varietal Beers
Malt is the soul of beer and in 2017 Pike Brewing will continue our pioneering Pike Locale series, which focuses on varietal beers brewed to showcase the unique flavors of locally grown malts and hops. Pike Brewing partners with local farmers and craft maltsters and we’ll release more beers in this farm-to-tap series as these heritage grains become available.

Pike Vita – Blonde Coffee Ale
What could be more Seattle than coffee beer? Pike Vita is a collaboration with local coffee roaster, Caffe Vita. We make ours blonde, a unique take on a coffee beer, and one that highlights the interplay between the bright notes of Vita’s single origin coffees and locally sourced hops. Pike Vita will be available as brewing allows, primarily on draft but possibly in 22 oz. dinner bottles.

Pike Dragon Slayer – English Style IPA
Available March & April
Slay your dragons with a Pike! This British style IPA is brewed for a Northwest palate and to commemorate Saint George’s Day. Cascade, Centennial and Summit hop aromas will welcome you to this glass that has a biscuity malt flavor.  This balance of malt and hops, combined with an ABV of 5.8 %, make Pike Dragon Slayer IPA a very drinkable IPA. Dragon Slayer is available on draft only.

Pike Wolf In The Woods – Fresh Hop
Available September
Autumn is hop harvest season and an annual time to craft beers which singularly capture the hop’s most delicate flavors and essence. Moving quickly from bine to kettle, brewers must use their freshly picked hop flowers within 24 hours of harvest. Every year Pike Brewing Company chooses a specific hop to brew with and beer style to complement its flavors and aromas. Wolf In The Woods is available on draft only.

Pike Entire – Barrel Aged Stout
Available in Winter
Pike Entire is smooth and chocolaty –  reminiscent of small-batch bourbon with its vanilla and wood overtones. The 2016 vintage was made by aging Imperial Stout in whiskey barrels, which impart creamy vanilla and whiskey flavors. After aging it is blended with Pike XXXXX Stout to round out its flavors. Pike Entire is available towards the end of the year, on draft and in 22 oz. wax dipped dinner bottles.

Pike Old Bawdy – Barley Wine
Available in January
This traditional ale is fruity and rich with more of everything – malt, hops, yeast and hearty flavor. Before your first sip you’ll enjoy its wild herb aromas. Pike Old Bawdy has roasted and toasted flavors balanced by rich malt and just the right measure of hops. Perfect for cellaring. Pike Old Bawdy is available on draft and in 12 oz. bottles.