Raptor IPA attacks your palate with a full on assault of Denali, Bravo and Centennial hops. Twenty percent Rye malt provides a spicy balance to the intense citrus notes, while a clean dry finish begs another pint. A rotating seasonal available on draft and in 22 oz bottles January thru April. 6.2% ABV 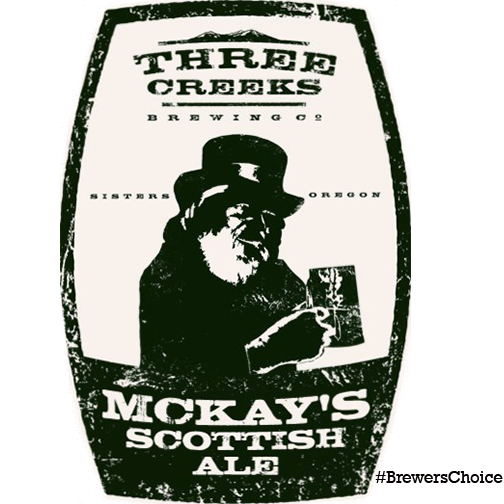 McKay’s Scottish Ale is our annual tribute to loveable local Don McKay. This Scottish style ale was brewed with loads of Caramel, Munich and Scottish base malts along with a touch of Smoked Malt. A 2-hour boil accentuates the rich caramel flavors while a hint of smoke inspires you to throw on your kilt, fire up the bagpipes and have a pint (or two!) Available January on draft. 8.0% ABV

McKay’s Scottish Ale is a member of Three Creeks Brewing’s new Brewer’s Choice Series, a series designed to let our Brewers do what they do best… create new, unique beers using specialty ingredients and innovative techniques.

Born in the heart of Sisters, Oregon, renowned for the region’s brewing fame and gateway to Central Oregon’s Beer and Adventure, Three Creeks Brewing crafts classic Northwest ales under the “Blaze Your Trail” motto. The relentless pursuit of uncompromising quality craft beer that never goes out of style. These ales can be found throughout Oregon, Southwest Washington, and Southern Idaho.