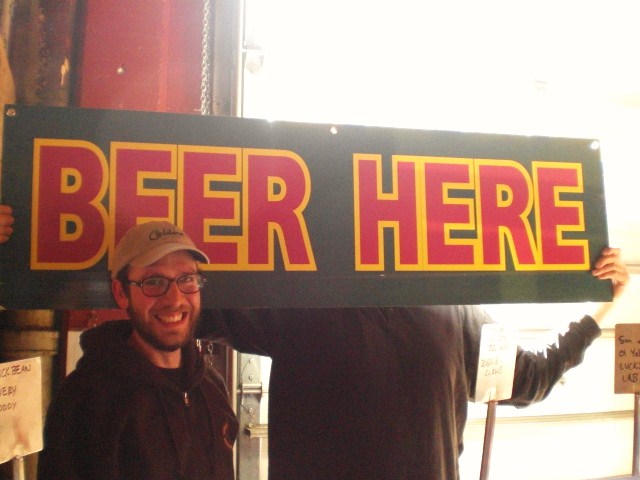 In case you missed it (and your liver might thank you if you had), Lucky Lab’s Barleywine and Big Beer Fest this year was a huge success. Everything you’d expect from a beer festival, the selection was exceptional, the atmosphere was welcoming, and the crowds were not overwhelming. 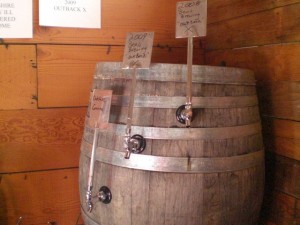 he event kicked off for the 13th annual installment on Friday March 5 at noon and lasted until 11PM before recommencing again the next day, again at noon. We did not attend the first day of the festival in fear of us not being able to return for our volunteer shift Saturday. Saturday the weather was spectacular, and a bicycle ride across town to the fest was invigorating. The warm sun shined through the partially opened garage door of the spacious brewpub on NW Quimby Street; a hearty and well needed beer fest was underway. A few people made their way to the tables as the event kicked off. These folks were the beer geeks who live for this kind of thing, some of whom were still recovering from the previous day’s samplings. 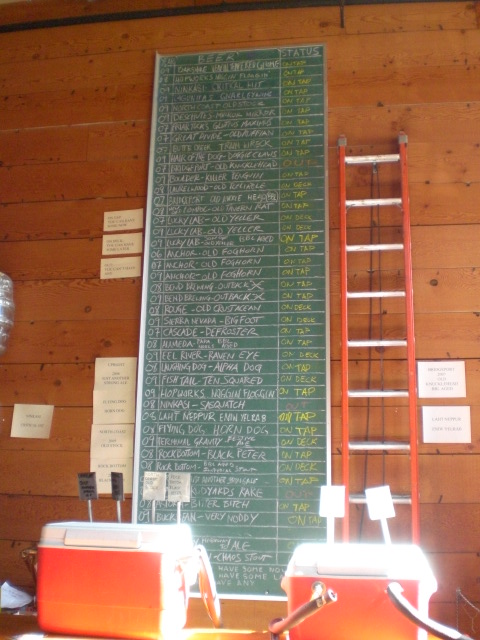 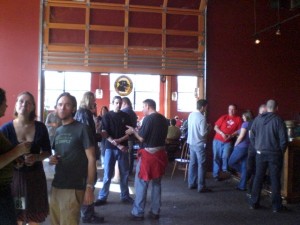 e were excited to garner responses from the range of tasters to get a pulse for what bold beers were ones we’d need to try after our shift commenced. As can always be expected when volunteering at any beer festival, some people are very passionate about their reviews of what they’re tasting. With some it is a welcomed well-rounded assessment of the qualities that exemplify a worthy or undesirable specimen. With others, the response seems to be knee jerk and not as founded in research as it is based on emotion or product loyalty. Good thing folks there like Beer Advocates Theo Skourtis and Jim Bonomo were on hand to give some constructive feedback we could use. 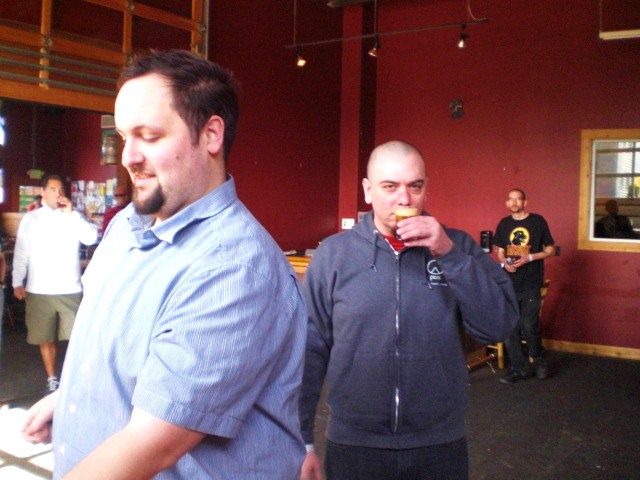 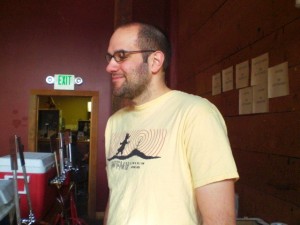 Every so often another keg would run dry and Preston Weesner or Lucky Lab’s Ben Flerchinger would come by to change it and mark the update on the impressive chalkboard behind us. The list of beers was so extensive, they would need to climb a ladder to make amendments. We were crossing our fingers, hoping we’d get to try the popular brews before they kicked. The general response of the crowd seemed to indicate these were the ever-popular Hair of the Dog Doggie Claws (this time aged in bourbon casks), 2006 Anchor Old Foghorn, Ninkasi Critical Hit (their first ever barleywine available in limited quantities), and Lucky Lab’s Son Of Old Yeller (which we had already tried and could confirm was going to be spectacular). As a keg of 2007 Cascade Defroster sputtered to a halt, Walking Man’s Olde Stumblefoot took over. It really is amazing to see how much respect folks have for Walking Man, as an impromptu line formed almost immediately to sample this behemoth. If it was anything like we remembered it in the past, it was a dry-hopped beaut that demanded our palate’s attention. 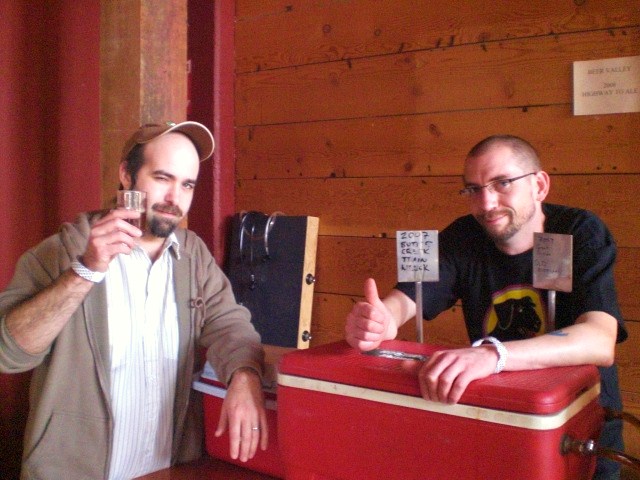 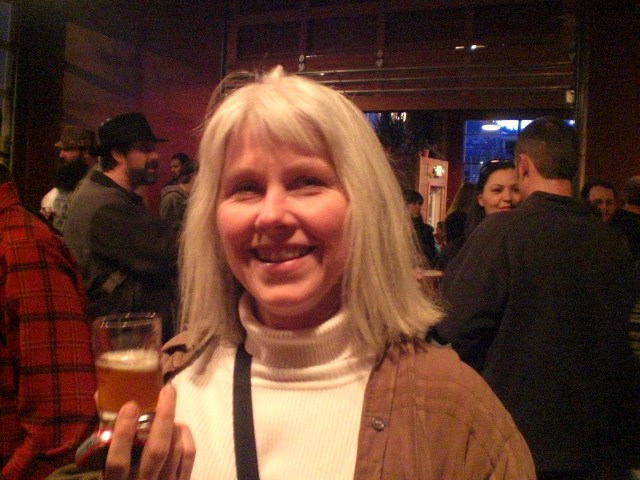 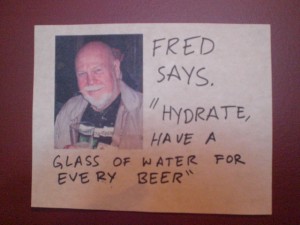 As 3PM and the end of our shift neared, the crowds grew bigger and our thirst for the beers we’d been eying all morning intensified. Finally, we were off, and able to aboutface the counters and start a-quaffin’. The first sip was the 2006 Foghorn, which, along with the others mentioned previously, was surprisingly still flowing. Simply marvelous! A rusty orange body with a soft off-white head, this four year old beer aged magnificently and showed little to no signs of oxidation. Lots of fruity, chewy bubblegum notes coupled by soft, subtle complexities imparted with age. Some butyl esters coupled with a gentle hoppiness and a solid underpinning of toffee-like maltiness. Old Foghorn is always a go to for us, and we are glad again in this case, we went for it. 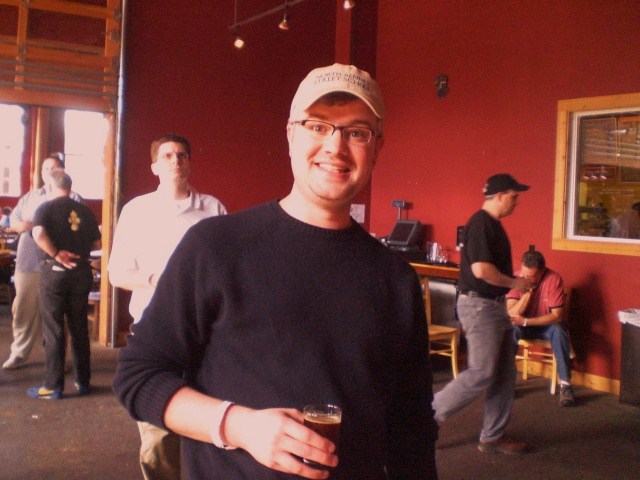 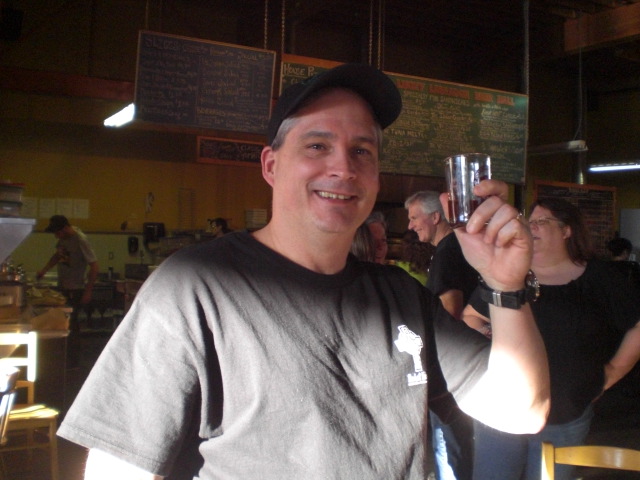 Following the Old Foghorn was the Hair of the Dog Doggie Claws aged in bourbon barrels. This rendition of the brew poured out a murky thick brown-amber with a thin soapy off-white head. Fruity, malty, chewy brown sugar nose with lots of floral citrus and pine hops going on. Big and bold. Sweet and complex. Vanilla, citrus, sugar, molasses, and raisin to name a few. Not aggressively bourbony, more on the wood side. Every time we get to try Hair of the Dog beers like this, it makes us happy we live in Beervana. 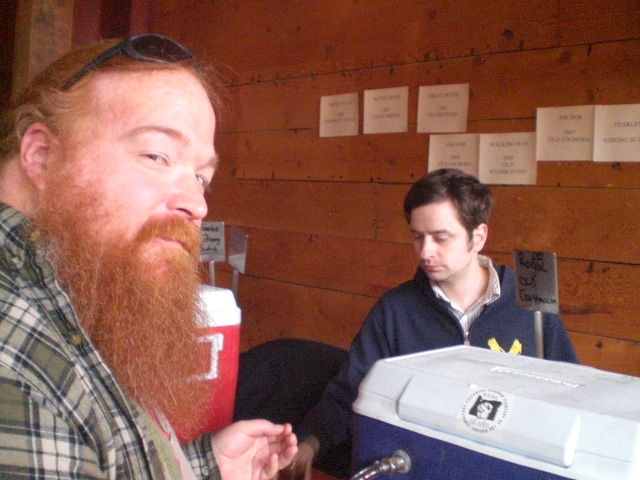 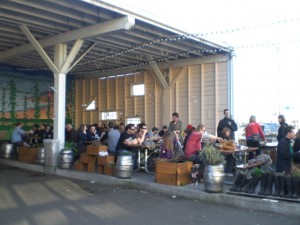 Save for Astoria Brewing’s Bitter Bitch Triple IPA, Ninkasi Critical Hit, from what we gathered, was one of the hoppiest brews at the fest and likely the hoppiest barleywine. Lots of toffee and piny tropical fruit notes came from this deep tawny beer. This beer could have almost passed for an triple IPA, but there was some noticeable caramel maltiness present. Very bitter on the tongue, but overall, this is the kind of barleywine many Pacific Northwestern beer lovers like, and Ninkasi ain’t no dummy. 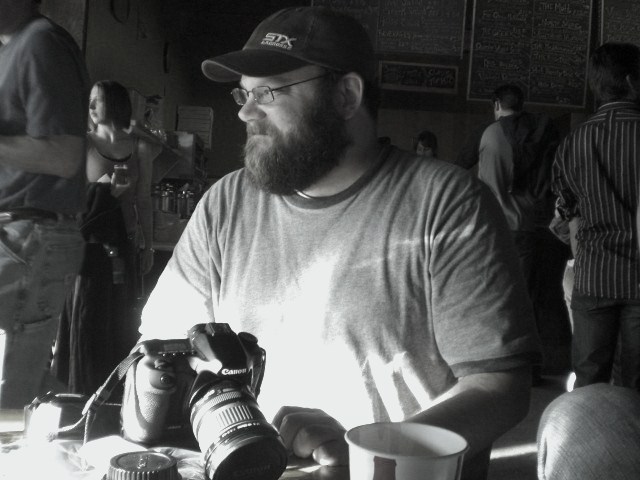 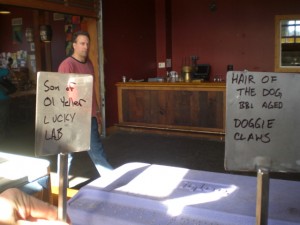 Walking Man Olde Stumblefoot is another hop-forward barleywine. However, a main difference between this beast and Ninkasi’s is the malt bill and the perception of the hops play. According to a description, Olde Stumby makes use of four malts, dark belgian candi sugar, Northwest hops.  At 12.3% ABV, this Stevenson, Washington brew contained almost 2.5% more alcohol by volume than the average beer at this festival. On top of that, the 85 IBUs was indicative of a potent hops dosage as well. In the glass appeared a rich amber-bodied sipper with a small almond colored head that left plenty of lacing and exhibited big legs. Full, rich creamy body with a nice chewy, robust finish; noticeable were the dry hops in the nose that caressed the olfactory senses before each sip. Thanks again, Walking Man. We do love thee. 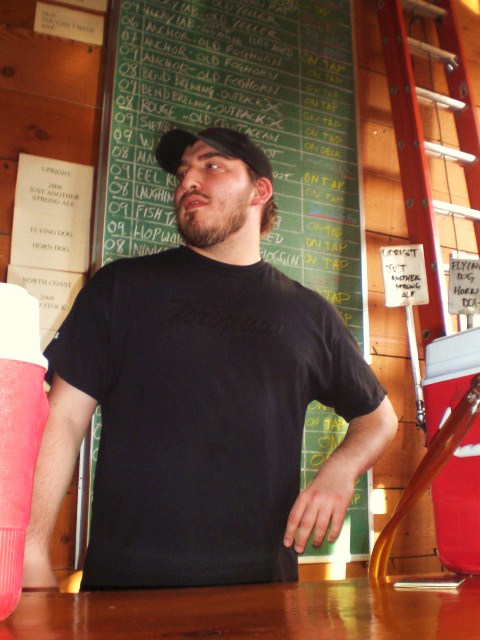 A beer we’d tried, but didn’t want to miss again was Lucky Lab’s Son of Old Yeller, a beer that turns out was a fabulous mistake. An accidental overshoot of ingredients for LL’s popular Super Dog IPA, the Son was a perfectly balanced copper-amber beer with a rich frothy white head. Also aged in bourbon barrels, Son was undoubtedly the buzz beer of this year’s festival. It was kind of nice to see this beer win people’s hearts and tongues…kind of like how the Canadians must’ve felt about their hockey team at this year’s Olympics. 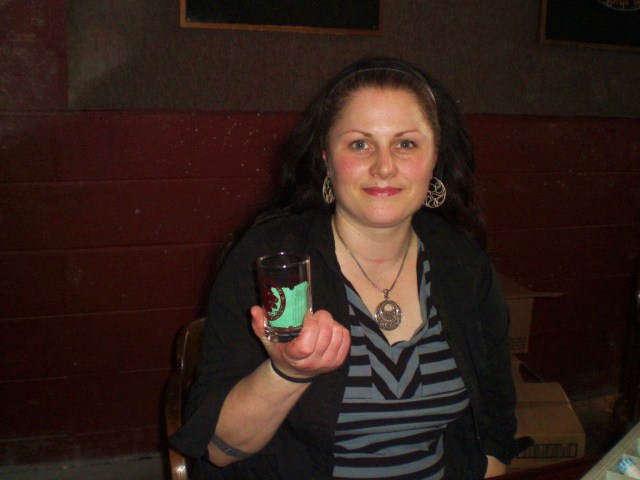 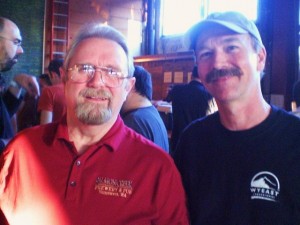 other beer of note was the 2007 Butte Creek Train Wreck, a certified organic 10.6% ABV warmer. We are still surprised upon viewing the label on these bottles that the TTB allowed this beer to state “You’ll be lucky to walk away from this one!” but we dig the smart Alec marketing that coincides with BC’s “Go big or go home” mantra. In all honesty, this beer was not hyper aggressive on the tongue. Perhaps this is due to the three years of aging it underwent to reach this point. The deep brown color under a minimal head offered a unique mesh of chewy maltiness, dropped out yet prevalent hops and a distinct mintiness that could have been equated to the citrus hops mingling with the boisterous and once aggressive malts. We think we’ll pick up a bomber of this brew and try it fresh…maybe even put one down in the cellar as well. 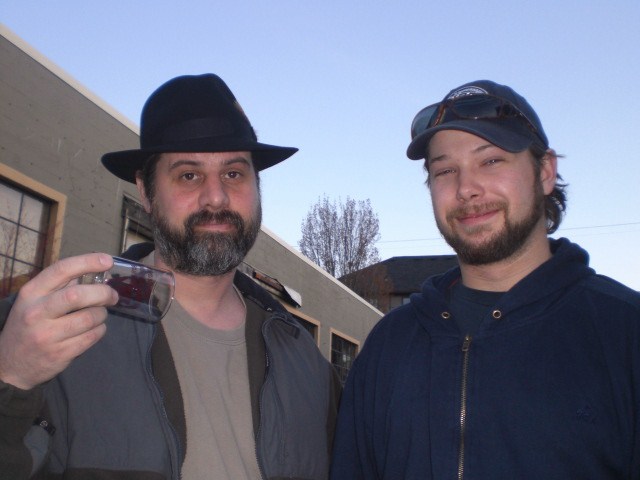 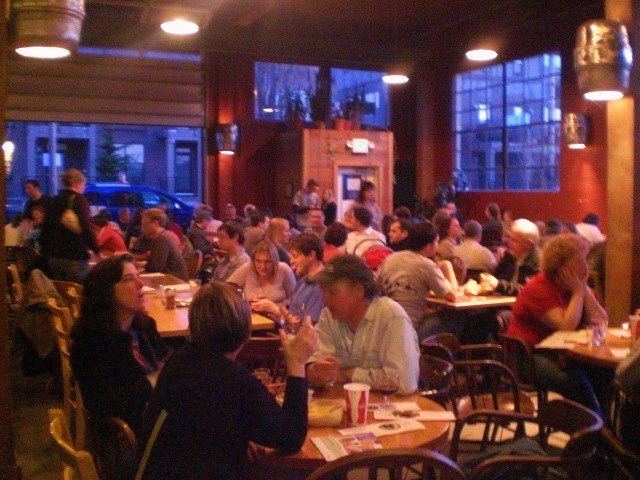 So, there’s a glimpse at just a few beer from the Barleywine and Big Beer Festival. To us, this event is more about the camaraderie of good friends where the skullstompin’ brews serve to aid in the good times. It doesn’t take much to get you where you’re going, and if you are on a bicycle, you best watch your limit. A big thank you to Ben Flerchinger, Lucky Lab, Preston Weesner, and all the breweries, volunteers, and attendees who made this year’s BB+BW Fest a monster hit! 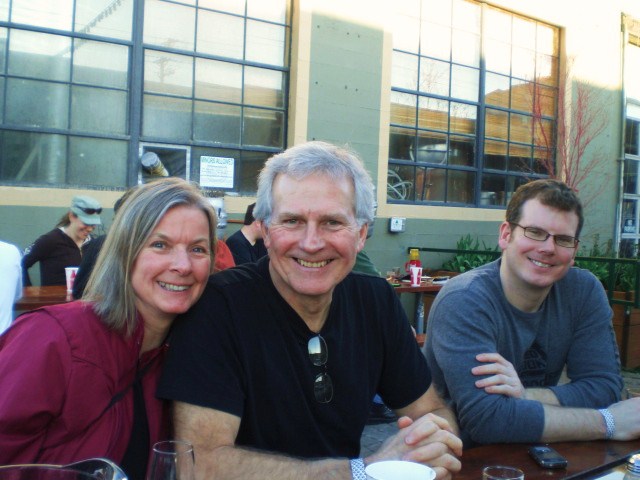