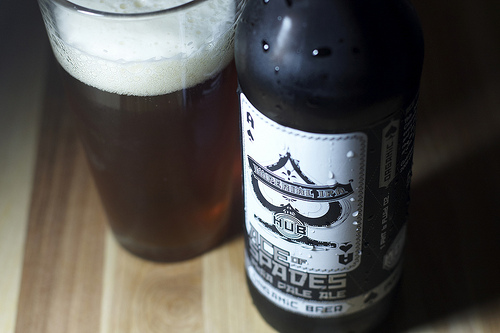 Hopworks Urban Brewery’s (HUB) award-winning Organic Ace of Spades Imperial IPA will be available beginning Monday, March 7 on tap and in 22-ounce bottles at select bars, restaurants and stores across the Northwest. The limited release beer won a gold medal at the 2009 Great American Beer Fest in the Imperial IPA category and is an annual favorite with beer enthusiasts across the region.

Named in honor of rock n’ roll icon Lemmy Kilmister and his band Motörhead’s popular song and album, Ace of Spades prominently features Amarillo, Cascade and Centennial hops, added at every point of the brewing process: mash tun, first wort, kettle, and dry hop. All of the hoppy green goodness results in a beer with a huge citrus hop aroma, flavor and deep, clean bitterness.

Hopworks Urban Brewery (HUB) is Portland’s first Eco-Brewpub. HUB offers an assortment of award winning, world-class beers made from organic malts and locally-sourced hops on draught and in bottles across the Pacific Northwest. HUB incorporates a range of sustainable practices in the production of its beer and brewpub operations and makes every effort to protect “our” future with a thoughtful alternative. The 20-barrel brewery produces 6,400 barrels a year and provides the SE Portland brewpub with ten different HUB organic beers on tap and two cask ales at all times. In early summer, Hopworks will open its second location, Bike Bar in North Portland, expanding the company’s love of beers, bikes and the environment.