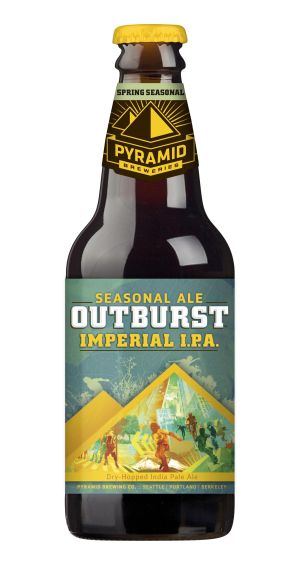 Pyramid Breweries welcomes Outburst Imperial IPA as its new spring seasonal. After debuting in early 2010 as the second offering in Pyramid’s limited- availability, draft-only Ignition Series, this dry-hopped IPA is poised to introduce itself to a wider geography of better-beer drinkers. A crafty combination of four different hops along with a dose of dry-hopping powers Outburst to 80 IBU strong. Its bold profile offers an aroma reminiscent of the Northwest hop fields at harvest time, along with spicy overtones of fresh citrus. Seeking a harmonious balance to the hop overload, four different specialty malts are blended to create a distinctive deep amber hue, and sweet caramel and roasty flavors. “Brewed with an astonishing four pounds of hops per barrel, Outburst is a fantastic beer,” said Simon Pesch, Head Brewer at Pyramid Brewery in Berkeley. ”This recipe has been fine tuned for years, and after several refinements and a great launch as part of our Ignition Series, many more hopheads can enjoy the bold taste and complex balance of Outburst this spring.” Outburst will be available from February – March, leading the charge for Pyramid’s 2011 seasonal line-up, including: Curve Ball ® Blonde Ale, summer; Juggernaut ® Red Ale, fall; and, Snow Cap ® Winter Warmer, winter. Outburst is available on draft, in 12oz and 22oz bottles, 6- packs, 12-packs, and as the seasonal guest in the Winter Variety 12-pack – alongside of Haywire ® Hefeweizen 1 , Apricot™ Ale, and ThunderHead ® IPA.

Be one of the first to sample 2011’s Outburst IIPA at Portland’s MacTarnahan’s Taproom on Wednesday January 19 from 6-9PM.

Free samples and $3 pints will be made available, along with live entertainment, raffles (including Blazers tickets) and special appetizers made with Outburst.