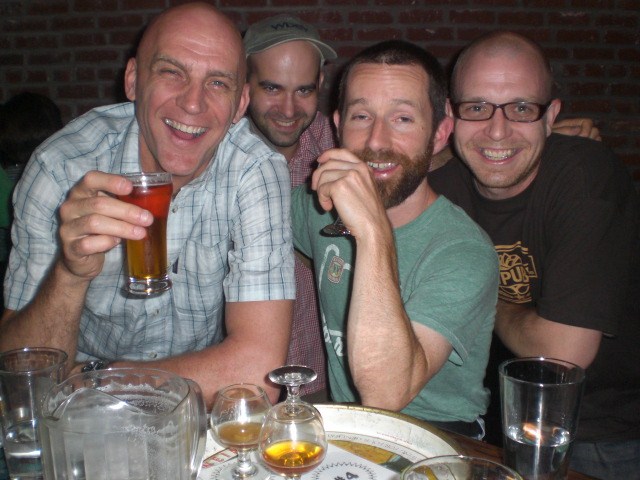 It’s somewhat hard to believe that Oregon Craft Beer Month is about 60% complete. In one sense, the month, and summer has flown past us here in Oregon. With a late start to summer that, save for three 90 degree days, has been rather cool and reserved. However, in some ways, it’s amazing how many events have occurred so far here in Oregon, and with the biggest festival, the Oregon Brewers Festival, still to come.

For craft beer enthusiasts here in Beervana, the biggest “problem” is having too many options; multiple events each day and with only limited time and liver capacity to soak it all in. So, it is important to rely on careful planning and preparation in order to maximize the potential of each fortuitous July day. It is also key to accept the fact, that you will miss out on some events you’d really hoped to make it to, and do the best that you can. In some ways, it’s akin to a craft beer-minded tourist visiting Portland for a weekend, having never been before, and trying to sort out what places to venture. It’s a laborious task that requires both stamina and flexibility (yeah yeah, we know). 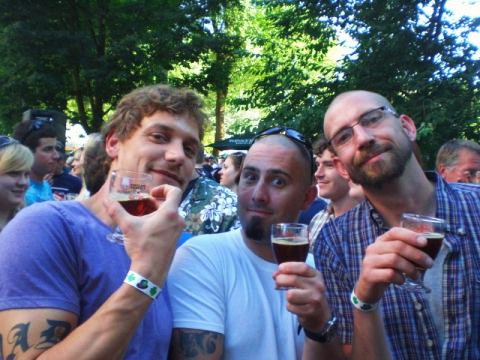 This past weekend was another big adventure in beer that really hasn’t seen a hiatus for us since… Not really sure. Between the Portland International Beer Fest (PIB) and Saraveza’s Imperial IPA Fest (IIPA Fest), we’re left anxiously looking ahead to the remainder of this wonderful month. 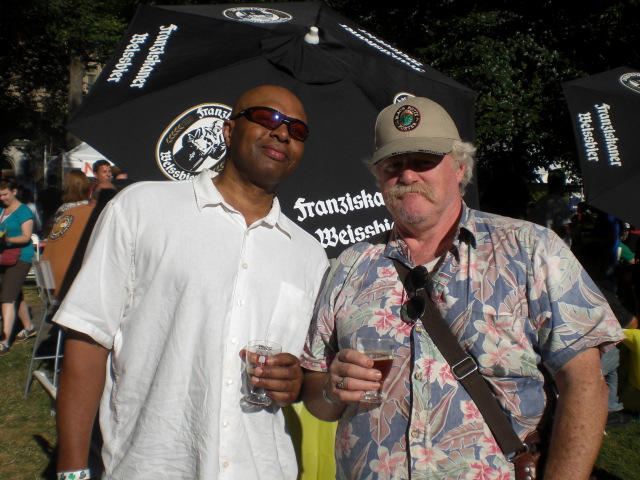 Friday afternoon, we arrived at the fest upon the gates opening to the masses. As many have previously noted, and we have as well, arriving early on the opening day of a beer fest offers a relaxes, low stress atmosphere where you wind up running into a lot of beer geeks and industry folk who also know this virtue. So, on Friday, we scoped out the pleasant grounds of the North Park Blocks, a setting where kindly looming trees offer plenty of shade, but there is also ample sunshine to soak in if desired. This festival is well run with little notable belligerence if 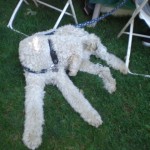 any.There’s a distinct culture, or perhaps aura, amongst festival goers here in Portland that focuses on community and appreciation for artisan brews. We’ve been to festivals in other regions of the country that played more like a drunk fest. In Idaho Falls, Idaho at the Mountain Brewers Beer Fest, we can recall several inebriated folks dipping their mugs in the dump bucket near the end of the festival. This is something, thankfully, you don’t see here. PIB is a relaxed atmosphere with lots of well behaved people and well behaved canines. 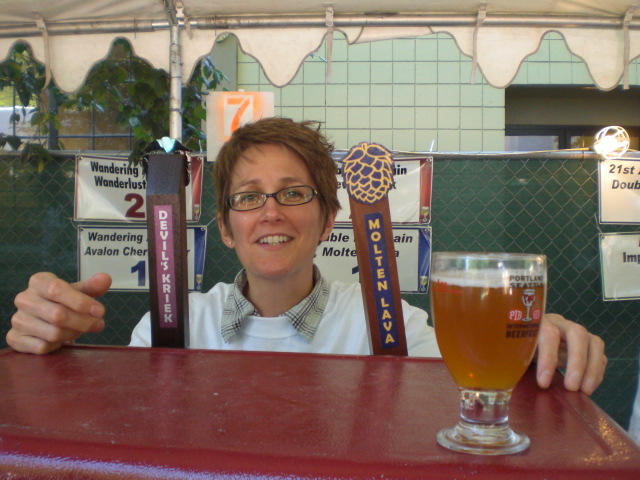 As far as the beer, this year’s fest was a little thinner on the mindblowing selections we’ve witnessed in years past, but this only proves the high bar to which the organizers have set for themselves. With some imported bottle beers costing multiple tickets, this year we opted to go for the taps, mostly in the one-ticket realm. Here’s what we viewed as some highlights: 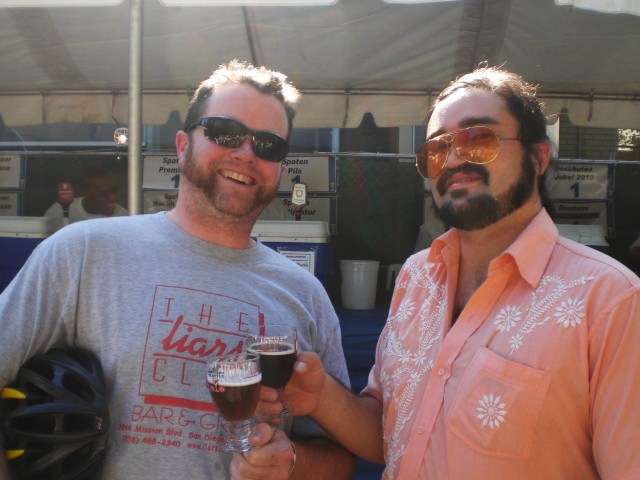 Flyers Kentucky Uberfest: From Oak Harbor, Washington’s Flyers Restaurant & Brewery on Whidbey Island, this was the steal of the show for us. A traditional English-style barleywine brewed with bourbon-soaked oak chips, brewer Tony Savoy concocted with beer with inspiration from PIB organizer Rick Carpenter where it gets its name. Carpenter also runs Uber Tavern in Seattle, and this dark chestnut beer with a lavish creamy head and bold boozy oaken notes was designed initially for the bar. For just one ticket, this was one of the few beers we went back for multiple samples of. 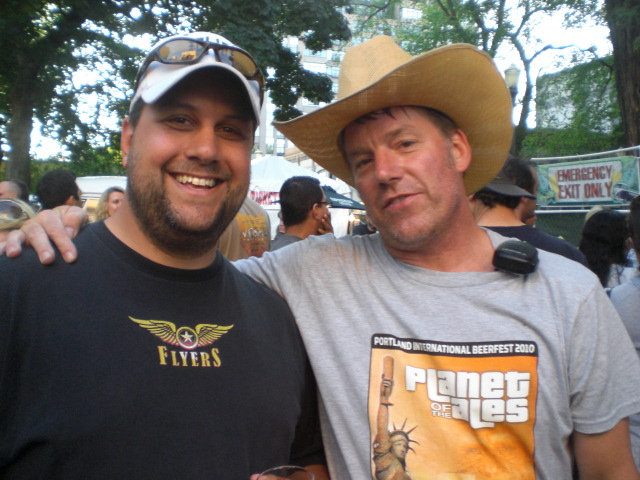 Ninkasi Maiden the Shade: It’s easy to see why Ninkasi Brewing has a cult following here in Oregon. Not only do they have some of the nicest and hardest working folks in the business working for them but their uncanny skill at bringing generously hopped ales into the mainstream. One of the longest continual lines for PIB was the one leading to Maiden the Shade, a 7-hopped quencher with an adequate malt spine and a bounding floral nose. At 6.8%, 72 IBUs, this beer was a hit right off the bat, when it debuted last summer at the Oregon Country Fair. Also for just one token was a lesser known Ninkasi Strong Ale. 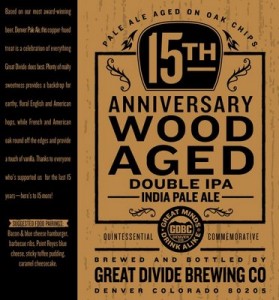 Great Divide Oak Double IPA: This beer for one ticket was well worth it, just as was Great Divide’s Chocolate Yeti Imperial Stout. Big, chewy malt character over run with a mighty hops girth and the pleasantry of creamy oakiness made this beer a stand out. Not necessarily a hard to find beer, but every brew can’t always be about rarity. This Double IPA is one you could be contented just sniffing at for a while. We’re planning a trip to Colorado in November and one of our most anticipated stops is Great Divide Brewing in Denver.

Laurelwood Workhorse IPA: Four ounces of one of the best IPAs in Portland for one ticket? Sold. Perfectly balanced combo of amplified hops and underpinning malts, this IPA rolls without too much of the catty, onion-garlic high alpha aroma hops you see trending these days. We feel this beer strikes the perfect balance and we absolutely love it. Laurelwood was also pouring their Green Elephant IPA, which is also amazing. Hop heads rejoice, for this is one hell of an India Pale Ale.

Hopworks Mystery Bourbon Barrel Aged Beer: This HUB beer could have easily been the best beer at PIB. A light, bodied, golden-orange hue with an out of this world nose of orange, tangerine, soft pine, and a flower bouquet. This beer was the last beer of the fest for us, and sent us 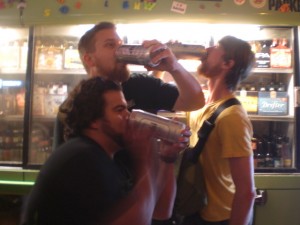 on our way with a smile on our face. The bourbon character was quite subdued buy just hinted at in the background. Garnering both attributes of drinkability and complexity, this beer… oh, this beer…Just one ticket. Think we’ll ever see this brew this cheap again? 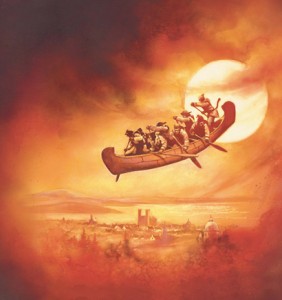 Unibrou Maudite: Unibrou’s Maudite is a beer we love to sip on during the autumn months. From Chambly, Quebec, Canada, this strong dark chestnut hued beer possesses a prominent malt character in both nose and flavor. Hints of orange zest,  fragrances of coriander and cloves, and adequate floral hop notes prelude a “robust maltiness and spiciness that is counterbalanced by an assertive crisp hop finish.” 8% ABV. This beer also reminds us of our pal Marc from Quebec, who we wish was here to enjoy the fest with us. Cheers, Marc! 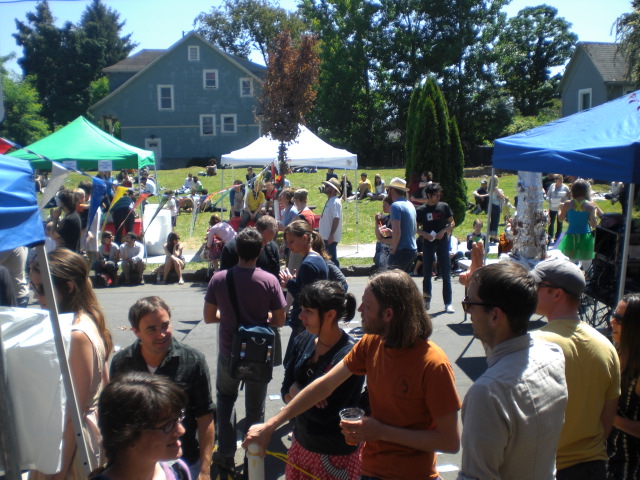 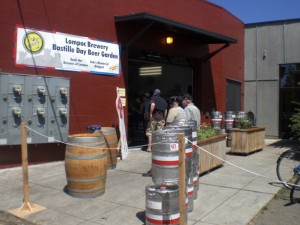 Funny how life is filled with random adventures. This is no different in the world of craft beer. On Saturday while walking around North Portland passing out a few fliers for our upcoming BrewPubliCrawl, we noticed a van pass us by driven by New Old Lompoc owner and Bald Guy Brigade frontman Jerry Fechter. “Follow me to beer!” he yelled to us, then trumpeted to us with a vuvuzela. We obliged and found ourselves amidst the festivities of Lompoc and Pix Patisseries Bastille Day Block Party. A live band was playing to an audience of wildly adorned party-goers. It was a hopping scene with the sun shining down on a perfect July day. Our first inclination was to prospect the beer garden by the brewery where we enjoyed a newly released summer Lompeizer and Son of C-Note. We were happy to see brewers Dave Fleming, Sam Orlansky, Bryan Keilty, and Zach Beckwith all in attendance as well as Oregon Brewers Festival organizer Chris Crabb. The highlight of the party for us was poking our faces through a wooden cutout of Fechter while the rest of us watch in amusement. 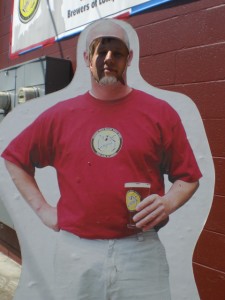 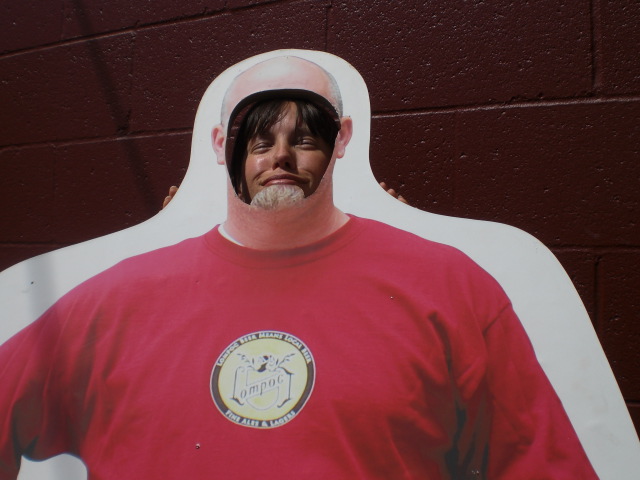 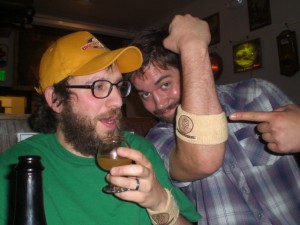 Five days of Imperial IPAs is a true test of will…and a whole hell of a lot of fun. Saraveza’s bonanza of boisterously bittered beasts was just that. Thanks to the hard work and planning of the bar staff, lead by Jonathan Carmean, Northwest Brewing News’ 2009 bartender of the year, IIPA Fest offered a wide range of such beers from what some might inaccurately perceive as a one dimensional style. Beers like Mikkeller’s I Beat YoU of Norway, 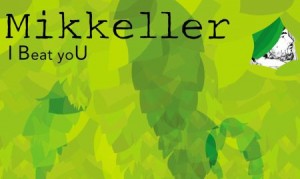 brewed at BrewDog in Scotland, exhibited a big malty, chewiness, much like Southern Tier‘s ginormous Unearthly and Oaked Unearthly. Others such as Double Mountain’s Molten Lava and Alameda’s Yellow Wolf were far lighter bodied, though the hop character of these beers was equally as bodacious. In total, more than 30 IIPAs exhibited the diversity that this style can offer, while bringing forth a range of interpretations within the art form of brewing. IIPA Fest was a big success thanks to everyone who participated. 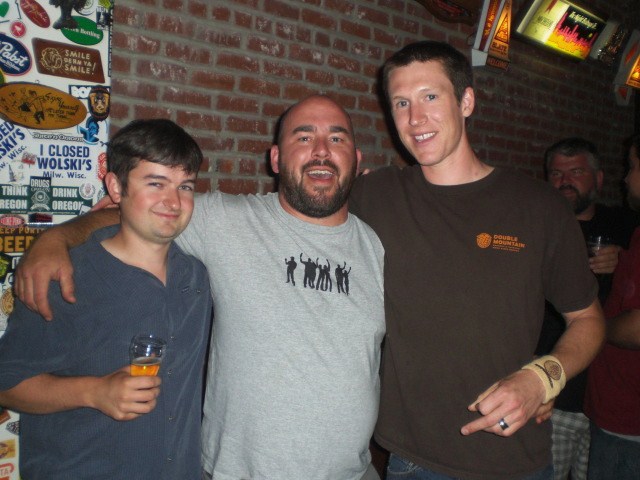