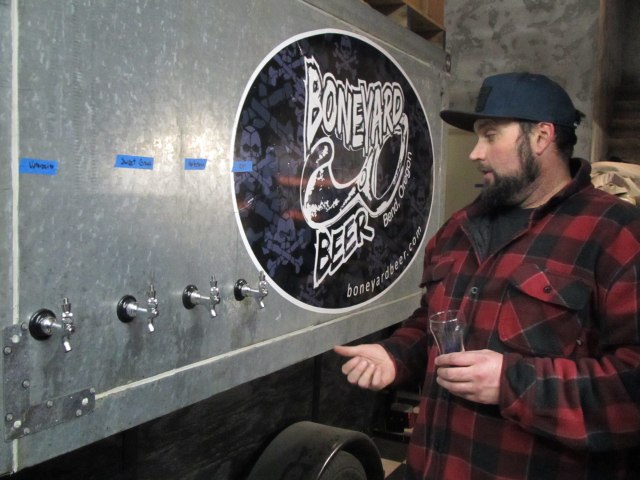 The weekend before last we found ourselves in Oregon’s largest town east of the Cascades. Here in Bend, we discovered a breadth of exceptional breweries. And, for a city with the same population as Asheville, North Carolina, which has been dubbed “Beer City USA”, Bend has more breweries. In the coming months, at least a handful of new breweries will emerge in Bend pushing it up to around 15 within the city.

In our last post about our most recent excursions in Bend, we mentioned the new on the scene GoodLife Brewing Co., which has been breaking ground into their 22,ooo square foot warehouse with some promising flavors, as well as the bursting at the seems Deschutes Brewery, which is at the top of Oregon’s players when it comes to artisan beer production. 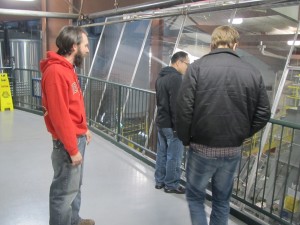 During our trip here, the Deschutes marketing department put us in contact with brand ambassador and tour manager Aaron Calihan. To say that Calihan was an amazing tour guide would be a massive understatement. An individual with an uncanny passion for his job, he granted us a stellar 90 minute personal tour of the growing Deschutes production facility on the south side of town. We started off in the soon to be expanded gift shop and were lead through the many tiers of the great brewery’s workings. A state of the art bottling and kegging line, quality assurance and sensory labs, magnificent brewhouse, and gigantic packaging  and storage facilities replete with a vast cooperage of inoculated barrel-aged treats were all highlights of Calihan’s comprehensive tour.Perhaps the most rewarding portion of this lengthy and engaging tour was a step into a sampling “shifties” station disguised as a water closet where a bunch of fresh beers were made available. It was made evident that Deschutes is good to their employees and the folks here really enjoy their jobs. 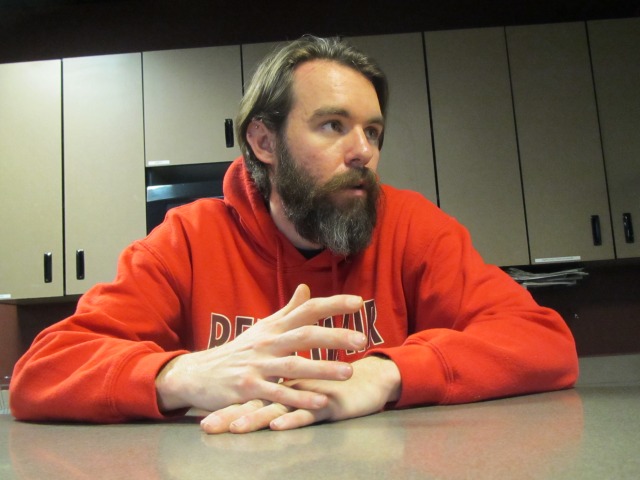 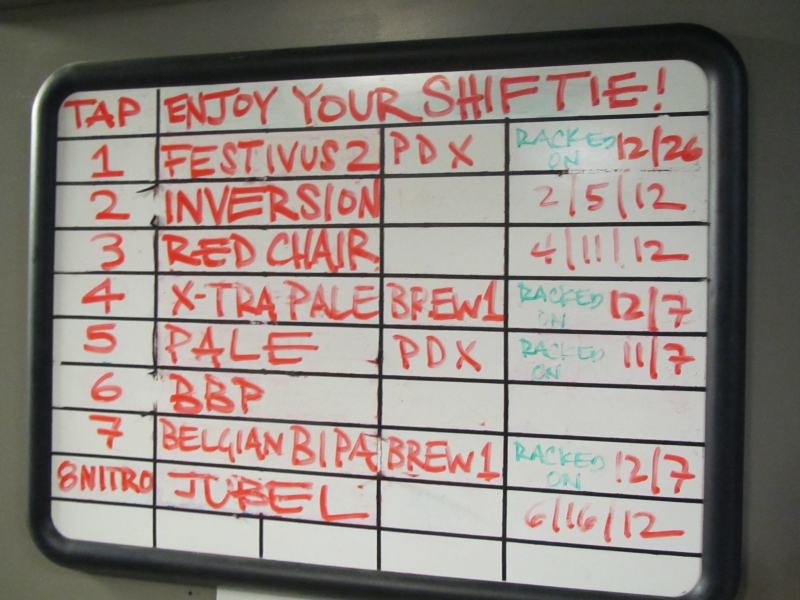 Following this life changing experience, we were kindly invited to join some staffers and friends at the newly remodeled Deschutes Pub on Bond Street in downtown Bend. An astonishing $1.5M renovation added the adjacent two story building that was recently erected making the once cozy little pub an open and welcoming arena with a capacity similar to that of the brewery’s Pearl District brewpub in downtown Portland. 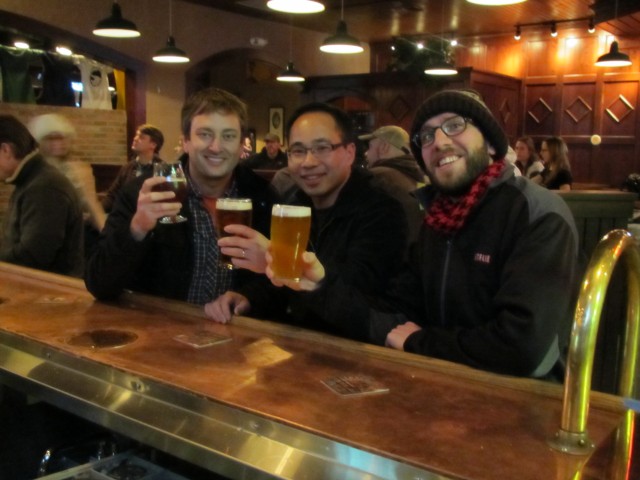 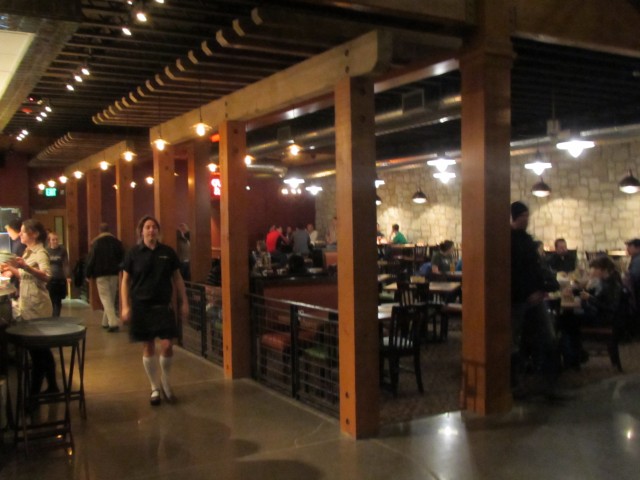 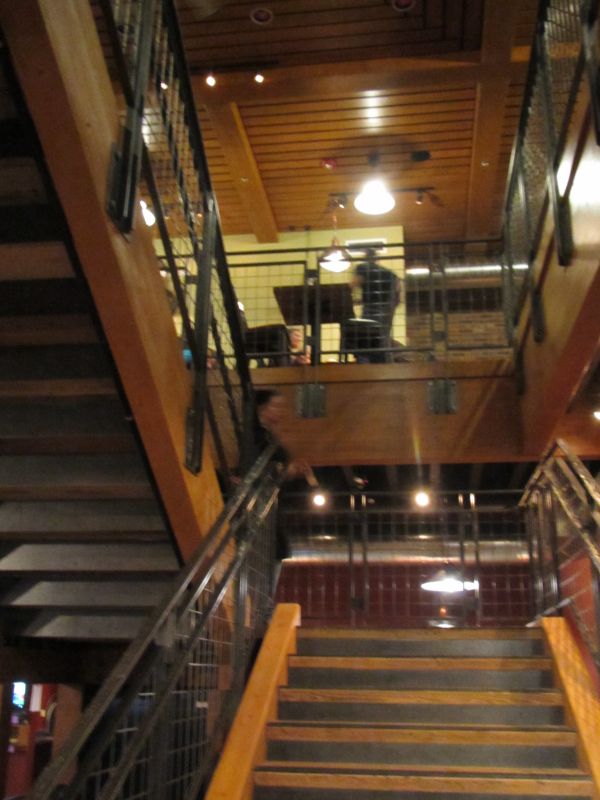 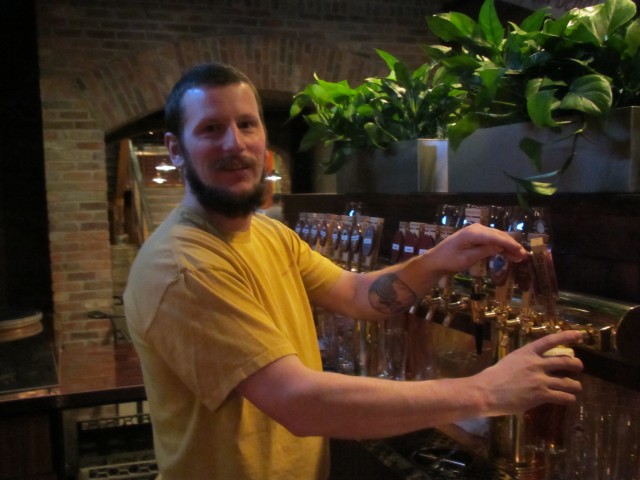 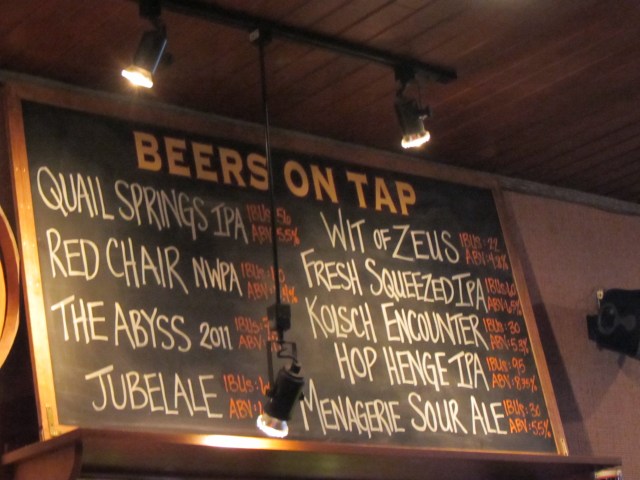 After a delicious dinner and a couple of tasty pints at the new Deschutes pub, we moved on to hit up a few more of the Bend’s best craft beer destinations. We were only in town for 24 hours, so we had to make each minute count. That being said, we could have lost ourselves in the seemingly endless wonders and allure of the magnificent Deschutes Brewery.

A sanctuary for beer lovers with an affinity towards heartily hopped ales is Boneyard Beer of Bend. With Pale Ales of just about every magnitude from their sessionable Bone-a-fied up through their RPM IPA, Hop Venom IIPA, and their ginormously hopped up Notorious IIIPA, boneyard doesn’t play it safe when it comes to big and bold flavors. Still, they’ve got a few lighter options such as their Girl Beer Cherry Wheat and their Black 13 light grainy dark ale. 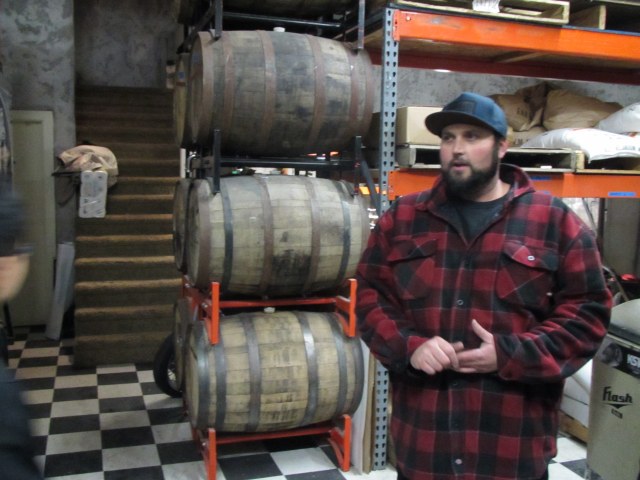 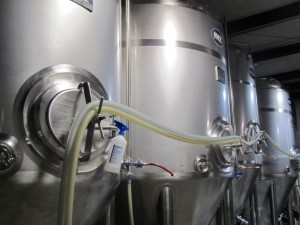 Co-founder Clay Storey generously provided us with a private after hours tour of their brewery and tasting room where some more than interesting mainstays and one-offs beckoned. Soon to break ground on a larger 50-barrel production facility on the north side of Bend, for now, the 10-barrel brewhouse with tasting room can barely keep up with demand. A taste of the fermenting Hop Venom off the brite tanks was a clear indicator as to why this is so. Also sampled was a wild/sour fermented rendition of the Black 13 aged in bourbon casks. Another powerful and flavorsome specialty that Storey pulled for us was the highly sought after Suge Knight, an boozy (14% ABV) imperial stout, also beefed up on bourbon. Storey says the brewery is tinkering with a number of other sour ales as well as new hop varietals and recipes in order to unfold interesting and novel flavor compounds. You just gotta love the Boneyard! 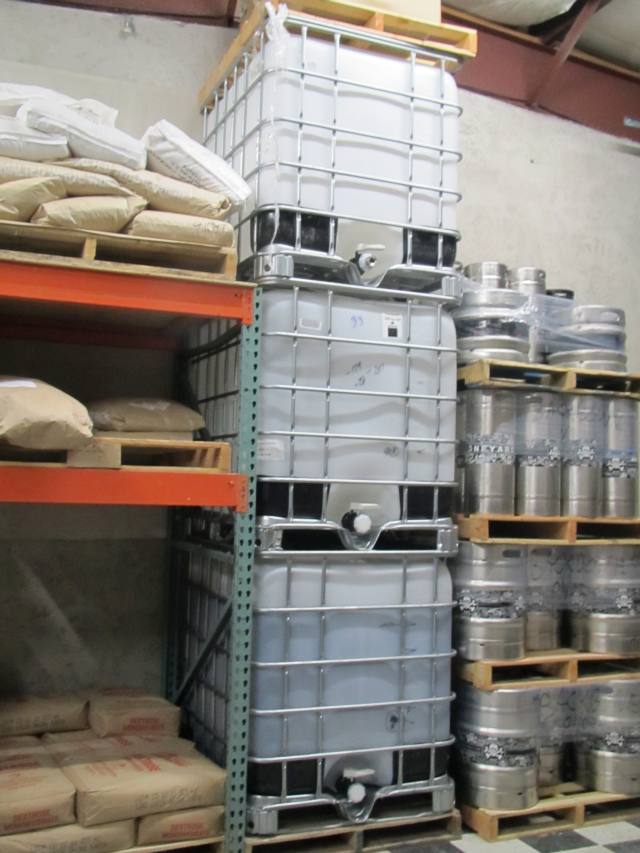 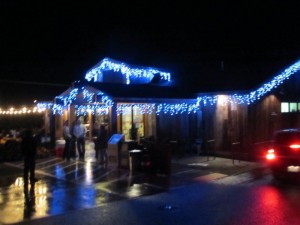 Absolutely near the top of our list of to dos here in Bend was to explore 10 Barrel Brewing Co. Since our last stop in Bend nearly four years ago, this brewery was just an iota of what it is today. With a massive expansion underway on the north side of town not far from their first production facility, many new beers are beginning to come to light under brewmaster Jimmy Seifrit. Seifrit, a former Deschutes brewer has been working diligently to develop and dial in recipes for 10 Barrel. With the new expansion and the addition of two of Oregon’s most recognized brewing talents, Tonya Cornett, former brewmaster of Bend Brewing, and Shawn Kelso, brewmaster of Barley Brown’s in Baker City, there’s a lot of expectations and promise now riding on the brewery. Co-founder Chris Cox tells us “We couldn’t be happier to have this staff in place. Each one of them brings a element that is unique and we are very excited for our future.” What’s not to like? In basketball terms, it’s like the Big Three – Paul Pierce, Kevin Garnett, and Ray Allen, or Dwyane Wade, LeBron James, and Chris Bosh. 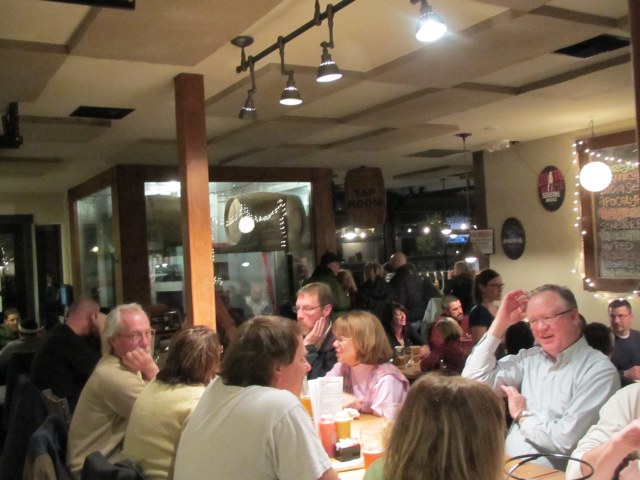 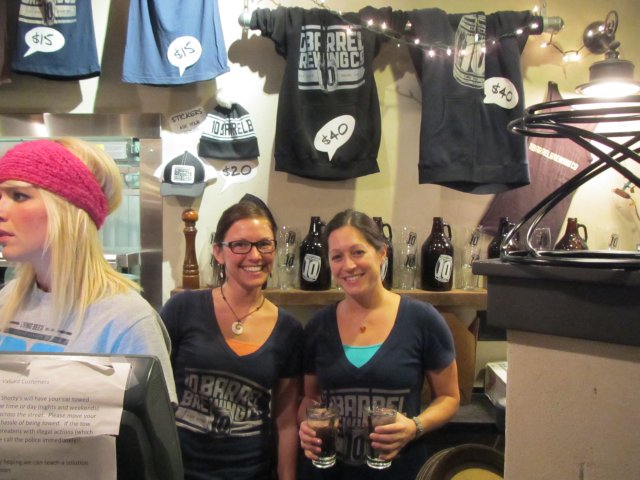 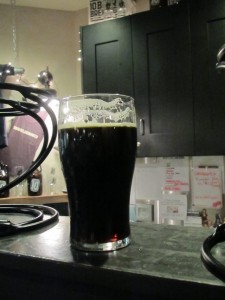 On Saturday we would head over to the new production facility, still under construction, but on this Friday evening, we were going to play it cool and delve into some cold ones at 10 Barrel’s restaurant and pub on Bend’s south side. Here we found many tasty offering such as the trustworthy Sinister Black Ale, the bitter and floral Apocalypse IPA, and the seasonally available Pray for Snow winter warmer. 10 Barrel really knows how to have a good time and treat their customers right. This is evident in the packed house that was on hand this night. 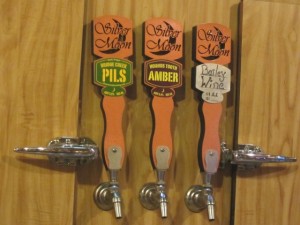 After a spell at 10 Barrel’s pub, we had one more destination on the docket for our Friday evening – Silver Moon Brewing. What began a decade or so ago as Tyler Reichert brewing supply shop with a few taps, has evolved into a nationally recognized brewpub. In 2011, Silver Moon won a gold medal for their Dark Side Stout and a bronze for their legacy lager at the Great American Beer Fest in Denver. Owner Tyler Reichert has done a great job in assembling a talented lineup of individuals (such as head brewer Tyler West and brewer Brett Thomas) to not only provide top notch beer, but also tasty food and great live music. Here at Silver Moon, we couldn’t help but opt for the award winning Bridge Creek Pilsner, a distinctly crisp lager that took home a bronze medal at the 2010 GABF. A perfect way to finish our night. 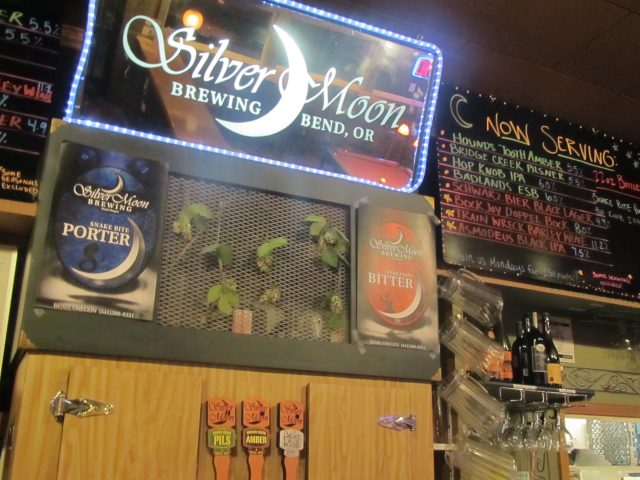