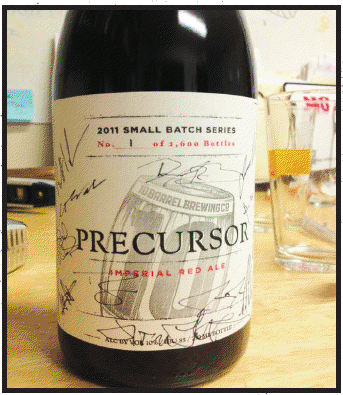 Bend, Oregon’s 10 Barrel Brewing is quickly winning over the hearts and palates of Northwest beer lovers. Not only do they have an all-star cast of beer makers including former Deschutes brewer Jimmy Seifrit, they are also growing at a rapid rate to increase capacity through an ongoing expansion effort that will bump them up to a 50-barrel brewery replete with barrel-aging abilities. In early 2012, 10 Barrel will take on Bend Brewing’s highly respected brewmaster Tonya Cornett to join the team, and not long after, you can count on another high profile Oregon brewer that we are not at liberty to disclose at this juncture.

As part of 10 Barrel’s ongoing expansion, the brewery has introduced a new lineup of Small Batch Series brews with the bigtime beer geek in mind. The first from SBS will be “Precursor”, an imperial red ale houses in a tidy corked and caged 750 ml bottle. Here’s the description from 10 Barrel on this new alluring brew:

Precursor is a harbinger of things to come. This Imperial Red is a multi-dimensional creation of malt, hops and barrel aging playing off each other. The finished complexity is enhanced by eight months of aging in bourbon barrels. Notes of grapefruit, bitter orange, dark caramel, and toasted bread purvey through this beer. Close your eyes, open your mouth, and let yourself wander.