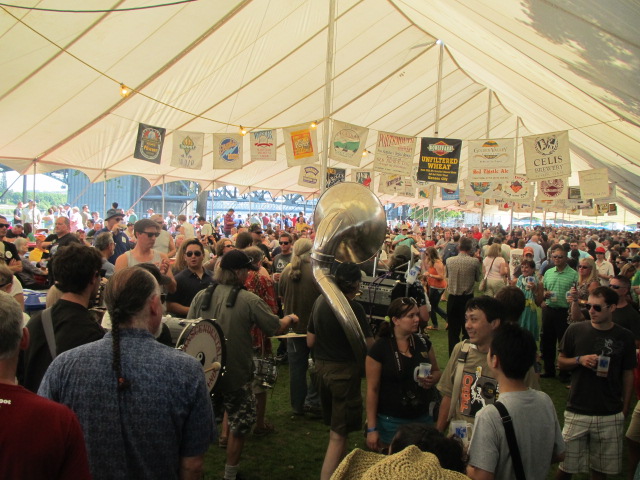 They came, they saw, they drank: 80,000 people traveled from all parts of the world to celebrate the 25thconsecutive Oregon Brewers Festival.  The four-day event took place July 26th through July 29th at Tom McCall Waterfront Park in downtown Portland.

The four-day affair kicked off on July 26th with a mile-long parade of 800 brewers and beer lovers through the streets of SE Portland and across the Morrison Bridge. The group was led by PDX Pedicabs chauffeuring event VIPs, including Grand Marshal Tom Dalldorf, publisher of Celebrator Beer News, and four of the original festival founders: Art Larrance, Kurt Widmer and Dick and Nancy Ponzi. Members of the Transcendental Brass Band and a contingent of Cascade brewers pushing the official wooden keg followed, tailed by a hundreds of beer lovers and many costumed brewers, including Rogue monks and McMenamins Hammerheads. Once onsite, Dalldorf swung a wooden mallet and drove a brass tap into the official keg, heralding the start of the festivities as beer flowed for all.
In the two main beer tents, the OBF served 84 different craft beers, including two gluten free beers, from 14 states across the country. An additional 40 some beers were tapped in the Buzz and Sour Tent, which offered tastes of rare and specialty beers from the participating brewers, and ran out by the close of Saturday night due to an overwhelming demand. 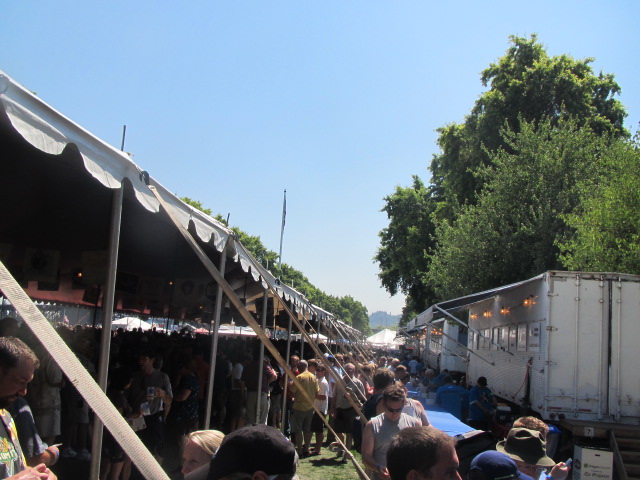 The top five most popular beers had one thing in common: Fruit! Vertigo’s Tropical Blonde, 10 Barrel’s Raspberry Crush, Redhook’s Peach Trippel, Old Market Pub’s Cherried Alive and Cascade Brewing’s Razberry Wheat were top sellers. This year’s festival featured no fewer than ten beers made with an assortment of fruits, including key limes, cherries, raspberries, pomegranate, strawberries, peaches, plums and blueberries.
The festival grows in popularity every year, and beer lovers came from every state in the nation, and many countries around the world, to join in the celebration.  In addition to beer tasting, there was live music all four days, food from six area restaurants, homebrewers brewing beer on site, and a collection of beer-related vendors, ranging from hand carved wooden steins to glass blown pints to kilts.
Minors and designated drivers received complimentary cups of handcrafted root beer and free face painting in the Crater Lake Root Beer Garden. Staff from Everyday Prevention provided education on the potential dangers, risks, and unhealthy community norms associated with underage drinking in the same area.
More than 1,800 bikes were parked in the New Belgium bike corral, manned by volunteers for Transportation Solutions ByCycle. The festival employed more than 2,000 volunteers to pour beer, sell tokens, and aid with recycling education; plastic mugs from this and past year’s festivals were collected at exits to be recycled.
The Oregon Brewers Festival was founded in 1988 as an opportunity to expose the public to microbrews at a time when the craft brewing industry was just getting off the ground. Today, that industry has succeeded, especially in Oregon, where 116 brewing companies operate 150 brewing facilities in 58 cities in Oregon. There are 51 breweries operating within the Portland city limits, more than any other city in the world; the Portland metro area is the largest craft brewing market in the nation with the most number of breweries at 64, according to the Oregon Brewers Guild. A recent survey of OBF attendees shows that the Oregon Brewers Festival annually generates an economic impact of more than $23.2 million for the local economy. 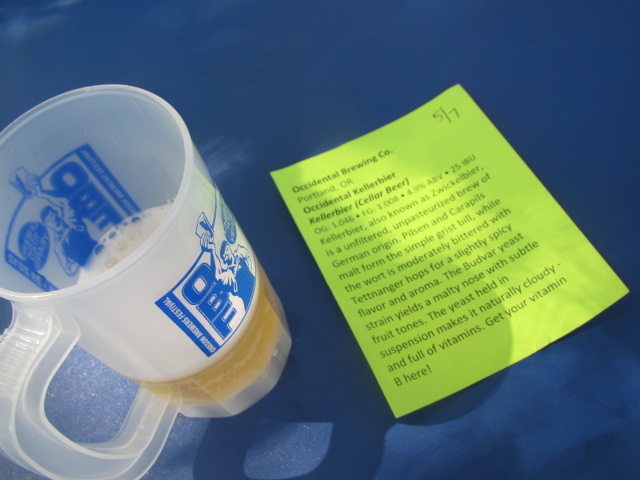