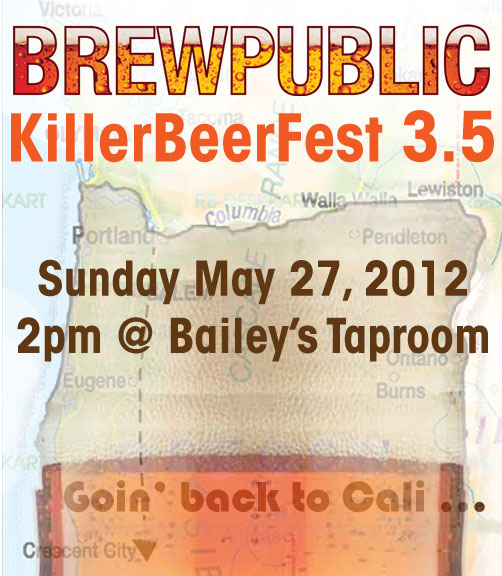 Brewpublic presents KillerBeerFest 3.5, happening at Bailey’s Taproom on Sunday May 27, 2012 from 2-10PM. This event marks one of our last events in Portland for a while. We’re sure gonna miss y’all, so we’ve lined up more than 20 exceptional one-offs and specially designed brews from around the region to celebrate. $5 entry get you a commemorative KBF glass. We’re sure that if you’re a beer geek, there will be at least a few to your liking. Check out the lineup below:

Pelican/Ninkasi Collaboration Imperial Oatmeal Belgian Stout: Darron Welch, Co-Owner/Brewmaster at Pelican Pub & Brewery, recently joined forces with Jamie Floyd, Owner/Brewmaster of Ninkasi Brewing Company to collaborate on a brew in memorial of Danny Williams, who recently passed away. This is one in a series of Danny Williams memorial brews that are being brewed across the country, with the Pelican/Ninkasi collaboration representing the Pacific Northwest. This one is a fusion of the signature stouts produced by each brewery, Pelican’s Tsunami Stout and Ninkasi’s Oatis Stout. After marrying the two formulations, the beer was boosted to Imperial strength and then fermented with Rochefort Trappist yeast, yielding a unique, inspired beer, an Imperial Oatmeal Belgian-Style Stout! 10.5% ABV.

Breakside Belgian Bitter aka Wenchie’s Creamy Session: A tribute beer for our good friend Angelo DeIeso, who is leaving Portland for the fairer pastures of California. To celebrate his contributions to the Portland beer community, his friends came together to brew a cold-fermented, single hop (German Opal), blonde ale made with a Belgian yeast strain. Like Angelo, the beer can’t be summed up as a simple ‘style.’ Bon voyage to you Angelo–come back and visit often! 5% ABV, 37 IBU.

Natian Organic La Luz Summer Ale: Brewed by our buddies at Natian, the real flavor comes from the Lemon Myrtle, Lemon Balm, Elderflower and Grains of Paradise. The Lemon Balm and Lemon Myrtle are used in conjunction. Neither are added in an amount to give it an overpowering lemon presence, but enough to bring some lemon flavor without overwhelming the palette. The elderflower provides a mild tart/bitter character and the Grains of Paradise, an aromatic peppercorn, is added in low enough quantities to bring depth to the elderflower without leaving a spicy or astringent aftertaste.

Ninkasi Babylon Double IPA: Marris Otter malt from the UK was used along with Biscuit malt to create a rich and nutty backbone to this super hoppy beer. The hop aroma begins with intense earthiness from the prolific use of English- Style Fuggle hops. There is a depth that includes apricots, peaches, and a hint of mango, a fruity hop character to balance the copious malts. This is carried on to the palate with a smooth, creamy mouthfeel from the flaked barley, making for a very flavorful and very enjoyable beer. 9.1% ABV, 100+ IBU.

The Commons Killer-Weiss:  From Tart, light and refreshing 4.6% ABV wheat beer in the vein a Berliner-Weiss. Soured with lactobacillus and fermented with Brettanomyces Lambicus. This beer tastes just Wright!

Gigantic Rauchweizen and the Bandit: From one of Portland’s most touted new brewery’s comes this smoked hefeweizen brewed with lots of Love and sure to raise some Havig.

Logsdon French Oak Barrel-aged Seizoen Bretta: Special Brettanomyces yeast provides added dryness and crisp complexity to the Seizoen Bretta, an unfiltered saison, balanced with whole hops and a soft malt character. This version is oak barrel-aged for added woody, creamy complexity. Thanks to the organic farmers at Logsdon of Hood River, OR for sharing!

Rock Bottom Mai Weiner: You know you want Mai Weiner in your mouth, so here it is. This Portland version of a Vienna lager was brewed with 830 Lager Strain yeast 5.4% ABV. A wonderful light caramel flavor with Vienna malt and Carafa for added color depth. Nice and crisp. Word up!

GoodLife Comatose IIPA: Weighing in at 9.5% and measuring 95 IBUS, Comatose is a triple dry hopped, Imperial IPA. This heavyweight has over 5 lbs. of hop per barrel, which makes the aroma smell of strong orange candy followed by citrus and spice. The beer continues jabbing the taste buds with a taste of biting into a fresh grapefruit with a balanced malt character that finishes strong and clean. Ding, ding, ding… TKO!

Widmer Smoke on the Lager: Created with James Beard Award-nominee chef Bill Taibe, this twist on a Helles lager uses Briess Smoked Wheat for a rounded mouthfeel and a touch of smoked malt flavor. The beer has a hint of hop flavor, but the bitterness is balanced out nicely by the malt character. Finishes clean. ABV: 5.0%, IBU: 22

Hopworks Bourbon De Ieso Spades IIPA (firkin): From deep in the wood cellar of Portland’s eco brewpub comes this bourbon barrel-aged rendition of HUB’s 2009 GABF gold medal winning Imperial IPA known as Ace of Spades. Named in honor of rock n’ roll icon Lemmy Kilmister and his band Motörhead’s popular song and album, De Ieso Spades prominently features Amarillo, Cascade and Centennial hops, added at every point of the brewing process: mash tun, first wort, kettle, and dry hop. All of the hoppy green goodness results in a beer with a huge citrus hop aroma, flavor and deep, clean bitterness. Add bold bourbon notes and you’ve got one hell of a treat! 10% ABV, 100+ IBU.Upright Barrel-aged Five: Barrel aged Five is a blend of two casks that formerly housed the Fantasia, Upright’s lambic-esque fresh peach beer. The Five was put in on top of the spent peaches when the Fantasia was pulled, and the fruit still had enough left to lend the beer a nice nose complete with some funky character from the wild yeasts and bacteria. The beer is quite hoppy and makes for an interesting mix of flavors between all its components and processing. 5.75%

Rogue Morimoto Imperial Pilsner: Bold yet, smooth 8.8% ABV strong lager with 100% French Pilsner Malt and 100% Sterling Hops and fermented with a Czech Pils yeast. One of the greatest beers ever brewed.

Elysian The DREAD Imperial Stout: The DREAD is an Imperial Stout brewed with pale, C77, chocolate, roasted barley, black and flaked rye malts with fifty lbs. of sugar. Bittered with Magnum and finished with Chinook hops, then conditioned on oak staves for a little over two months. OG 23.1P, 9.6% ABV 75 IBUs.

Vertigo Angeloak Oak-aged Dry-hopped IPA: In honor of our brother from another mother – Angelo De Ieso, II, Vertigo Brewing will be providing a special keg to Bailey’s Taproom for KillerBeerFest 3.5, a dry-hopped/oak aged version of our flagship Friar Mike’s IPA we call “Angeloak” IPA. We think this beer will live up to its namesake. Please save the date, Sunday May 27th and come out to wish Angelo farewell and good luck on his move to California.

Cascade Spiced Shrieking Violet: This NW style sour is no wall flower, it started as a strong spiced quad that was barrel aged for 21 months and then further aged on Blueberries for 6 months, then blended with a little spiced Apricot for a little kick before the huge herbal notes of dense blueberry on the nose lead to hints of oak and leather. Rich earthy notes of dark fruit on the palate give way to a rich velvety finish that dries out to a base note of blueberry skins. This is a special sendoff beer just for or good friend Angelo. Servus!