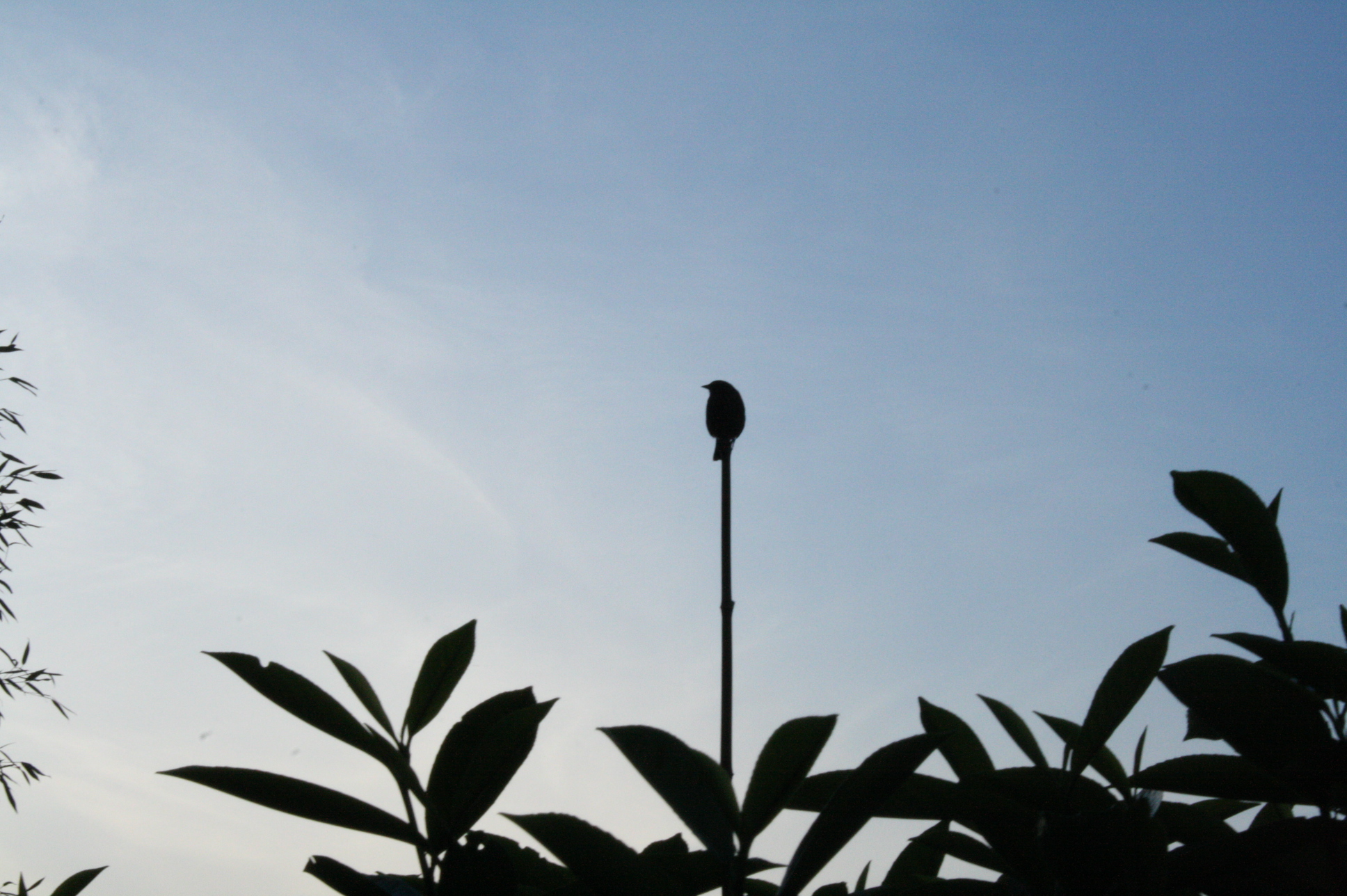 With the gorgeous weather we’ve been getting lately in the Pacific Northwest, the only regret about the weekend is that it didn’t last longer.

After work on Friday, we found ourselves at a favorite haunt in Bailey’s Taproom. Bustling with a variety of beerovore species ranging from the Quaffasauraus to the Canus Lupulus, the joint was teeming with thirsty folks both inside and out who know what’s good for ’em. A tall victorian pint filled with Laughing Buddha…er…Trade Route Brewing‘s Mango Weizen was a rewarding spritzily carbonic quencher. I recently enjoyed a bombastically bitter Infidel Lime IPA.  The Trade Route boys don’t do anything extreme, but they are quite inventive with their Southeast Asian-inspired beers of consistently nobel quality.

Following this Bailey’s pit stop, we dipped into BridgePort‘s NW Portland brewhouse for some grub and pub. Keeping it on the session front, a cool imperial fill of Blue Heron was just what I needed, as was an original IPA, to this day, still one of the finest American Indian Pale Ales out there. We are especially stoked to get our palates around the forthcoming release of their Stumptown Tart, this time with Oregon cherries, scheduled to hit in late June. A recent ale house newsletter from BridgePort said:

Using a Belgian Tripel base (think Fallen Friar), our brewers added 2,000 pounds of Oregon pie cherries grown at Fruit Hill Farms in Yamhill County. The juice is currently fermenting in the tanks, and will be ready for release on Thursday, June 25th. This spicy and fruity beer will have a tawny reddish color with cherry and almond flavors, and a slightly tart finish.

Before leaving the west side of town, I made sure to grab a couple cases of Pyramid/Macs brews. A case each of Curveball Blonde Ale (Kolsch-style ale), Summer Grifter IPA, and MacTarnahan’s Original Amber rounded out my NW session order for the night.

Back to the East side of the Willamette River, I had planned on showing up to snag some Upright Brewing beers at Belmont Station for a meet the brewer event with Alex Ganum and Gerritt Ill, both former employees of the bountiful beer market. However, I never made it to the event where the beers named Four, Five, Six, and Seven were on tap. I did manage to swing by Upright earlier in the week and try each of these beers as well as a version of the Four brewed with an incarnation of Walking Man‘s English yeast strain (Anglo Saison!). Damn these dudes are bomb brewers to say the least. According to Chris Ormand of Belmont Station, a new Raggae Junkie hop-free gruit ale that will be pouring at the North American Organic Brewers Festival. Chris says :

I don’t know if Alex and Gerritt want me to say anything about the gruit and ruin any potential surprises, so I’ll just say that I’m really looking forward to this one. I’m also happy to see the #7 on the list; the first batch should be ready soon and popping up around town at the usual suspects, but for folks attending the fest from out of town this is likely to be their first taste of Upright. If the weather gets toasty Alex may regret bringing this instead of the ridiculously quaffable #4, but I’m sure it’ll be a popular beer regardless. 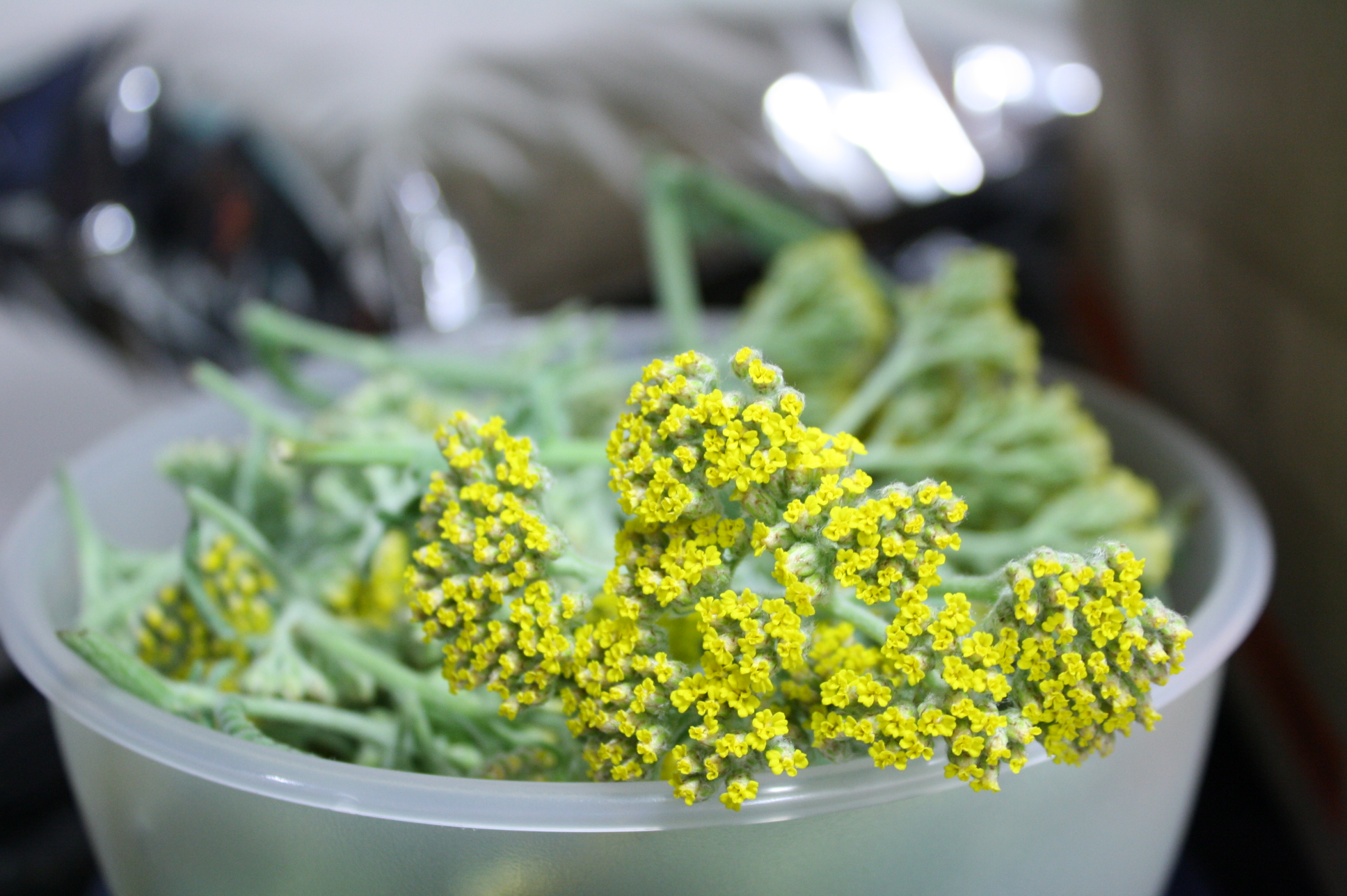 During my visit to Upright, Alex had some fresh yarrow and calendula on hand for a special batch of forthcoming brew. Yum! Friday night caught me sitting home and enjoying a growler of Seven Brides German-style Pilsner (aka Lil’s Pils) that I got from Jeff DiSantis on a recent trip to the heart of the Oregon hoplands in Silverton. Jeff hooked me up with some hops from his Mt. Angel company Hops 2 You that I will certainly employ in a homebrew soon. Look for an interview with Jeff coming up this week here in Brewpublic. 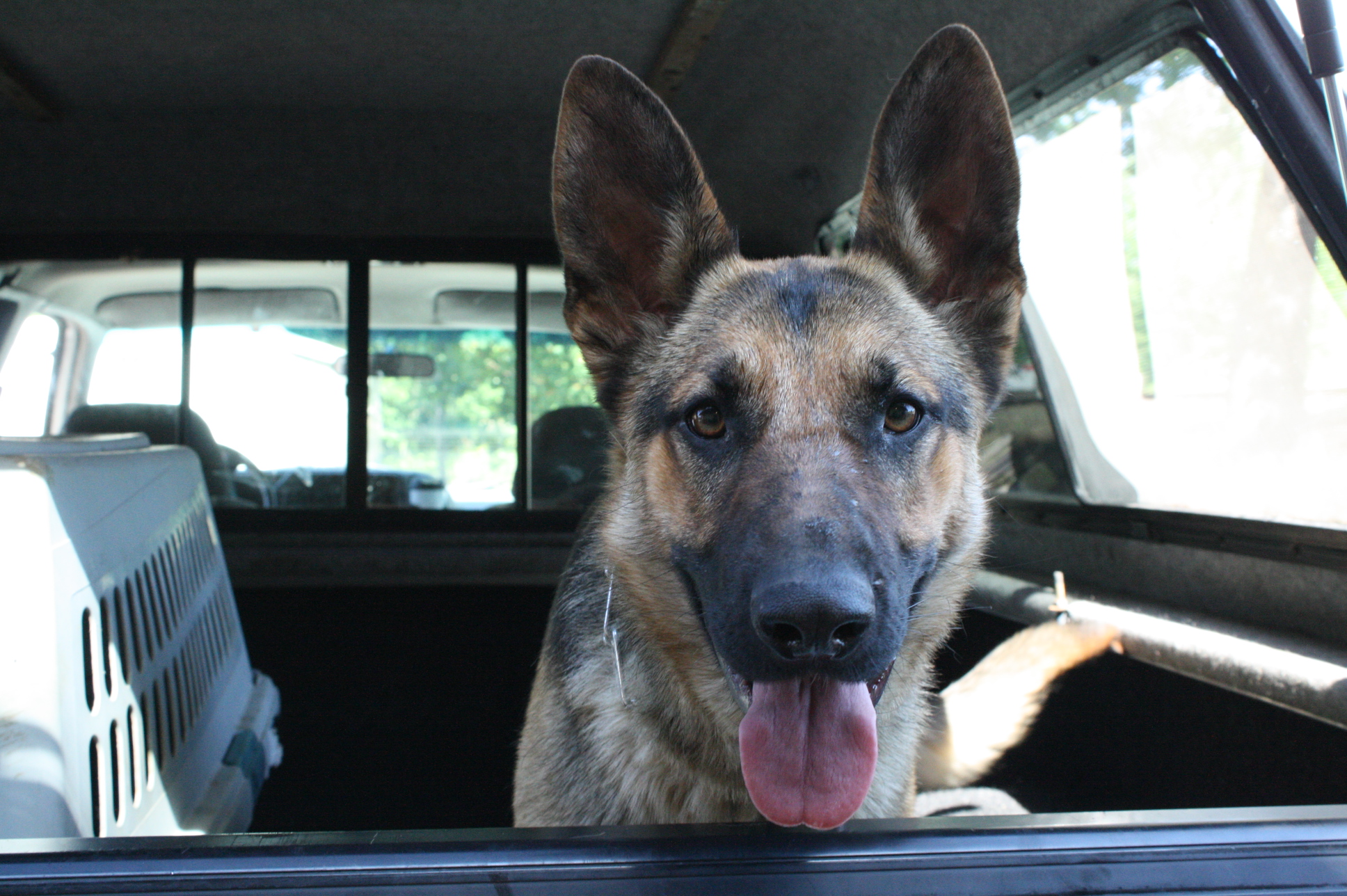 On Saturday, we scoped out Sushi Mazi, a tasty new sushi restaurant on SE Division Street where we enjoyed fresh rolls, Inari, edamame, seawead salad, and deliciously unfiltered, creamy sake. Being that I am not a sake geek like I am with beer, the name of the delicious libation totally escapes me as I type this. Making the most of

our local street, we popped by Bar Avignon, a wine bar next door with a handful of killer taps. At Avignon we enjoyed pints of Double Mountain Kolsch and North Coast Old Rasputin Imperial Stout on nitro tap.

Following Avignon, an obvious choice was Division Street’s best beer spot, Victory Bar. Here, it is no surprise to be surprised by some beer geek special. On this occasion, a Saison from Concord, California’s Black Diamond Brewery pleased me with a pounding spiciness of coriander. Hot diggity! 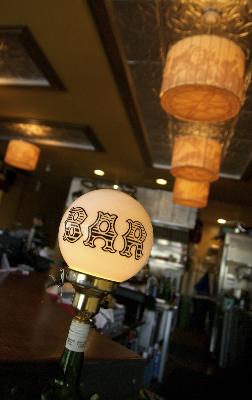 On Sunday, I rolled up to Washington State to grab some 750 ML bottles of Boulevard Brewing (Kansas City, MO)’s Smokestack Series brews at By the Bottle. This includes a Brett-Saison, Long Strange Tripel, and the Sixth Glass Quadrupel. Lately, on a wit kick, I was also pumped to find their Zon on the shelf. It’s always interesting to see what brews you can find across the river that aren’t currently sold in Oregon. 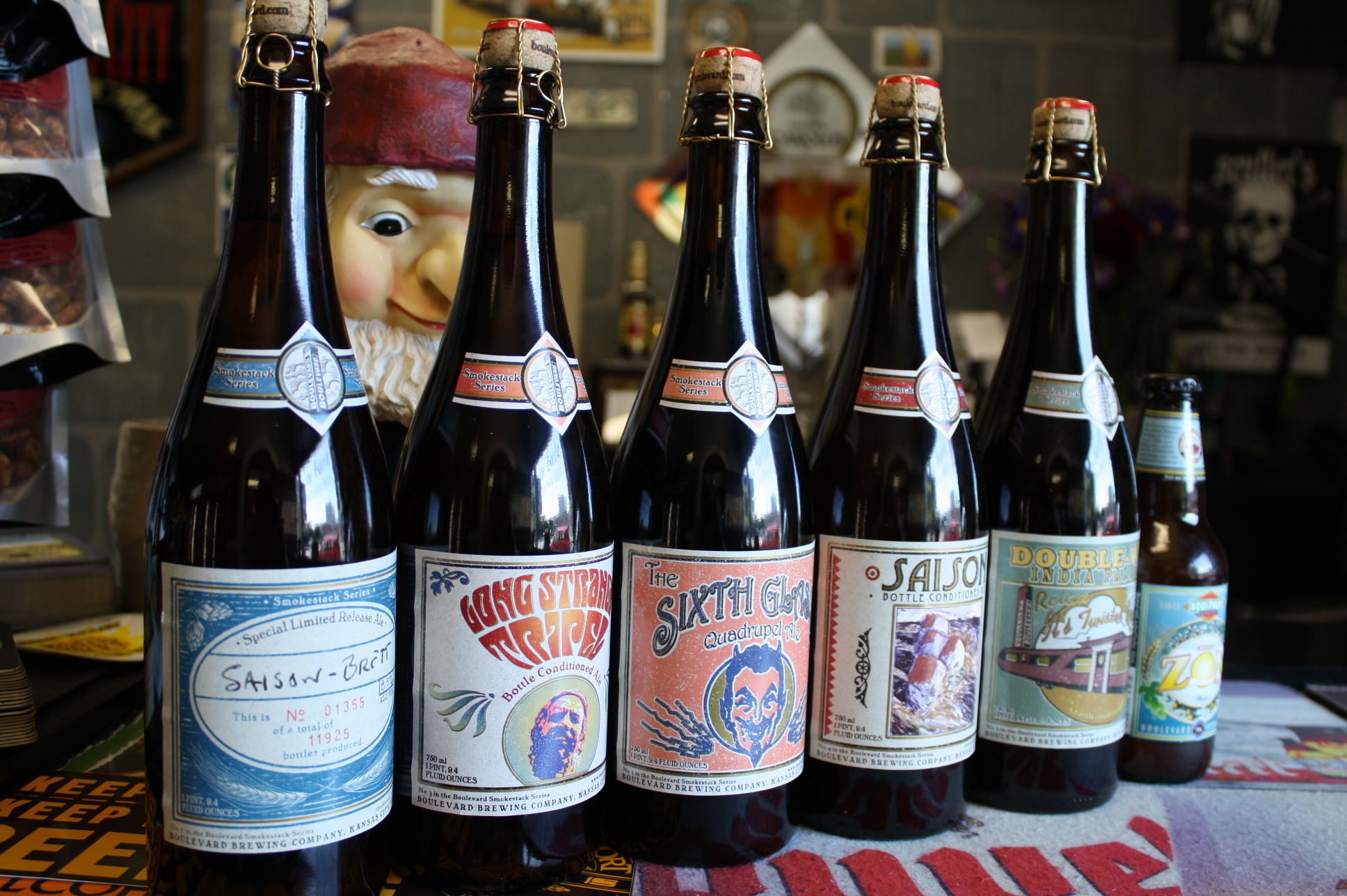 With weather like this, it’s hard to be in front of a keyboard. Time to get outside to the barbie with some cold ones. Our buddy El Gordo finished up the weekend with a Sunday night Belgian tasting that including sampling a variety of brews from a recent trip across the pond, some grubbin’ vegetarian eats, and porch settin’ with some decent people.  Peace! 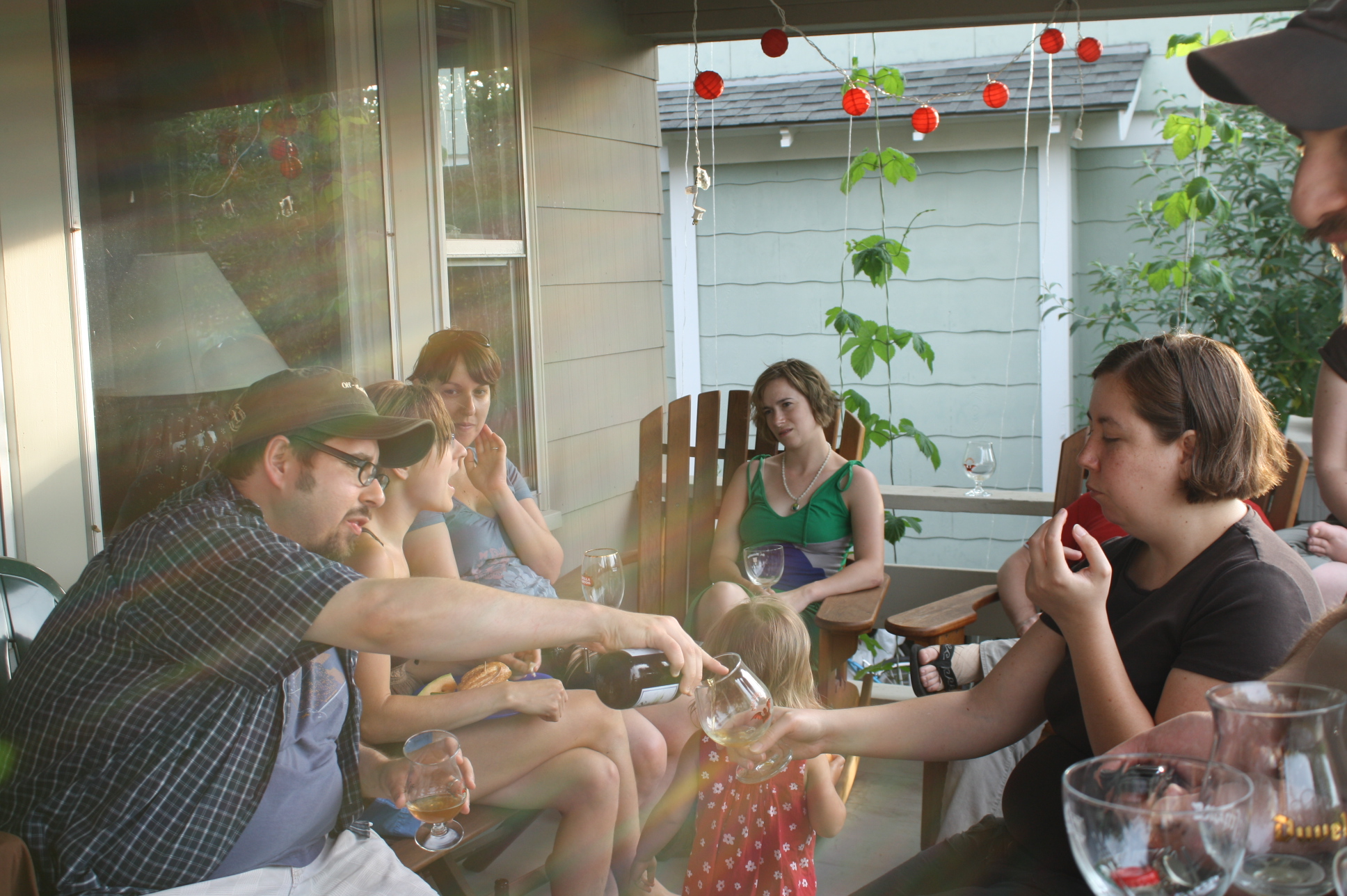 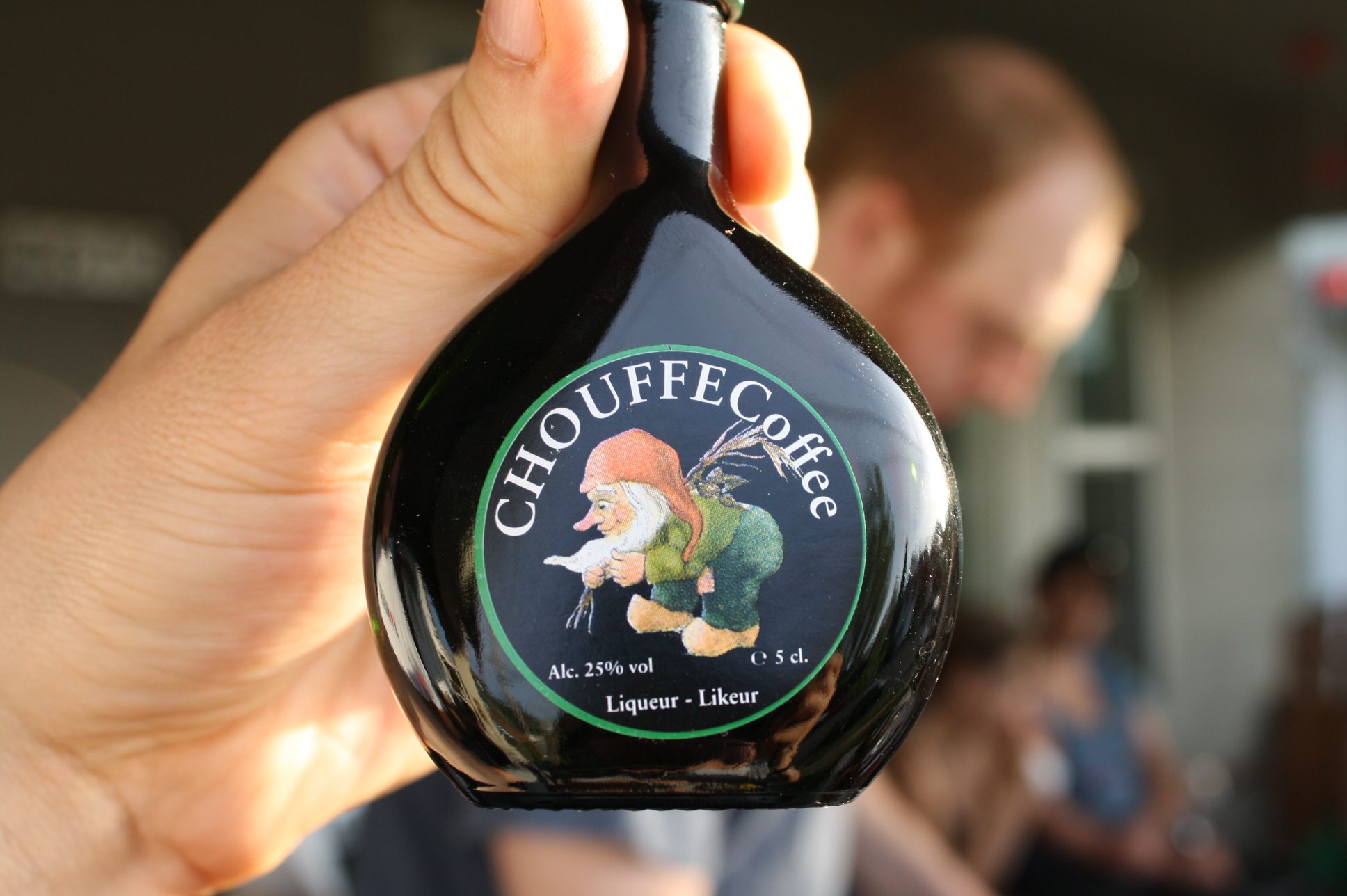 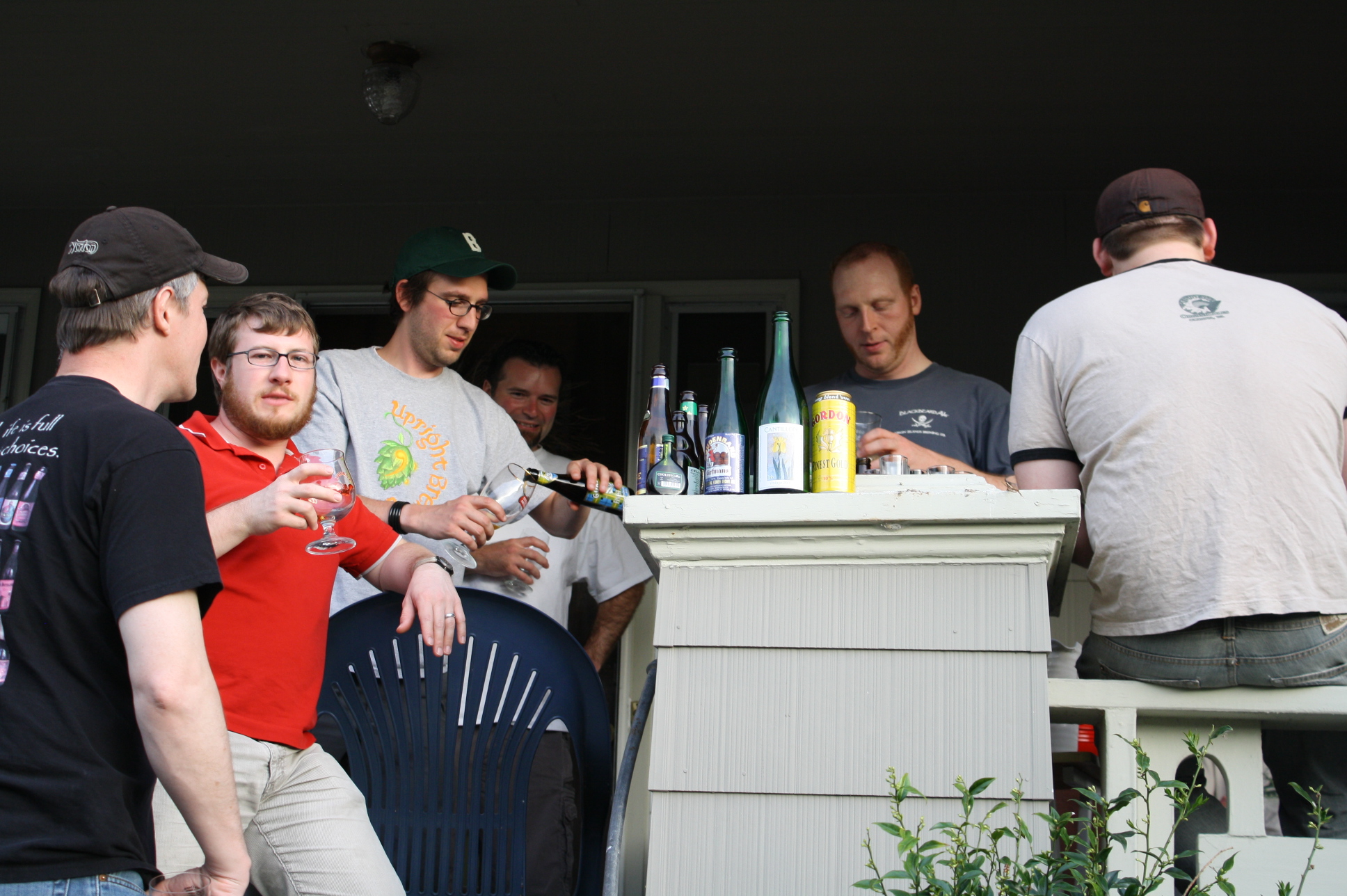 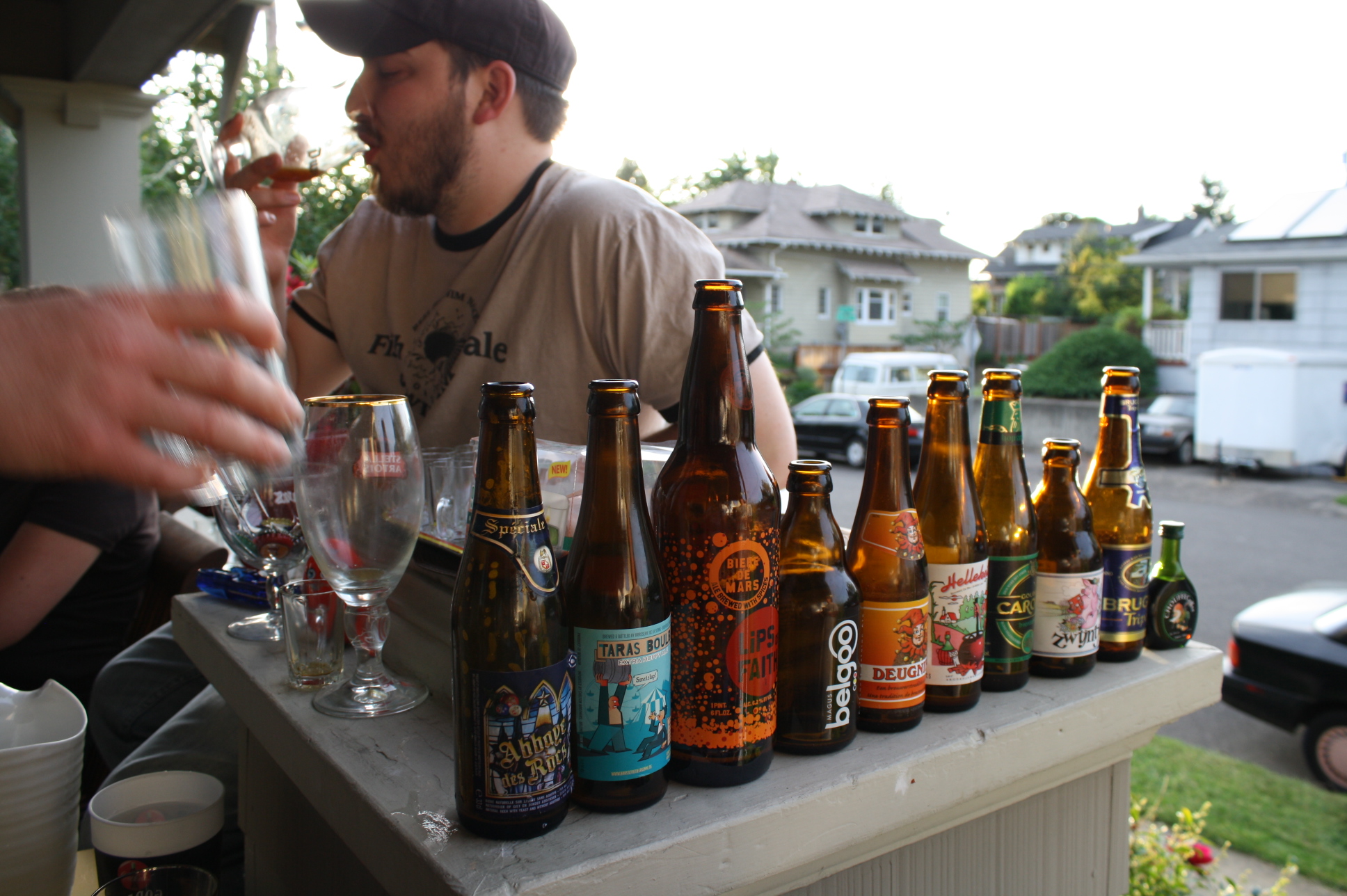 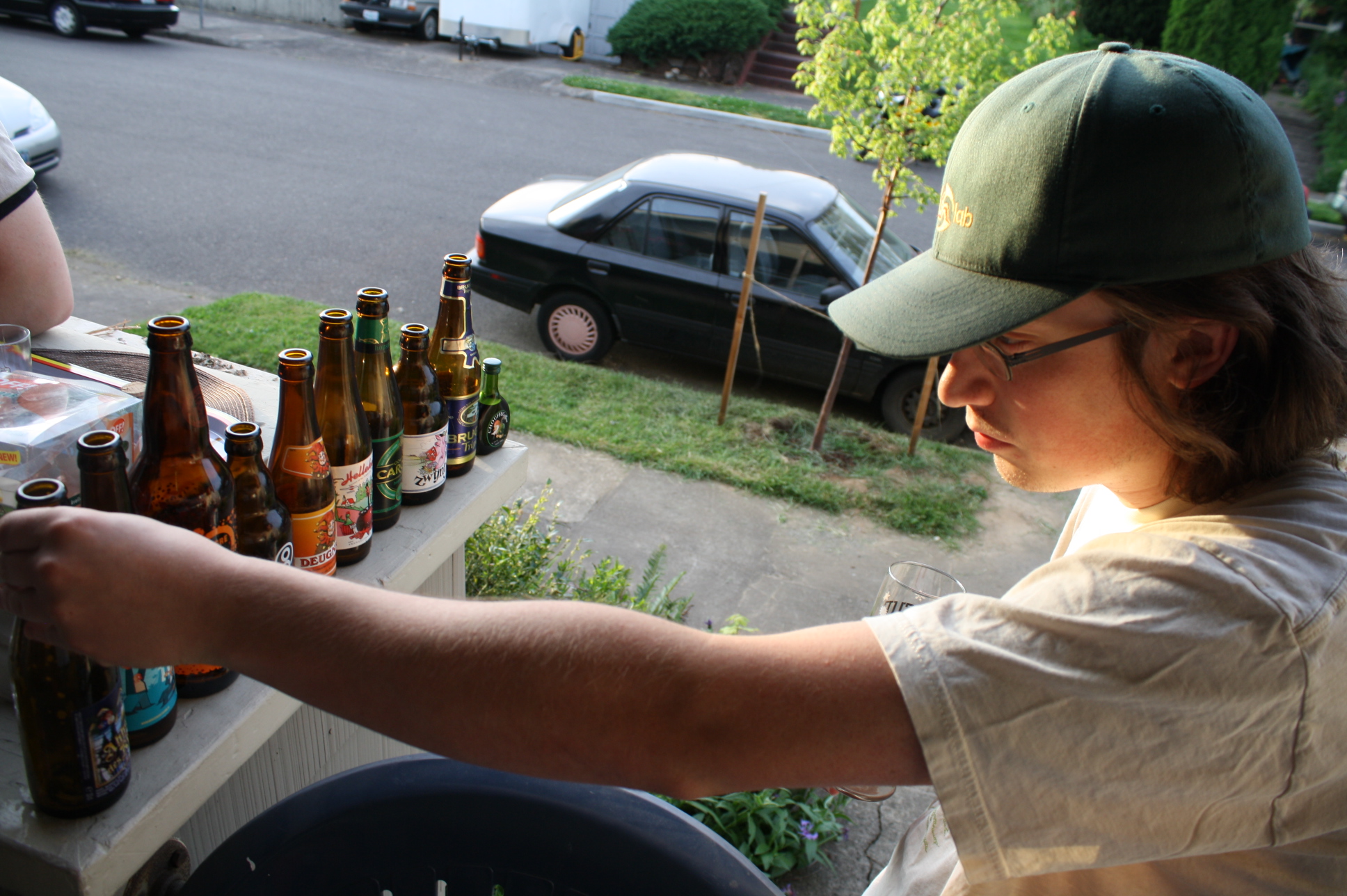 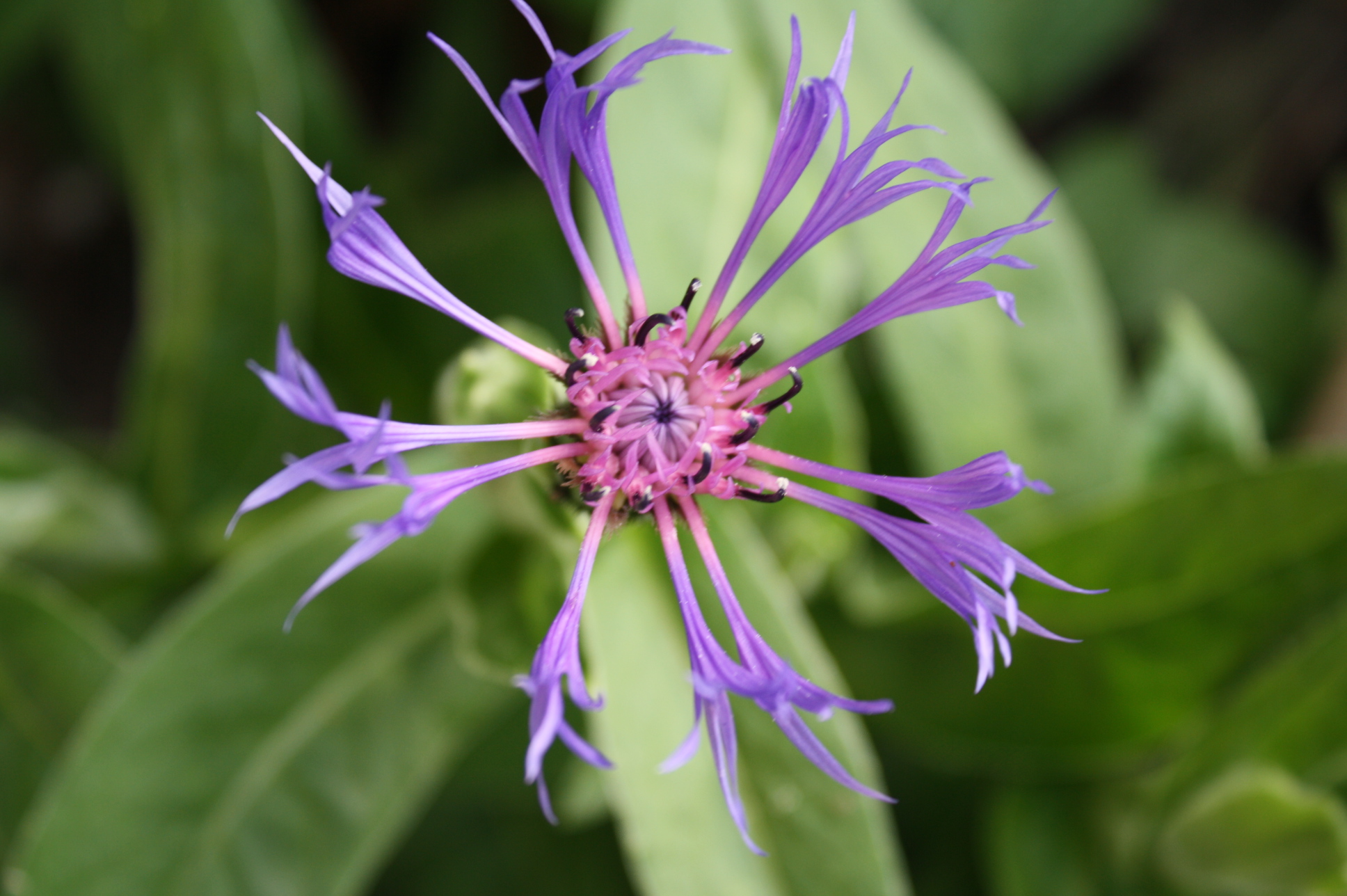