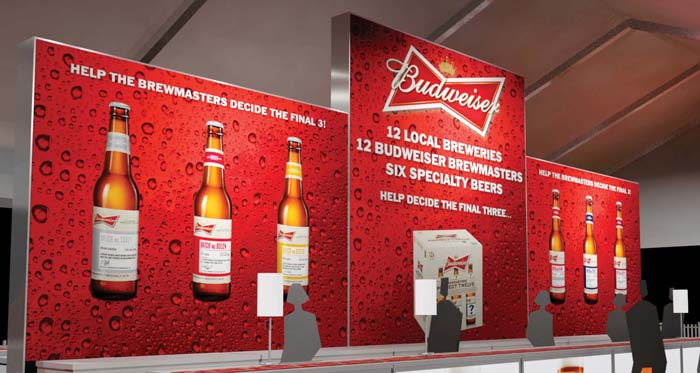 Here is a follow-up to a previous Anheuser-Busch press release that was posted on Brewpublic last month. Known as Project 12, the project is a work of 12 geographically dispersed A-B breweries to create a lager with the brewery’s proprietary yeast strain. The beers have been pared down to six from twelve brewers and this fall there will be three remaining that will be available to the general public. Budweiser is throwing a big party with music selected by Jay-Z to give folks the opportunity to give their feed back to 12 of Bud’s brewmasters. Here’s the full story sent as a press release from A-B:Brewmasters Who Created ‘ZIP Code’ Beers Share Experimental Brews with Festival-Goers

PHILADELPHIA (Aug. 31) – There will be world-class music at the two-day Budweiser Made in America festival this weekend in Philadelphia. There’ll also be world-class brewmasters – 12 to be exact.

Along with the eclectic roster of more than two dozen musical acts personally selected by JAY Z, Budweiser’s top U.S. brewmasters will gather in Philadelphia to sample festival-goers with six limited-edition Budweiser experimental  beers they collaborated on to create. Based on consumer feedback, three of these beers will be available later this year in a variety package.

The brewmasters represent all 12 of Budweiser’s geographically dispersed breweries and will be staffing a special “Project 12” section of the festival.

“These brewmasters are the best in the world,” said Rob McCarthy, vice president of Budweiser. “Like the music at the festival, they are world class. Budweiser is a difficult beer style to brew, so it takes a lot of expertise to ensure the quality and consistency that our beer drinkers expect. The brewmasters’ new ‘Project 12’ beers were inspired by Budweiser and have a range of colors and flavors, but all are refreshing beers with a relatively low bitterness and with Bud’s crisp and clean taste.”

Jane Killebrew-Galeski, director of brewing, quality and innovation for Anheuser-Busch, also will be on the scene gathering feedback from consumers about which beers they like best.

“We like all these beers, but we want to know what consumers think,” she said.  “We’re here to celebrate some of the best music America has to offer with some of America’s most talented brewmasters joining in on the fun.”

Earlier this year the brewmasters at Budweiser’s 12 geographically dispersed breweries worked together to create their own “tribute” beers to fit the Budweiser brand’s reputation for quality and consistency. The assignment pays homage to Budweiser’s “clean and crisp” taste by using the proprietary yeast directly descended from the original Budweiser yeast culture used by Adolphus Busch in 1876 and still used by Budweiser today.

Through internal tasting and analysis, the 12 small-batch beers – each a lager using all-natural ingredients – were pared to six to take part in a summer-long, nationwide sampling effort. Consumer feedback is now helping Budweiser narrow the six beers to three for inclusion in a limited-edition sampler pack, available for purchase this fall.

Each Budweiser tribute beer is distinguished by the ZIP code where the beer is brewed. Among the six beers being sampled at Budweiser Made in America and the brewmaster collaboration teams behind them:

“Budweiser Made in America” takes place over Labor Day weekend in Philadelphia. The two-day music festival benefits United Way and is the culmination of a summer-long series of music parties in cities all across America in which Budweiser invited its Facebook fans to experience talented local bands and artists and sample some of these news beers along with local food in Los Angeles, Phoenix, Denver, Dallas, St. Louis, Chicago, Nashville, Miami, Boston and New York.

Budweiser, an American-style lager, was introduced in 1876 when company founder Adolphus Busch set out to create the United States’ first truly national beer brand – brewed to be universally popular and transcend regional tastes. Each batch of Budweiser follows the same family recipe used by five generations of Busch family brewmasters.  Budweiser is a medium-bodied, flavorful, crisp and pure beer with blended layers of premium American and European hop aromas, brewed for the perfect balance of flavor and refreshment.  Budweiser is made using time-honored methods including “kraeusening” for natural carbonation and Beechwood aging, which results in unparalleled balance and character.  The brand celebrates great times and has used the phrase “Grab Some Buds” in advertising since 2010.