Dick’s Brewing is proud to release our highly anticipated Imperial Red again for the 2013 spring season! 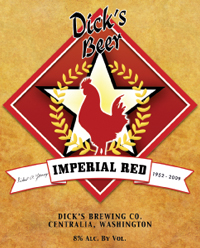 CENTRALIA, WA – The wait is over. The Imperial Red is back! The Dick’s crew is happy to bring back the highly anticipated Imperial Red since its original release in 2011. The Dick’s Irish Ale will also be available this season just in time for St. Patrick’s Day!

In honor of the late Dick Young, the Imperial Red is one of four brews from the Dick’s Dedication Series and one of the last recipes Dick had a hand in creating. The ABV is strong with this one measuring in at 8%. This Imperial Irish Style Ale malty brew brings strong caramel notes at first ending with a nice hoppy finish and hint of citrus to balance it out. The Red will be available this year for a limited release from February through April. Once it’s gone, it’s gone until next year! More than a few Dick’s fans say “they love this beer”…we know.

The Irish Ale is one of our great seasonal ales. What allows this red ale to be so approachable is the Melanoidin Malt which helps create the unique “toasty” flavor. Our use of specialty grains make this beer unique and the complexity of the roasted Munich Malt and rich caramel malt give this beer its depth and richness of flavor! The intricate culmination of malt provides plenty of body and mouth feel to this gorgeous Irish style ale.

You can find both the Imperial Red and Irish Ale on tap at Northwest Sausage & Deli or at the brewery Tasting Room. Although a seasonal, the Irish Ale can magically appear in our Variety Packs. The Imperial Red will be available in 22 oz. bottles at both locations and makes a great pairing with steak dinners. Come like our new Dick’s Brewing Company Facebook page to get all the latest updates on Dick’s Brew News.