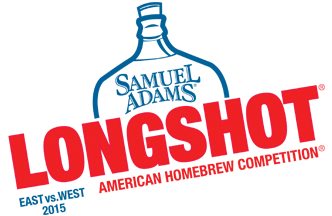 BOSTON, March 9, 2015 /PRNewswire/ — From sports matchups to the country’s top burger joints, East vs. West is a classic rivalry, and Samuel Adams is throwing it to the American homebrewing community to let them settle the score. The brewers at Samuel Adams today announce a call for entries for the 2015 LongShot American Homebrew Contest, which for the first time ever will feature a new battle of “East vs. West”, with one creative homebrew chosen from each side of the Mississippi. Winners will be announced at the 2015 Great American Beer Festival in Denver, with the entries from two winning homebrewers, as well as one Samuel Adams employee winner, available in the Samuel Adams LongShot variety six-pack in 2016. Those interested in entering can visit www.samueladams.com/longshot for contest rules, regulations and information on purchasing a homebrewing kit. The homebrew submission window is May 1- 16, 2015.

Jim Koch, founder and brewer of Samuel Adams, has hosted the annual LongShot homebrew contest for nearly 20 years to celebrate American homebrewers who continue to create innovative, full-flavored brews and challenge the notion of what beer can be, just as Jim did in his kitchen over 30 years ago when he brewed the first batch of Samuel Adams Boston Lager. Since that time, American craft beer has undergone a revolution, with more than 3,000 brewers currently operating, compared to about 50 in 1984. The steady growth of America’s craft brewing community is thanks in large part to homebrewers and craft brewers like Jim Koch, who are resilient, unafraid to challenge the status quo, and passionate about pushing the limits of craft beer. Past LongShot American Homebrew Contest winners have gone on to become professional brewers, turning their homebrewing hobby into a full-time career. The most recent example is Cesar Marron, winner of the 2013 LongShot American Homebrew Contest, who opened Sketchbook Brewing Company in Evanston, IL following his win.

“There are more breweries currently operating in the U.S. than at almost any time in our country’s history, and the Samuel Adams LongShot contest aims to recognize American homebrewers as the true driving force behind this growth,” said Jim Koch. “Without the unrelenting innovation and creativity of homebrewers, our craft beer culture wouldn’t be nearly as vibrant and exciting as it is today.”

About the 2014 winners:
Greg Rasmussen’s “Raspy’s Robust Porter”: This traditional robust porter is full of complex malt flavors. The variety of malts in this beer contribute flavors of cocoa, coffee, toffee, and slight vanilla to create a wonderful roasted yet balanced beer. This gorgeous mahogany porter has a roasty and chocolate aroma. The beer is complemented by slight citrus and earthy notes from the US and UK hops.

Matthew Knott’s “Smokehouse Rauchbier”: This deep copper colored Rauchbier has all of the flavors you would expect in this traditional style: smoky, slightly savory with a malty sweetness and roastiness. The smoky flavors are balanced by a light toffee malt character and slight citrus from the hops. The brew finishes with a lingering smokiness, sweetness and subtle hop character..

John Marra’s “Dark Night in Brooklyn” Dunkelweiss: This beer is brewed with a traditional Bavarian yeast that contributes to the variety of aromas and flavors. The aroma is characterized with notes of tropical fruits and clove. The malted wheat contributes a bright clean cereal note, which complements the spicy flavors of clove, nutmeg, banana and a slight sweetness.