Eagle, Colo. (January 14, 2015)— This past Friday, two dozen leading craft brewers and brewery executives descended upon Sylvan Lake outside of Eagle, Colo., for the first annual 2015 Ice & Ales Invitational, hosted by Wyeast Laboratories, Inc. and DRAFT Magazine. The hospitality event was held in conjunction with the 15th Annual Big Beers, Belgians and Barleywines Festival. The event kicked-off with eagles soaring overhead, while participants rotated between ice-fishing shanties and a warming cabin, competing to catch the most and biggest fish of the day. Participants also battled for individual prizes and the right to be named the 2015 Ice & Ales Grand Champion Brewery. “It’s perfect weather, and we’re all enjoying sitting outside in the sunshine,” noted Wyeast Laboratories, Inc. founder Jeanette Kreft-Logsdon while ice fishing and sipping on an Mephistopheles’ Stout from Boulder-based Avery Brewing Company. “The Ice & Ales Invitational creates camaraderie among our participants as we hang out in a unique environment.”2015 Ice & Ales Invitational Winners: 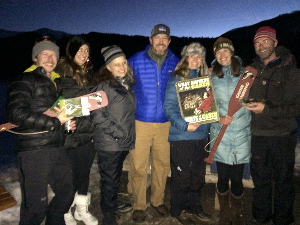 “The Ice & Ales Invitational took the industry reps out of the typical context of festivals, and put us on ice with fishing poles … which many of us had never done before,” noted Erika Rietz, Founder & Editor, DRAFT Magazine. “These are not just our colleagues, they’re also our friends, so getting together in this environment was a real bonding experience.” “It was a really awesome event … everything from getting us out to Sylvan Lake State Park, to hooking us up with an incredible spread of food, plus I didn’t drink a bad beer,” noted Brandon Orr, Brewer for Nebraska Brewing Company, which will expand into Colorado next month. Brian Dunn, Founder of Great Divide Brewing Co., remarked: “It was all about the company. There were great people there: great suppliers, great brewers, great camaraderie. I was with a great team, we got a great fishing hole, we happened to win the competition.” “This is the most in a unique event I’ve been to at a brewing festival ever, with the best group of people,” said Lauren Salazar, Specialty Brand Manager/Sensory Specialist, New Belgium Brewing Co. “Most people didn’t know each other at the beginning of the day, but everyone knew each other at the end of the day. To me, it was immediately the most intriguing invitation of the festival, and in the end the most fun!”

About Wyeast Laboratories, Inc.Since 1986, Wyeast Laboratories, Inc. has been producing Pure Liquid Yeast cultures and fermentations products crafted with skill and integrity.  Our continuing devotion to providing superior products, insightful technical expertise and helpful customer service has earned Wyeast Laboratories the reputation as a worldwide industry leader. Wyeast Laboratories, Inc. Pure Liquid Yeast cultures are shipped directly to breweries, wineries, and cideries, with purity, viability, and freshness guaranteed. Follow us on Twitter at @WyeastLab; Friend us on Facebook. About DRAFT MagazineDRAFT Magazine was launched in September of 2006 at the Great American Beer Festival. Since that time, DRAFT has built the largest subscription and circulation base of its kind, offering the highest quality beer and beer-related content available on the market, as well as the most robust and widespread distribution and marketing platform in the industry. DRAFT taps into the freshest flavors, unique experiences and emerging trends in beer, plus food, travel and leisure for a 360-degree view of the modern drinker’s lifestyle.