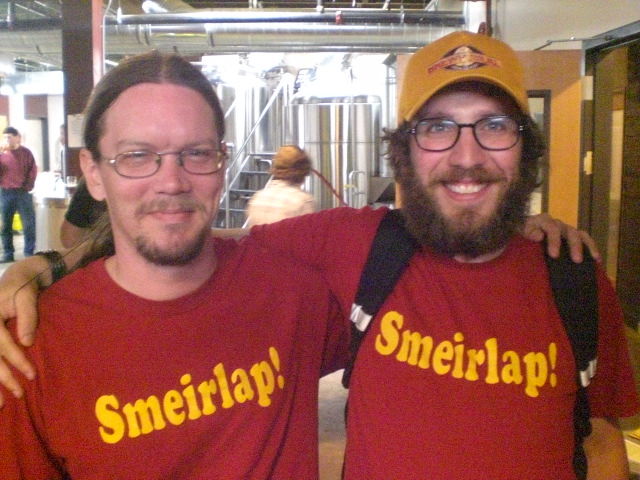 I know what you might be thinking. How can there be only five? Well, believe me, there’s a lot more. But for the sake of brevity in a state of seemingly endless craft beer options, five seems like a nice round number. Besides, I am really confident that you will be pleased with these five. Of course, there will always be the people who say “I don’t like hops” or “I don’t like sours.” Well, than, this list might not be for you and your more narrowed palate. However, if you’re like me and love all craft beer, these five, I am confident, you will find are nothing short of spectacular. 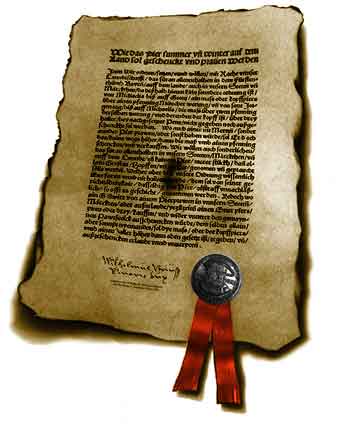 The Reinheitsgebot, for those unfamiliar, is a Bavarian purity order dating back to 1516 that decrees that only three ingredients be allowed in beer: water, malt, and hops (back then they were unaware that yeast, a microorganism, was in fact present). You will notice that most beers still being produced in Germany and throughout modern day Bavaria follow this regiment. I can obviously see some upside to such a movement, however, in the spirit of fun and innovation, I tend to side with the Belgians, who love to get jiggy with a beer. Fruit, spice, and other adjunct ingredients can really liven up a brew, and on top of this, as a food item, why should beer be singled out and forever simplified? Don’t get me wrong, a clean Marzen or Pils with the straight ahead recipes of yore can be just a much rewarding as a zany spice/fruit beer. But loosening the laws of Reinheitsgebot, to me, just simply allows for more exploration and innovation, which, I suppose I often find myself having an inclination towards.

This list does not consist of all Oregon beers, either. It is simply a list of five beers that have been or are available in the Oregon market that you should be enjoying. If you are a brewer or brewery employee reading this and realize that your brewery doesn’t have a beer on this list, please relax. You surely make good beer, and, after all, there are literally thousands of delicious beers out there. I am simply offering up a microcosm of malty yumminess that I feel you must try. It is now your goal to taste the following beers:

1. Upright Late Harvest Ale – The latest specialty beer released from Upright Brewing. I really love everything about this barrel-aged sour brew from the beautiful artwork on the bottle designed by Ezra Johnson-Greenough (dude is an amazing artist) to the delectable liquid that resides within. Upright brewer-owner Alex Ganum’s vision for a brewer was quite well executed from the get-go. His imagination for recipe development employing rad ingredients in his beers like yarrow, calendula flower, hyssop, hibiscus, and a lot more prove that he is undeterred by convention. On top of that Ganum actually pulls it off with awesome foody-centric beers that even wine geeks should applaud.  Here, the Late Harvest is a distinct farmhouse-brown ale brewed with pomegranate seeds, grains of paradise and Tasmanian peppercorns, that combine to produce a welcomingly tart and lush flavor with edgy herbal gusto bolstered with a hardy grain underbelly consisting of caramelly malts. Late Harvest was release just recently, but has been aging for more than eight months. 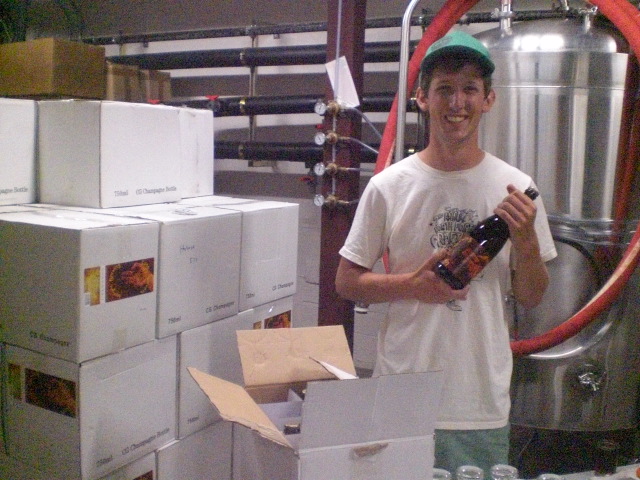 2. Stone Dogfish Head Victory Saison du Buff – Perhaps another love it or hate it beer is found here in this, yet another collaborative effort spearheaded by Stone Brewing of Escondido , California. The thing with collaborative beer ventures is that sometimes they actually workout really well. In fact, I’d say it is safe to say that the breweries really nailed it on this one. Many beer lovers will tell you that saisons are in vogue right now, and why not? In the midst of a wonderful summer a nice saison really does hit the spot. And, Oregonians, especially Portlanders have proven our love for farmhouse ales by the turnout at this year’s Cheers To Belgian Beers which showcased a healthy variety of beers all brewed with the same strain of Belgian farmhouse yeast. Some saison makers are fervently opposed to spicing their saisons believing that the yeast should serve as spice enough, while others love to play with and explore new ingedients that can set a beer apart and give it more than a Reinheitsgebot whirl (like the above mentioned Upright Brewery). Stone Dogfish Victory’s Saison du Buff is absolutely the later. Parsley, sage, rosemary, and thyme. Sounds like the Simon & Garfunkel release of 1966, this beer, similarly, is an all time great. This golden yellow beer unlocks a different impression upon each sip. Initially I was struck by the rosemary, which, if you have ever run your fingers through a stock of, really is a powerful olfactory herb. The brewers did a nice job of bringing forth the other three spices as the beer unfolds without losing the integrity of the saison’s yeasty base.

3. FiftyFifty Concentrated Evil – I’ve been talking a lot lately about this beer. Not only is the beer a rarity, but the brewery FiftyFifty from Truckee, California doesn’t make many appearances in Oregon shy of the Oregon Brewers Festival. So far, the limited selection I’ve sampled from Brewmaster Todd Ashman is leading me to believe the guy is a brewing genius. His witbier is undoubtedly one of best American renditions I’ve yet to try, and this bold brute is no less tantalizing. A Belgian-style strong dark ale. Brewed with raisins, coconut sugar, and Panusta sugar. Recently Mountain Peoples Distributors brought a super limited quantity of 22-ounce bottles to Oregon. I recently bought all of these I could get my hands on and encourage you to do the same. At 11% ABV, this dark, fruity, esterous ale should be good to cellar for many months to come. 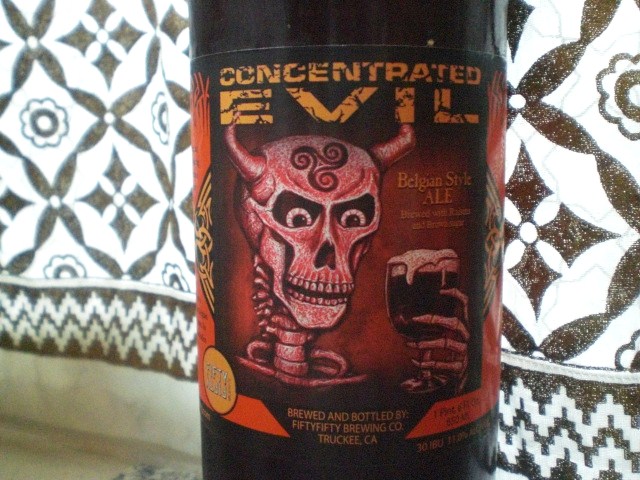 4. Cascade Apricot Ale – Does it get any better than this? Methinks not. There is a reason why Cascade Brewmaster Ron Gansberg is so often referred to as the “imagineer” behind the breweries wild lactic ales. Finding a balance between extremeness and palatability has landed Gansberg and company national acclaim. Last year at the Great American Beer Fest, Cascade took home both Gold and Silver medals in the barrel-aged category for Bourbonic Plague and Vlad the Imp Aler, respectively, a spectacularly impressive feat. Most hardcore beer geeks in Portland will make mention of Gansberg’s beers when rattling off a list of favorites. It is perhaps his work with fruit beers and blending that really has defined much of his aptitude here. The Apricot Ale in its second year in 750ml bottles has been a bench mark for inventiveness. Employing 2600 pounds of fresh picked fruit from Wapato, Washington, this beer is best described by the brewer as “very fruity with a lush flavor of apricots.” Even more so than in the first year the beer came to be, the Apricot as Gansberg says “really captured the essence of (the fruit) this year.” If you’re lucky enough to find a bottle of this beer, get it, and share it with a beer geek friend. 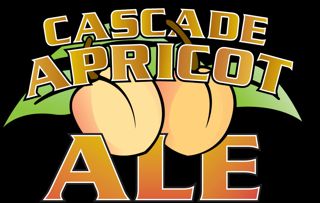 5. Oakshire Overcast Espresso Stout – I have to be honest, I am not much of a coffee drinker. In fact, I don’t drink the stuff but a few times a year. I love the smell of freshly brewed coffee, but for some reason, the acidity of most coffee drinks and the affects of its caffeine just don’t do it for me. However, when a beer is brewed with coffee in the right balance, it can really do wonders, especially a dark-bodied brew with a hearty malt bill. Deschutes Imperial Black Butte Porter and Obsidian Stout as well as Hopworks Survivor Seven Grain Stout are all great examples of beers brewed with java that I adore. Perhaps my favorite of all is Oakshire’s Overcast Espresso Stout. Perfect for the gray skies of winter, yet fitting as a breakfast brew year round, the Overcast is simply a perfect coffee beer. A silver medal winner at the 2009 GABF in the coffee beer category, Overcast is made with Organic Wandering Goat Chupacabra espresso, roasted locally in Eugene. This signature blend of the roastery is cold pressed, soaked in water for 13 hours, then added to the finished beer. The coffee never goes into the boil kettle. This leaves out a lot of harshness that you might have experienced from other brewery’s coffee beers. The base beer for the Overcast is a medium bodied stout with Northwest 2-Row, Chocolate, Roasted, and Caramel 120 malts as well as rolled oats. Oakshire Brewmaster Matt Van Wyk calls this beer “an approachable dark” and says “a lot of people look at dark beer and instantly are afraid of it, but this is a beer we sell a lot of in the summer.” It’s easy to see why. A light 5.8% ABV body with lots of complexity makes the Overcast a year round treat. 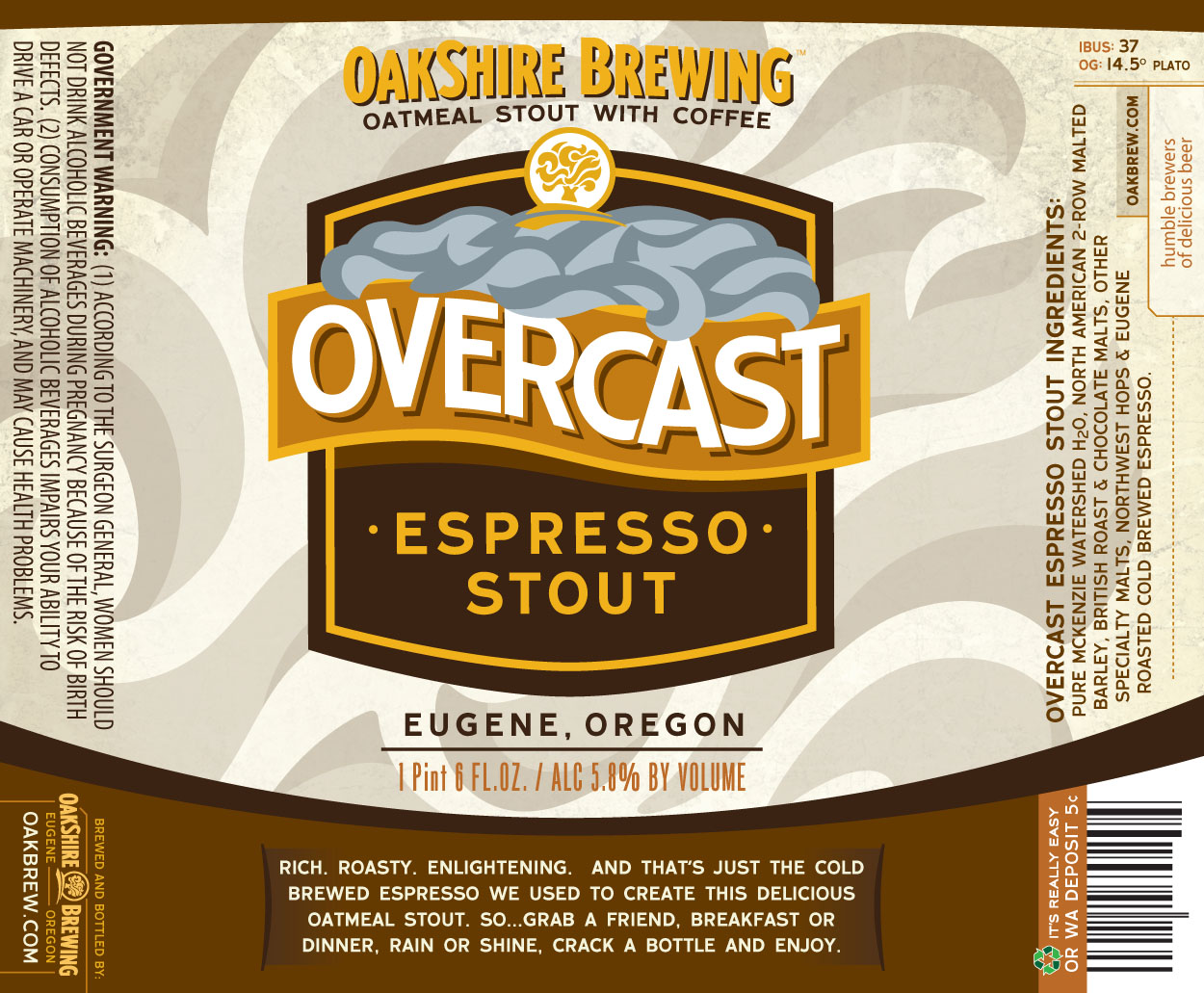