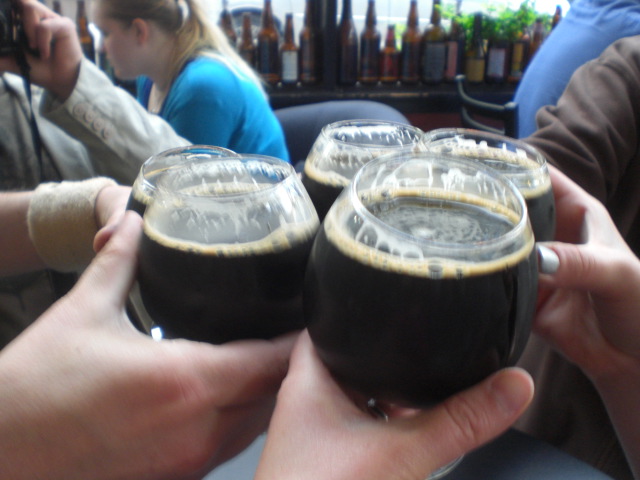 Even though 2010 is behind us, we at Brewpublic have been reminiscing about some of the best beers we drank last year already. We asked a few of our closest Beer Geek friends to send us a list of their top 5 beers of 2010. With hoping to get as many responses as possible, we held off on putting up the lists until we were sure we got all if not most of them in (sorry if we missed you!).

From reviewing the lists, it appears that Cascade Brewing was the definite standout among folks from 2010. Coming in high with mentions were also Upright Brewing, Block 15, Double Mountain, Barley Brown’s and Deschutes (in about that order for Oregon beer).

Without further adieu, here is what people had to say really stood out for them in 2010.

Angelo De Ieso
People love lists and we the beer geeks are no exception, so here’s a handful of my faves from 2010. Beer, like music and food is a passion for which enthusiasts appreciate variety. That being said, these top 5’s are perhaps just a microcosm of the many wonderful brews I’ve thoroughly appreciated throughout the past year:

Cascade sour beers – too many to pick a favorite, but the complex and inviting tartness along with fruit and barrel profiles were simply my favorite of 2011. Stand outs included Sour Blueberry Wheat, Bourbonic Plague, Vlad the Impaler, Noyeaux, Kriek, and all the quenching Goses. On top of all this, who doesn’t love Ron Gansberg. He’s an impassioned and all around awesome man.

Upright Brewing – Not afraid to take chances and often pulling it off puts Upright at the top of this year’s brews again. Four Play, Fatali Four, Late Harvest, Redwood Lager and the go-to Five are prime examples of the magic that Alex Ganum and Gerritt Ill are orchestrating down in the basement of the Leftbank Building in Northeast Portland.

Barley Brown’s – While many trending beer lovers will tell you that big hops are out of vogue, Barley Brown’s little four barrel brew house keeps putting forth some amazing hopped up offerings that showcase both sharp bitterness and divine aromatic qualities ranging from dankly resinous to aromatically floral. Turmoil CDA, WFO IPA, and Disorder Stout…OMFG! Shawn Kelso is a savant when it comes to lupulin and his GABF medals are the proof in the pudding.

Block 15 – Speaking of pudding, did any holiday beer in the Northwest captivate our imaginations this year such as Block 15’s Figgy Pudding. And the enterprising spirit of owner Nick Arzner and brewmaster Steve van Rossem is unabashedly forward thinking. From wild ales to hop mammoths, B15 is always pushing the envelope and most often coming out above board, The artisan sustainably minded food options and outstanding customer service by a staff of friendly people at the Corvallis brewpub make them an obvious choice. A trip down to the cellar of Block 15 is something not soon forgotten–a real treasure.

Oakshire – Ever since brewer Matt Van Wyk came to Oregon from his Midwest homeland, he’s injected more of a sense of adventure and undeniable know-how in the scene. Like most of the aforementioned artists, Matt’s brought three solid dimensions to craft beer. From the architectural, imaginative, and commercial understanding of beer, juxtaposing it with foods, and putting himself and Jeff Althouse’s fine brewery out there Matt over the last year has won the hearts and palate of many PacNW beer lovers. Also, lead brewer Joe Jasper is no slouch when it comes to putting forth consistent creative brews. I can see Joe running his own brewery someday, or perhaps continuing Oakshire down the path of humble domination. Some favorites of ‘010 were the Gnome series, the Espresso Stout, and their scrumdittiliumptious Amber. Not a bad beer have I had from the Oakshire folks in the past year, so hats off!

There’s a lot of others I could throw into this list but these five stand out off the top of my head. I could easy put Double Mountain, Widmer, or Pelican on this list as well.

I know it isn’t a beer but it’s worth mentioning
Wandering Angus Wickson Single Varietal: because a cider like this deserves recognition. 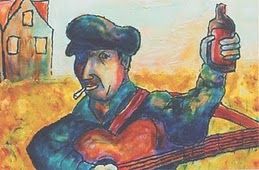 All of the above are excellent, but the Barley Brown’s Chaos (yeah, that’s right, Chaos) I had from the bright tank tonight in Baker City takes the cake.

Trend noted by Adam:
More breweries now in the US than we had over 100 years ago, well before prohibition (as reported by the Brewers Association).  Can all these brewers get a piece of the pie?  YES!  The pie keeps getting bigger.  Cheers!

Margaret, Brewpublic Assistant
Block 15 Figgy Pudding
Probably the best holiday beer of the year. I found this beer to be full of many complex flavors that blended to a very enjoyable beer. Hints of figs, spices and brandy barrels makes us all wanting a figgy pudding during Christmas.

Boneyard Bona Fide Pale
I was lucky enough to visit this great new brewery in Bend this past summer and was impressed with their beers. Their pale is a super florally hopped, session beer. Finally, someone figured out that big hop flavor does not have to come from a big beer.

O’Dell’s Mad Beet Farmer
I have never had a beer made with beets before until this year and I’d have to say, I loved it! A bit zesty in the flavor and a little earthy tasting, I loved this beer for its uniqueness and drinkability. As an honorable mention the O’Dell’s Brett Porter was also a very impressive beer.

Brooklyn Sorachi Ace
A very crisp, refreshing Saison that has a lovely citrus characteristic coming from the hops and the yeast too. 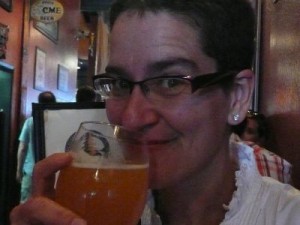 – Full Sale Session – was a classic from the moment I tried it & still rates high.

– Stone’s Smoked Porter w/Vanilla – oh my gosh – tried it today, then tried it in a milkshake. Deevine. 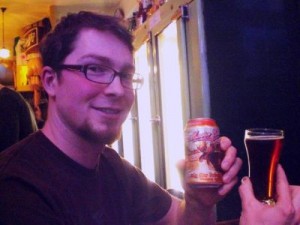 Tim Ensign of Mountain People Disturbing
1. Sierra Nevada Estate Harvest Ale- After living in Chico for 9 years I became a huge fan of Sierra Nevada, especially their Fresh Hop Harvest Ale. This was the second vintage of this beer made with ALL estate grown Hops & Barley, last year’s really disappointed me with a lack of hop character but the 2010 vintage was amazing. As a small scale farmer, I think the concept of what they are doing with this beer is inspiring. 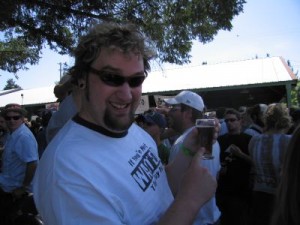 2. Block 15 Figgy Pudding- Brewer Nick Arzner makes some amazing beers at Block 15 in Corvallis and this is just another great example. I tried this (a few times) at the Holiday Ale Fest and it is just delicious! Figgy Pudding is an English strong ale matured in brandy barrels and conditioned with figs and a touch of spice.

3. Fort George Omegatex Imperial IPA- This brew is from Fort George, one of Oregon’s best up and coming breweries. They produce Vortex IPA one amazing beast of an IPA at 7.5abv with so much hops it’s bigger than many imperial IPA’s out there, so they decided to brew an imperial version for the Pacific NW Brewcup and they nailed it, at over 9%abv this hop monster was just delicious!

4. Blue Frog 10th Anniversary Barrel aged Imperial Stout- This smaller brewery out of Fairfield, CA has gone under the radar of most Oregonians due to the limited quantity of beer that makes it here. We were lucky enough to grab 40 cases of this 10.5%abv monster that was aged in wine cask for 16 months. This beer has smooth layers of dark malt, is slightly sour, and oh so delicious.

5. El Toro Awesome IPA- After El Toro made it into the Oregon market this year I have been reminded of how amazing their beers are. Brewer/Owner Geno’s Acevedo Awesome IPA is a true testament to the hop with over 4lbs per barrel and at only 6.5%abv this is one of the most flavorful best uses of hops out there. Medium bitterness with HUGE hop flavor (take that Pliny)…… 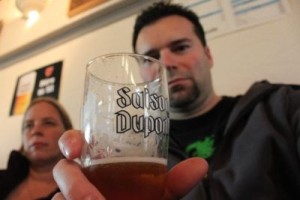 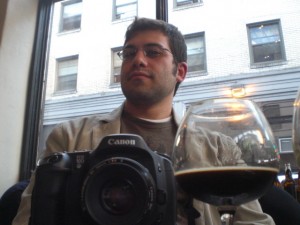 – Hair of the Dog Adam From the Wood

– Sierra Nevada 30th Anniversary Fritz and Ken’s Ale – A superb stout from a superb brewery. Have a few bottles aging for future enjoyment. Here’s to another 30 years!
– Double Mountain Devil’s Kriek – A more cherry forward example of this style but with Brett this beer comes off very strong.
– Oakshire Mud Puddle 100% Organic Chocolate Porter – Brewed for the 2010 North American Organic Brewers Festival, this 100% organic beer infused organic cocoa nibs into a nice, deep rich porter. Hope that this one gets placed on the brewing schedule again.
– H.U.B. Abominable Winter Ale – Is it Bumble from Rudolph that attracted me to this beer or is it the piney, citrus forwardness of this winter beer to help you through the dreary winter days of the Pacific Northwest?
– Rock Bottom-Chicago German Pils – This beer was brewed for the 2010 Craft Brewers Conference held in Chicago. This finely brewed Pilsner used German grown hops from the German Hop Growers Association to produce a nice spicy, citrusy hop nose with a noticeable Pilsner malt back to it. This beer was quite tasty with enough hops to make it a delight for this hophead.

Honorable Mention: Spaten Oktoberfest – How can you beat the first beer you drank at the 200th Anniversary of Oktoberfest? The setting of listening to Oom-pah bands alongside others in lederhosen and the beautiful ladies in dirndls makes it that much memorable. Looking forward to my return visit sometime down the road.

Brady Walen of the www.dailypull.com

Yetta Vorobik, Owner of The Hop and Vine

Last but not least we have a few top 5 beers lists from Ben Edmunds, brewer at Breakside Brewery (just because he is an overachiever and tried a lot of great beer this year!) 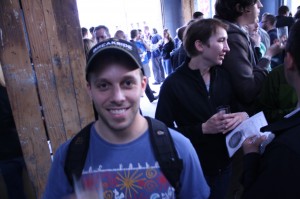