An exercise in alliteration: BridgePort Beertown Brown and a Bendian Buzzsaw are Back.

You may remember Brewpublic’s previous Best of the Browns post.  Well, thanks to Kendall a R-West, we are reminded of yet another flavorful brown ale from right here in the Rose City.  Say hello once again to BridgePort Brewing Company’s Beertown Brown.  Once again available in stores throughout the Pacific Northwest, the Beertown is a medium-bodied 5.2% ABV caramel-nut noted ale with a tinge of spicy NW hops (20 IBU) and a bit of chewy roasted chocolate and caramel malts.  The light mahogany-chestnut body brings together Northwest and tradition English mild ale styles in a highly quaffable late winter’s brew. 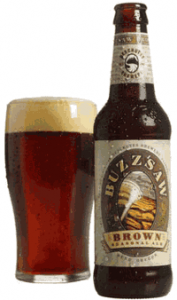 BeerNew.org reminds us that another boisterous brown besieges us from Bend.  Say hello once again to Deschutes Brewing Company’s Buzzsaw Brown, the brewery’s first seasonal release of 2009.  A meditative step down from the satiatingly skull-crushing tidal Abyss (A-beast is more like it), the Buzzsaw cuts through the final layers of this exceptionally wintry season with more flavor than your average brown.  As Beervana’s Jeff Alworth notes, of Buzzsaw in his 2006 review:

The palate is also familiar–sweet and light, also akin to Black Butte. There are a few hops, enough to give the beer additional interest and balance. It’s essentially a session ale, so it’s not bursting with intensity. Yet it’s that kind of beer that immediately has a comfortable, recognizable quality, like you’ve been tippling pints for decades.

One of Deschutes’ brewmaster Larry Sidor‘s favorite beers, the ‘Saw is actually more of an amber-bodied brew.  At 4.8% ABV, its favorable hop timber (28 IBU) makes the beer pairs well with a variety of foods, especially mashed potatoes and veggie burritos.

Bam!  Brewpublic now bids you bye-bye, because brews beckon our ‘buds to bounce to bars beholding the benefits of said browns.