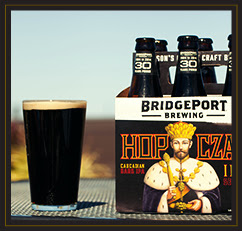 When BridgePort Brewing announced that they were changing up their popular Hop Czar Imperial IPA earlier this year we were a bit disappointed but also interested in this new rotating series of IPA’s. The next beer released in this series is Hop Czar Cascadian Dark IPA.

After releasing Dark Rain Pale Ale three years ago, Bridgeport is back at it releasing another dark hoppy beer, but now in their Hops Czar Series. From combining Oregon grown Cascade, Goldings and Centennial hops and full flavored dark malts creates this smooth, dark, yet drinkable IPA.

In naming this new Hop Czar it seems that BridgePort took a hybrid approach. Not taking the big leap to the Pacific Northwest preferred Cascadian Dark Ale but keeping its distance from the more nationally common Black IPA.

Hop Czar Cascadian Dark IPA is the darkest beer that BridgePort has ever brewed thanks to the use of Midnight Wheat, a first for the 30 year old brewery. This ‘Dark Czar’ comes in at a hearty 7.5% ABV, 17.2 OG and 85 IBUs. Fans can try it on tap at the brewpub or look for it in stores wherever BridgePort is sold.