Deschutes Brewery has an array of new releases hitting the market. Some of these are old standbys while others are brand new to their lineup. These releases include Not The Stoic, Hop in the Dark, Twilight Summer Ale, Foray Belgian-Style IPA, and Black Butte XXVI. A few of these are available now while others will be released over the coming months. 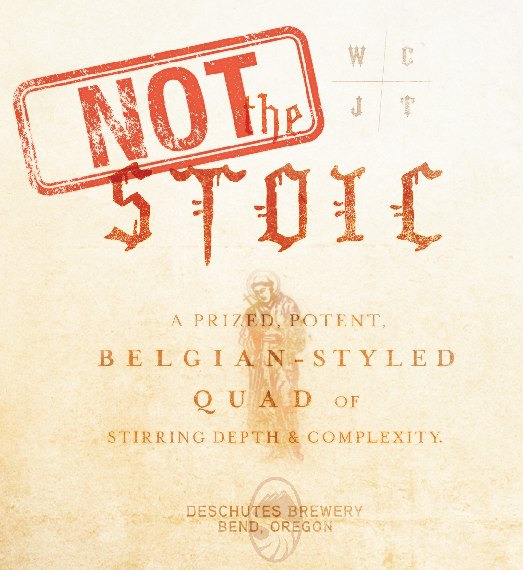 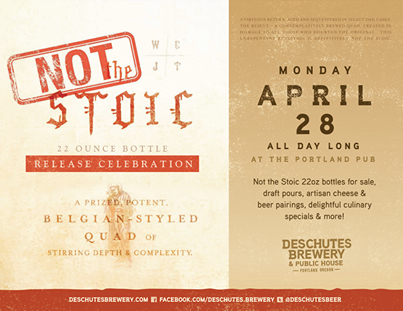 With the expansion of our coveted Reserve Series this year, fans will be happy to hear about a new addition to the lineup: “Not the Stoic”. Ingredients like Belgian candy sugar, beet and date sugars, and pomegranate molasses impart a clean, tangy sweetness.  This contemplatively brewed Belgian-styled quad was aged and sequestered in Rye Whiskey and Pinot Noir barrels, resulting in a complex flavor that is an entirely new rendition (with a nod to the original “The Stoic” that was released in 2011).

Join Deschute’s Portland Pub on Monday, April 28th from 11AM – 10PM for their celebration of their newest Reserve Series release – Not the Stoic! Aged 15% in rye whisky barrels, 15% in wine barrels and brewed with pomegranate molasses, this tasty treat rings in at 12% ABV & 15 BUs. With a deep mahogany color, rich caramel and stone fruit flavors, we felt it was only appropriate to celebrate this beer with delightful artisan cheese pairings! Deschutes will also have additional culinary specials highlighting this exquisite beer, so don’t miss out! 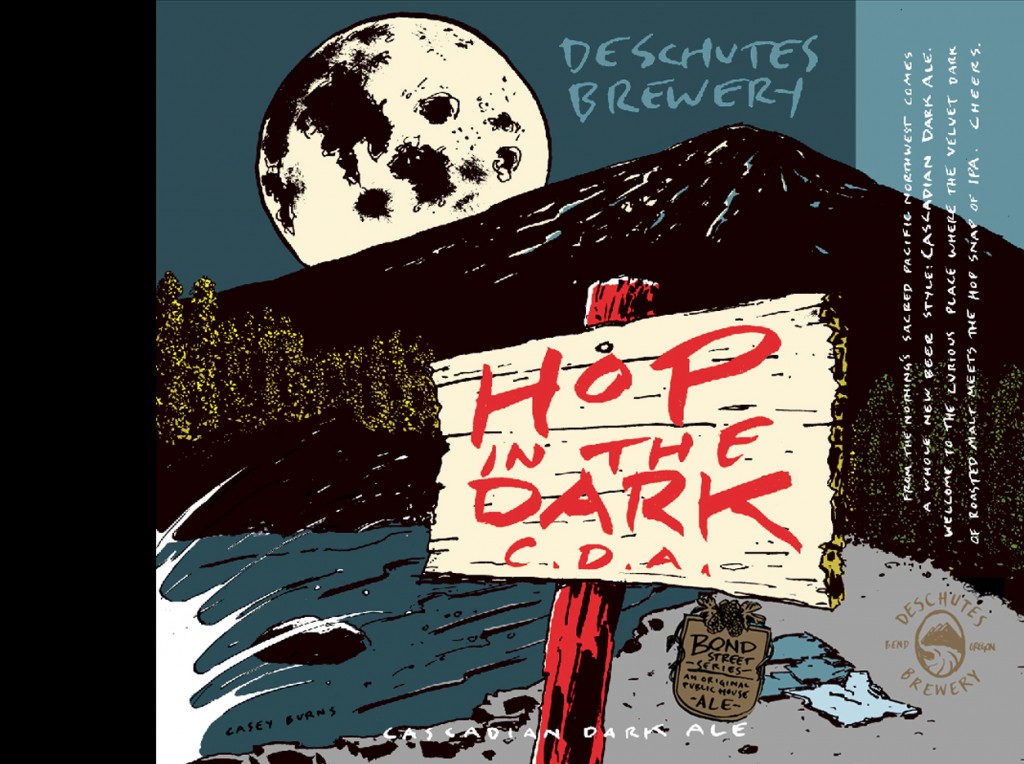 Also scheduled for release in April is Hop in the Dark. Deschutes’ Cascadian Dark Ale is part of their Bond Street Series that is available in 22-ounce bottles and on draft.

After taking a brief hiatus from its spot in their summer Bond Street Series, their Cascadian Dark Ale, Hop in the Dark, returns for a special appearance. Originally released in 2010 with great assurance, this dark colored hop assault quickly became a darling of the Black IPA movement. The citrusy hop and roasted malt flavors are “masterfully balanced” and satisfy both the dark beer and hop head in all of us.

Making its annual summer return will be Twilight Summer Ale. This summer seasonal will be available from May to September in 6-packs, 12-packs and on draft. Twilight is available everywhere Deschutes is sold. 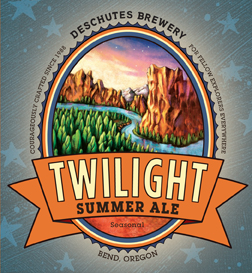 When Twilight Summer Ale starts to show up on the shelves of your favorite store (or tap handles of your favorite bar), then you can be sure that summer is on the way. The vigorous, yet easy-drinking hop essence of this brew is as essential to the season as baseball, BBQs and the smell of freshly cut grass. Twilight Summer Ale’s crisp wafer-like body complements its clever medley of four hops and malts. Whole cone Amarillo, Northern Brewer, Cascade, and Tettnang hops sing next to subtle Cara-Pils and Carastan malts. Twilight Summer Ale is magic guaranteed to make the summer even more rewarding and at 5% ABV and 35 IBUs this beer is sure to be a hit during the warmer months. 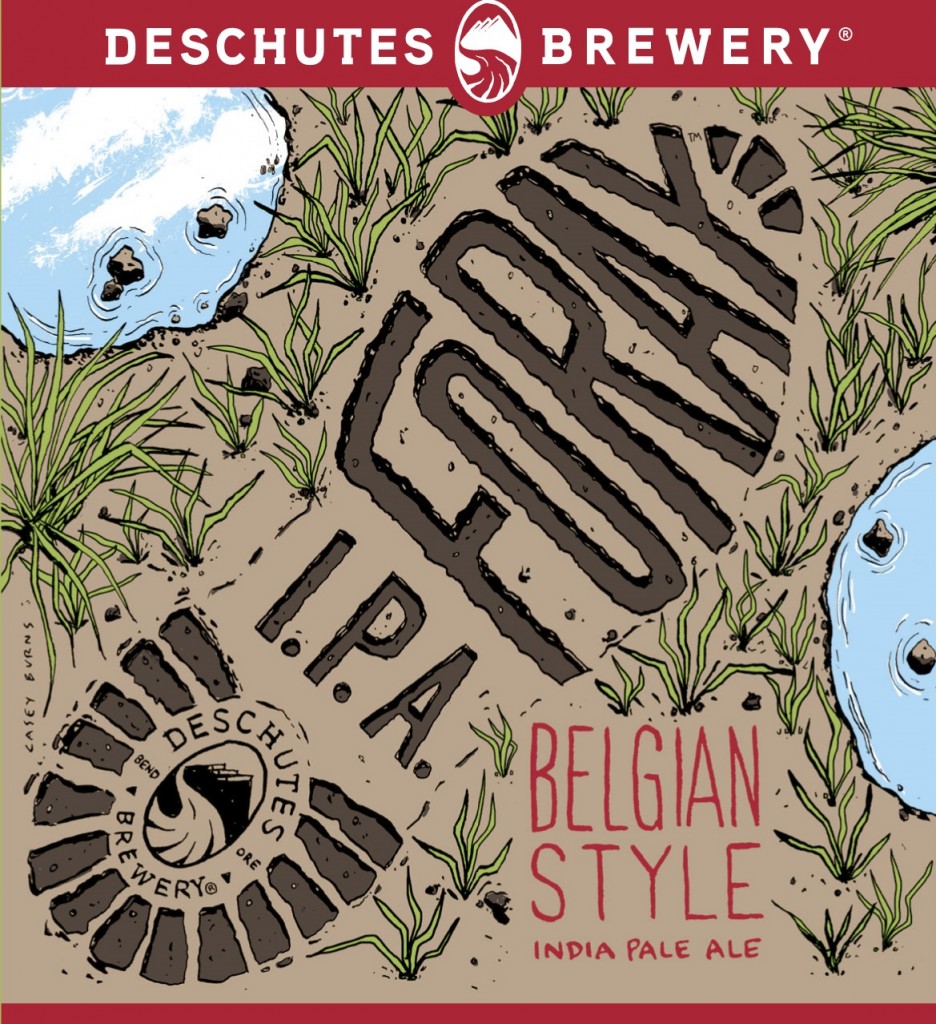 A brand-new addition to Deschutes lineup in June will be Foray Belgian-Style IPA. This beer made its way into bottles the same way all of their Bond Street Series beers do – by being a popular “experiment” at the two Deschutes pubs. When their “focus group” of pub patrons rave about one of their pub exclusive beers loud enough and for long enough, Deschutes make every attempt to make the beer more widely available to all of their fans. Foray is a journey during which Belgian yeast delivers hints of apples and pear, and a citrus Galaxy hop aroma make this a trip worth taking. Foray is part of the Bond Street Series available in 22-ounce bottles and on draft with limited availability everywhere Deschutes is sold

Every year, Deschutes celebrates their anniversary with a huge double version of their flagship Black Butte Porter. Their brewers love to experiment and they always add some fun new ingredients to this beer to celebrate. In the past, you may have found chilies, chocolate nibs, dates, figs and other such goodies. This year, the brewmasters say that they’ve added cranberries, pomegranate molasses and Theo’s cocoa nibs to this 50 percent bourbon barrel-aged wonder. Like all of Deschutes Reserve Series beers, they encourage you to drink one upon its release and put some away in your cellar for later. Some things just get better with age!

So make sure to keep your eyes out for these fabulous upcoming releases from one of Oregon’s pioneer breweries, Deschutes.