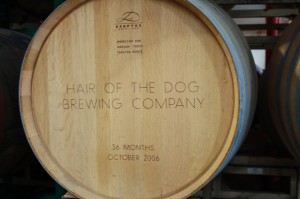 It’s not very often that I start drinking in the A.M.   But when it comes to events like this and beers like these, drinking in the early morning isn’t out of bounds either.  By the time 9 o’clock rolled around, I had experienced several rare beers that I had never had before.  I spoke with Preston Weesner, an organizer of the Portland International Beerfest and the highly anticipated Holiday Ale Fest.  Weesner informed me of seemingly endless wonderful beers coming up at this event  I was feeling almost overwhelmed with craft beer…if that is at all possible.

Alan Sprints posted his list of available beers for the Hair of the Dog dock sale to the left of the garage door or the brewery to the bedazzlement of the zealous beer pilgrims.  It was made official-the Cherry Adam from the Wood would be available.  Also, Fred from the Wood, Doggie Claws, Blue Dot, and verticals of some of his brews would be available while supplies lasted.

Sprints posted the list of twelve numbered tickets who would be able to purchase the coveted bottles of Dave.  My girl Margaret appeared with ear to ear smiles and a Golden Ticket.  Veruca Salt was no where to be found, but the beer factory filled with wonderment and a peculiar mystique would allow us to pool our remaining funds to purchase a beer we’d only dreamed of experiencing.  Holy mackerel!

The crowd suddenly shifted forward.  I wondered “could this be the moment of truth?”  I had been to HOTD dock sales in years past, but never made an event of it like this.  The time was now.  The beer we all had anticipated so much would finally be in our grasp.  To be honest, though, the festivities leading up to the actual purchase were so much fun, that if I walked away with nothing other than my experience, I would leave more than satisfied.  We purchased our Cherry Adam and our bottle of Dave.  It seemed surreal (or maybe that was the Dark Lord taking hold).  My cell phone lit up with calls from friends who knew I was about to score.  I imagined their messages angling me to hook them up with the bounty before me.  They knew me well.  A friend with Cherry Adam from the Wood willing to share is a friend indeed.

Upon purchasing our HOTD specialties, we loaded the brews into our car around the corner to witness the slough of people in a seemingly infinite line.  The general attitude of the crowd was relaxed and upbeat.  Margaret and I headed back inside the brewery to sample the 2008 beers on tap.  We met up with a few familiar faces before deciding to head home for a well needed nap.  Before leaving the premise, I decided to interview the people at the end of the line.

Tim and Loraine were at the back of the line.  They smiled when I approached them with no tension or distress over probably not getting any Cherry Adam from the Wood. To the contrary, when I asked what they came for, Tim said “We came for beer.”  Silly me.  “A couple magnums of doggie claws would be nice.  But Alan always has beers” he said with a grin. It was evident that they were more about the whole experience than what geek beer they might score.  “I’ve seen Fred Eckhardt here” he continued. “I’m in a big Hair of the Dog phase. I love Blue Dot IPA with its lots of complexities.  I am a big fan.  It’s amazing the beer we had out here.  Portland is a big influence.”   Loraine, who recently moved to Portland from Wisconsin, concurred saying “It’s the atmosphere of people who enjoy it here like wine.”  According to Tim, who spent time in Toronto before coming to Portland five years ago, “back then there was no line.  It’s amazing how big this is.  It’s a big happy party.”  Tim continued to tell me another story about Hair of the Dog…  “I attended a friend’s wedding in India this summer, an old colleague that I worked with in Toronto ten years ago” he said. “My friend Karan’s one request that I take along? Hair of the Dog! I brought some Blue Dot, Fred, and Doggie Claws. These beers were an incredible hit! When my friends from Toronto come out here, this is the first brewery they want to go to.  They absolutely love the beer here.  This is the beer capital.”  Amen.