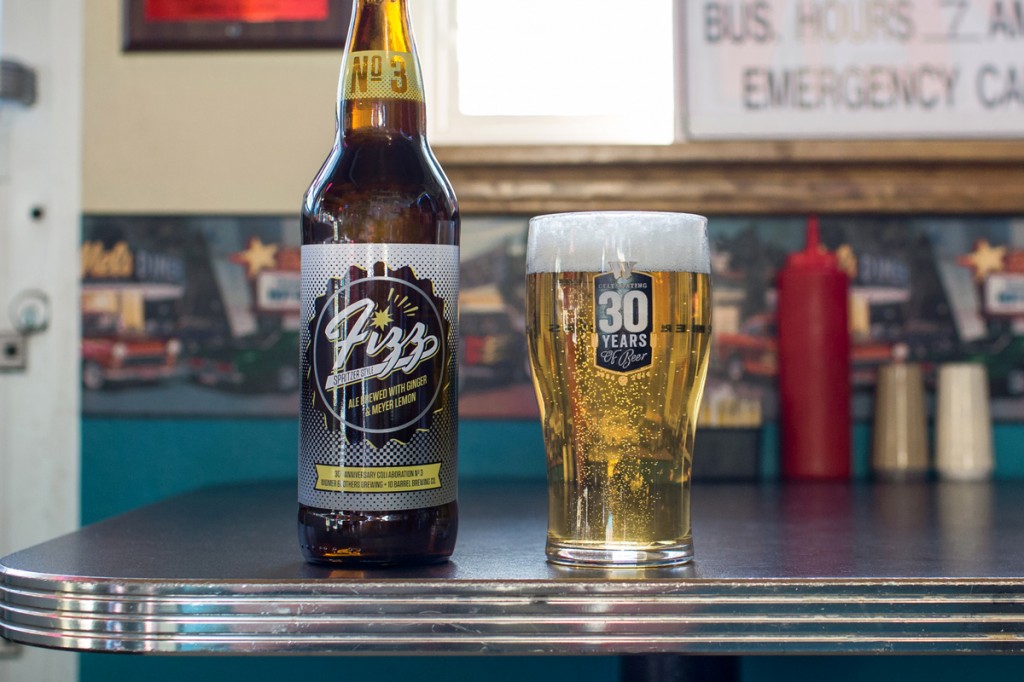 PORTLAND, Ore. – July 21, 2014 –Fizz, the third beer in Widmer Brothers Brewing’s 30th Anniversary Collaboration Series, was announced today. This unique, bubbly spritzer-style ale was brewed in collaboration with the brewing team at 10 Barrel Brewing in Bend, Ore. The release party in Portland will be at The Rookery at Raven & Rose this Thursday, July 24th beginning after 5pm.

Fizz is brewed with Meyer lemons and fresh ginger – giving it a bright citrus character and subtle hints of ginger spice – and finished with champagne yeast to really make it pop. This beer is great for the summer months, offering beer drinkers a refreshing respite from the heat.

Fizz is the third of six limited release collaboration beers with Oregon breweries to be released this year as part of a series that commemorates Widmer Brothers’ 30-year history. The 30th Anniversary Collaboration Series is a celebration of the Oregon brewing community and the unique camaraderie among craft brewers.

“We got together with the 10 Barrel team, and they helped push this beer way out of the box,” said Ben Dobler, innovation brewer at Widmer Brothers Brewing. “We’re calling Fizz a ‘spritzer-style ale’ because the beer was inspired by spritzer champagne cocktails, and we feel like it’s a great description of what the beer actually delivers. The champagne yeast, Meyer lemon, and fresh ginger give it a really refreshing summertime taste.”

Fizz will be available in the coming weeks in 22-ounce bottles and on draught, with limited distribution in select markets, including Portland, Seattle, San Francisco, San Diego, Minneapolis, New York City, Boston, and Philadelphia.

The next beer in the 30th Anniversary Collaboration Series will be brewed with Portland’s Gigantic Brewing and will be available in mid-August.

About Fizz
Fizz is a special 30th Anniversary collaboration beer brewed by Oregon’s Widmer Brothers Brewing and 10 Barrel Brewing. This unique, bubbly spritzer-style ale offers bright citrus character, subtle hints of ginger spice, and is finished with champagne yeast to really make it pop. Fizz is as sparkly as it is surprising. Let those little bubbles dance.