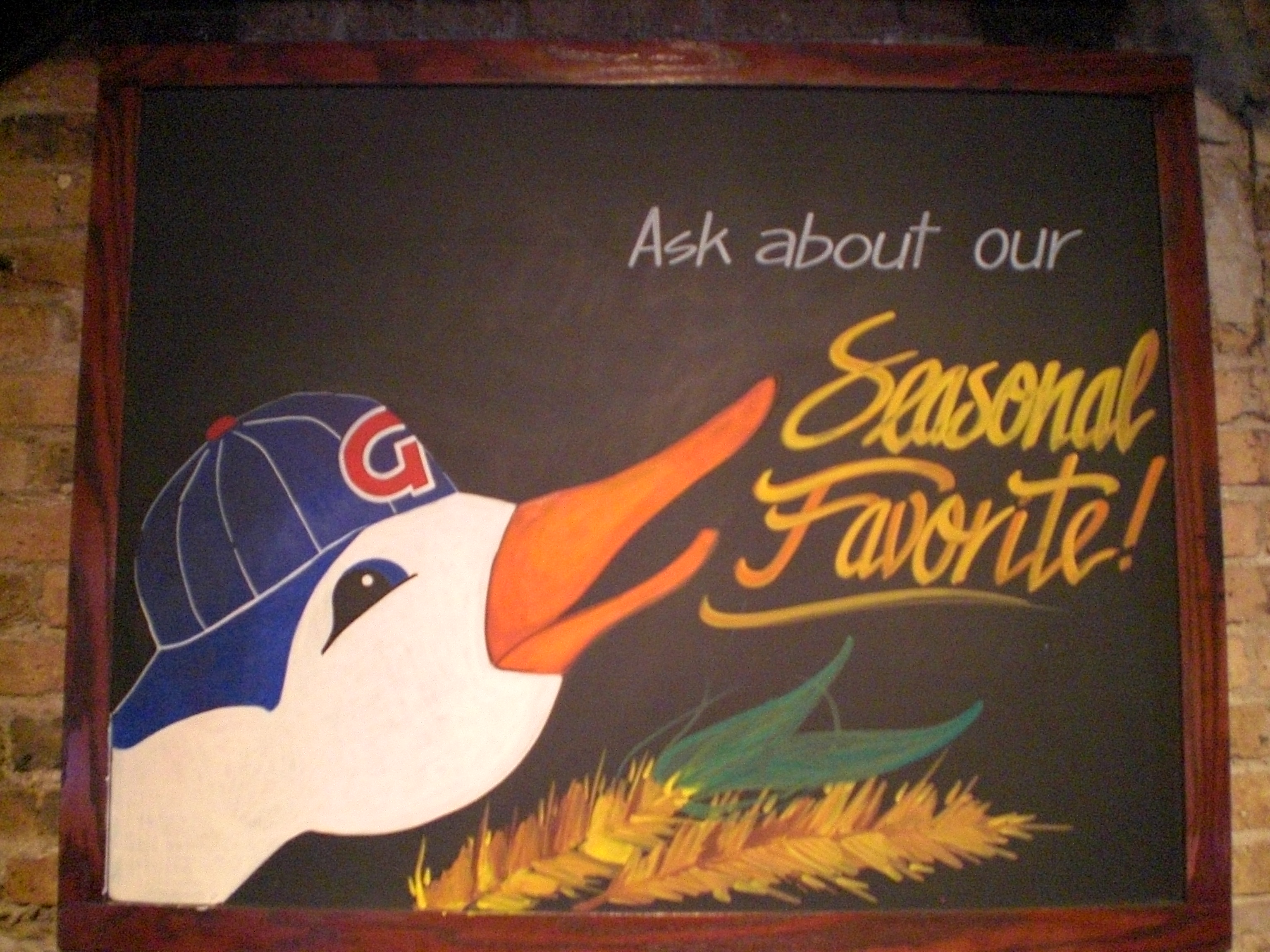 On our trip to the great Midwest, after a day of crazy thunderstorms, torrential downpours, and tornado warnings that prevented us from getting over to Michigan to partake in some much desired brews, we had one of the best days on our week-long adventure.

As a kid I was fortunate to have a father who loved baseball and took me to my first big league game when I was very young. Each year the family would head from Maine down to Boston to see the Red Sox play at the magical and historical Fenway Park. As I have grown older, I have had the opportunity to visit other ballparks around the country. Many of these modern parks named with stark, cold corporate tags like Safeco and Petco might provide more amusement to CEOs and shareholders than to a wide-eyed kid just hoping to get an autograph or snag a foul ball. 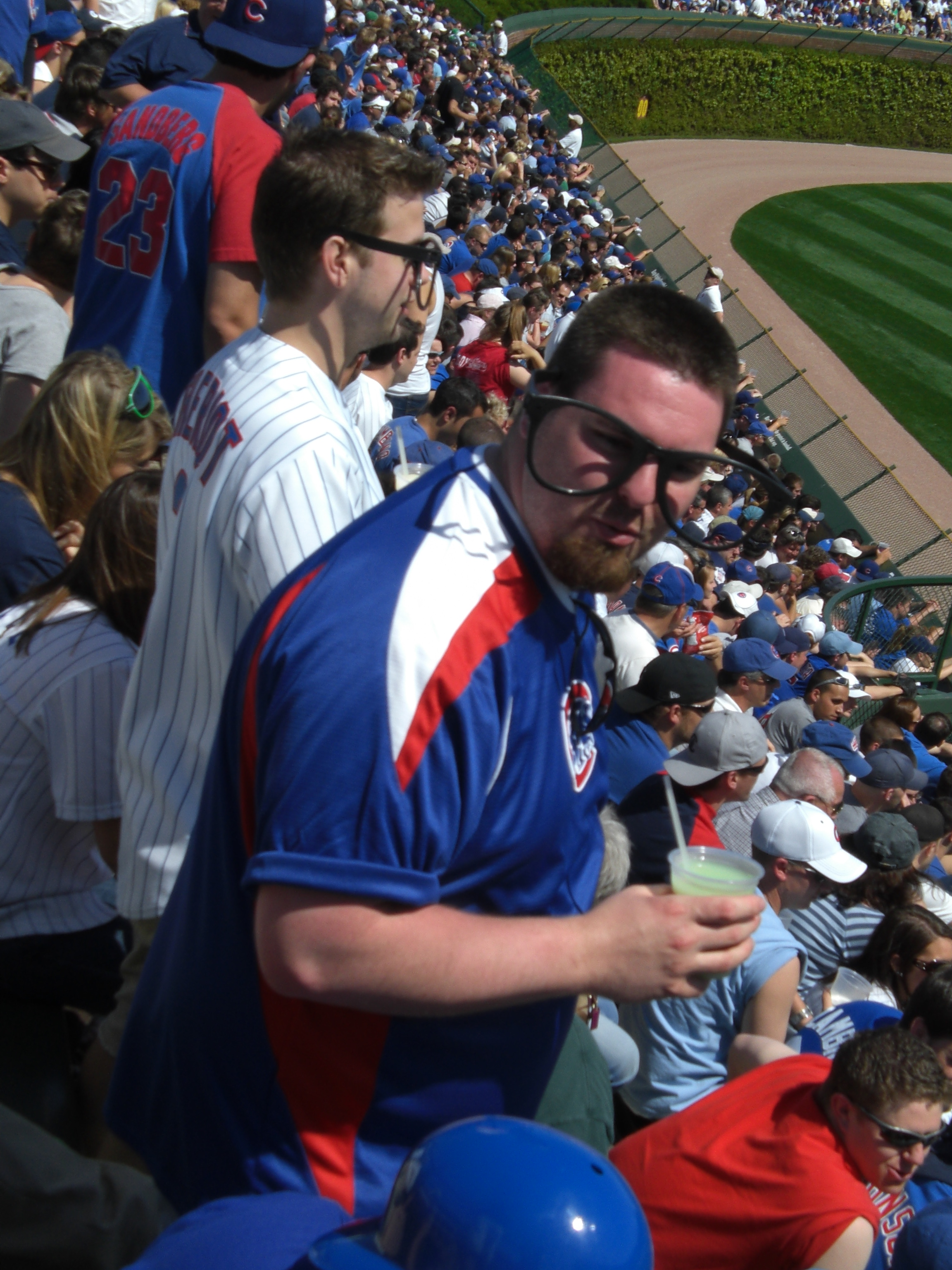 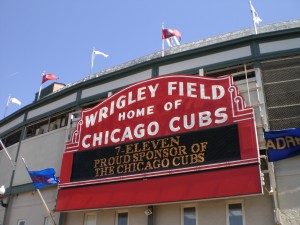 One of the last great classic American ballparks is Wrigley Field in Chicago, home of the Chicago Cubs. Named for the chewing gum magnate, William Wrigley, Jr. in the 1920s, the park built in 1914 is the second oldest major league ballpark in the country behind my beloved Fenway. With a unique intimate feel that includes a brick wall and ivy surrounding play, Wrigley is the home to some of baseball’s most passionate and dedicated fans. You see, the Cubs have not won a championship since 1908, and to have the kind of fan support they have, is just amazing. 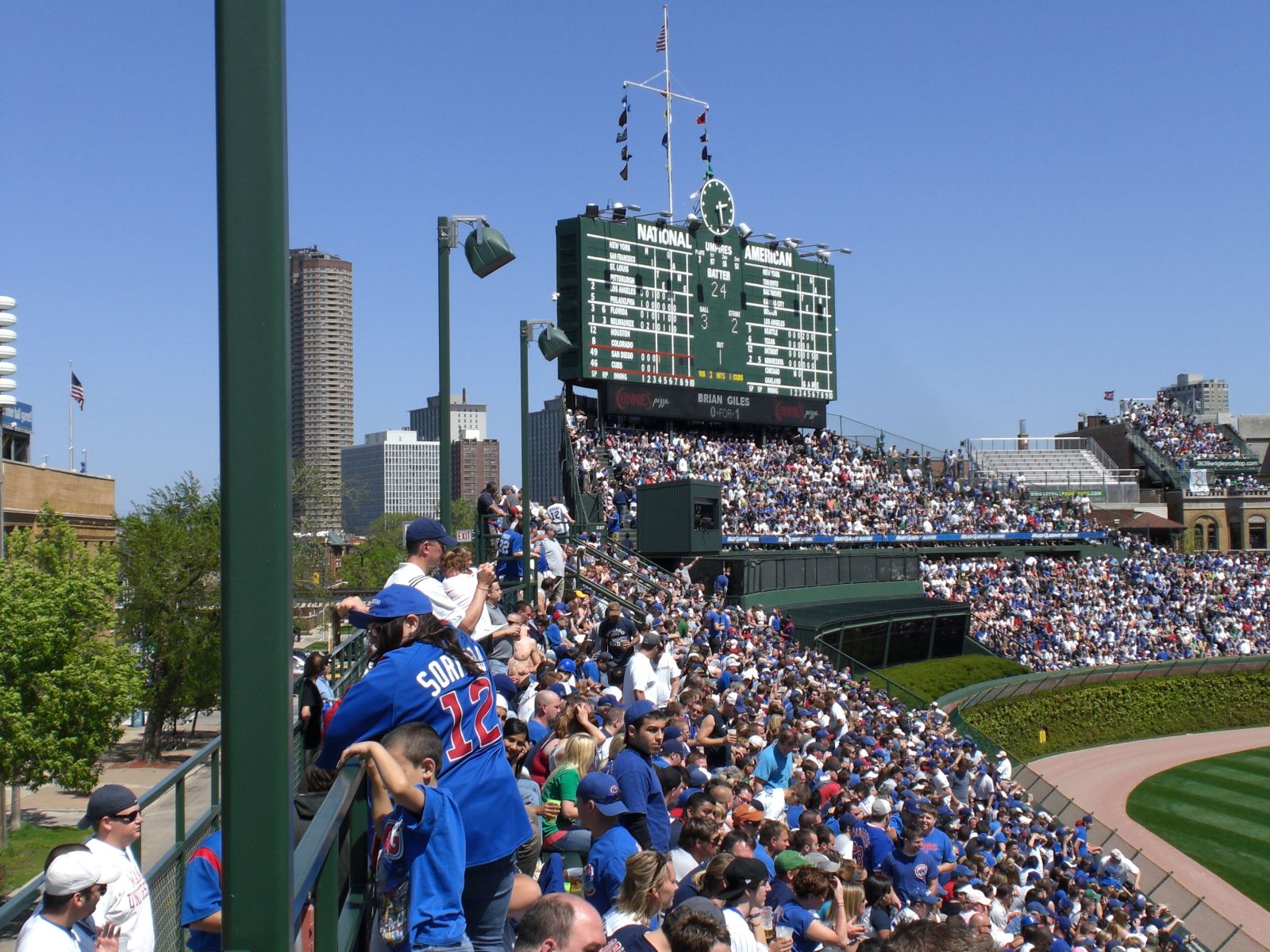 In the neighborhood known as Lakeview with surrounding restaurants and bars that make up a community often referred to as Wrigleyville. Legendary Cubs ballplayer Ernie Banks, known to many simply as “Mr. Cub”, dubbed Wrigley “The Friendly Confines.” Friendly if you’re a Cubs fan. A Century of losing will make a fan bitter in a hurry. The cool thing about Wrigley was how dedicated these fans are. Several neighboring buildings to the park featured rooftop seating to peer into the stadium. 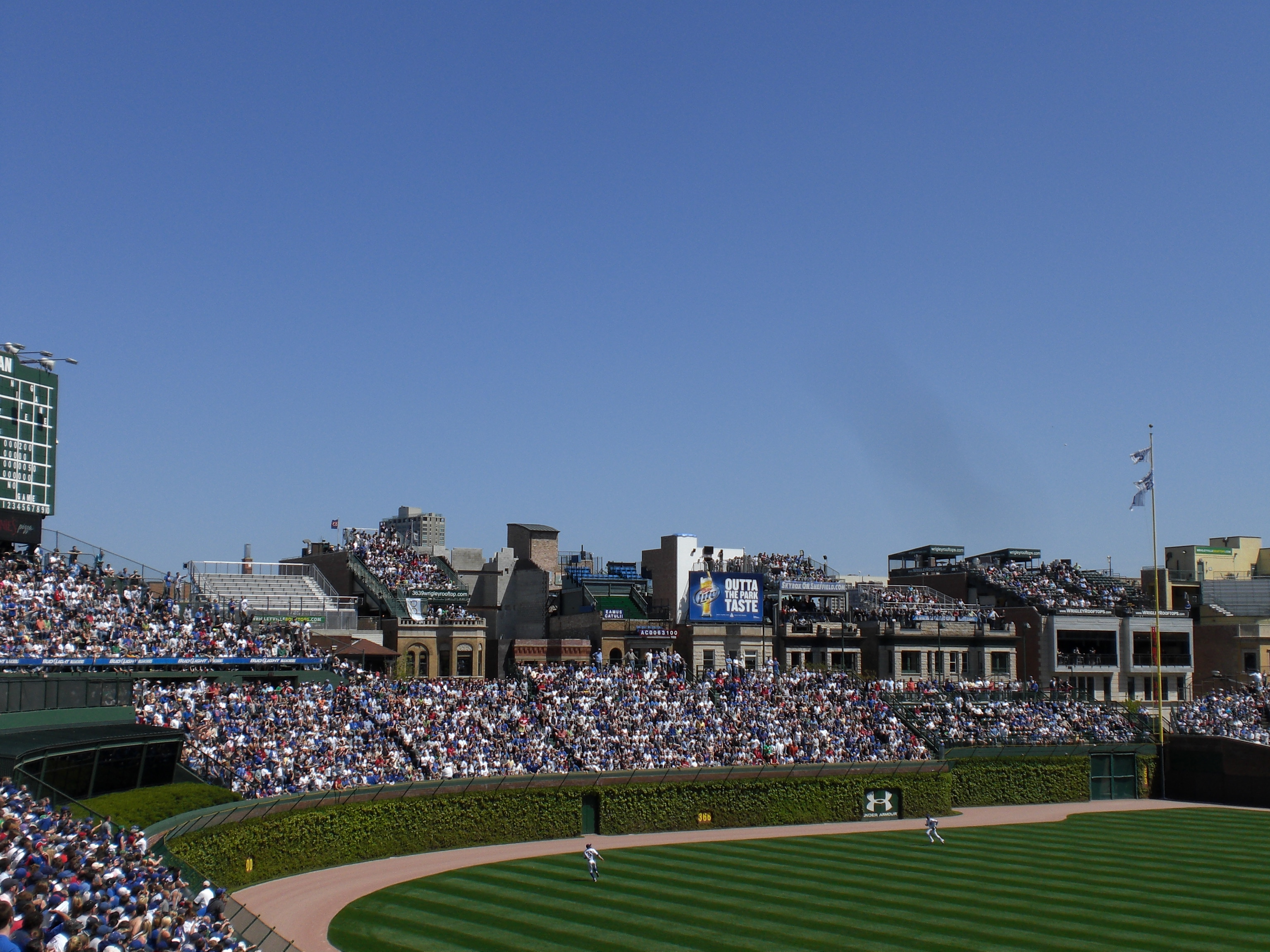 We sat in the back row of the left field bleachers on a beautifully sunny day with a light breeze blowing in from the lake. As the game progressed, Budweisered-up fans got more raucous with their chants and I even witnessed a few people get ejected from the park for throwing food, sneaking in beer, and one particular lad was nearly tossed out simply for donning a jersey of the crosstown rival, the Chicago White Sox. Luckily it was his birthday, and his buddy convinced security to let him stay. My friend Rachelle received a series of unwanted advances by a, let’s be kind and say disgusting, fellow. Luckily her husband came back to save the day and the buffoon when on to terrorizing others in the section. 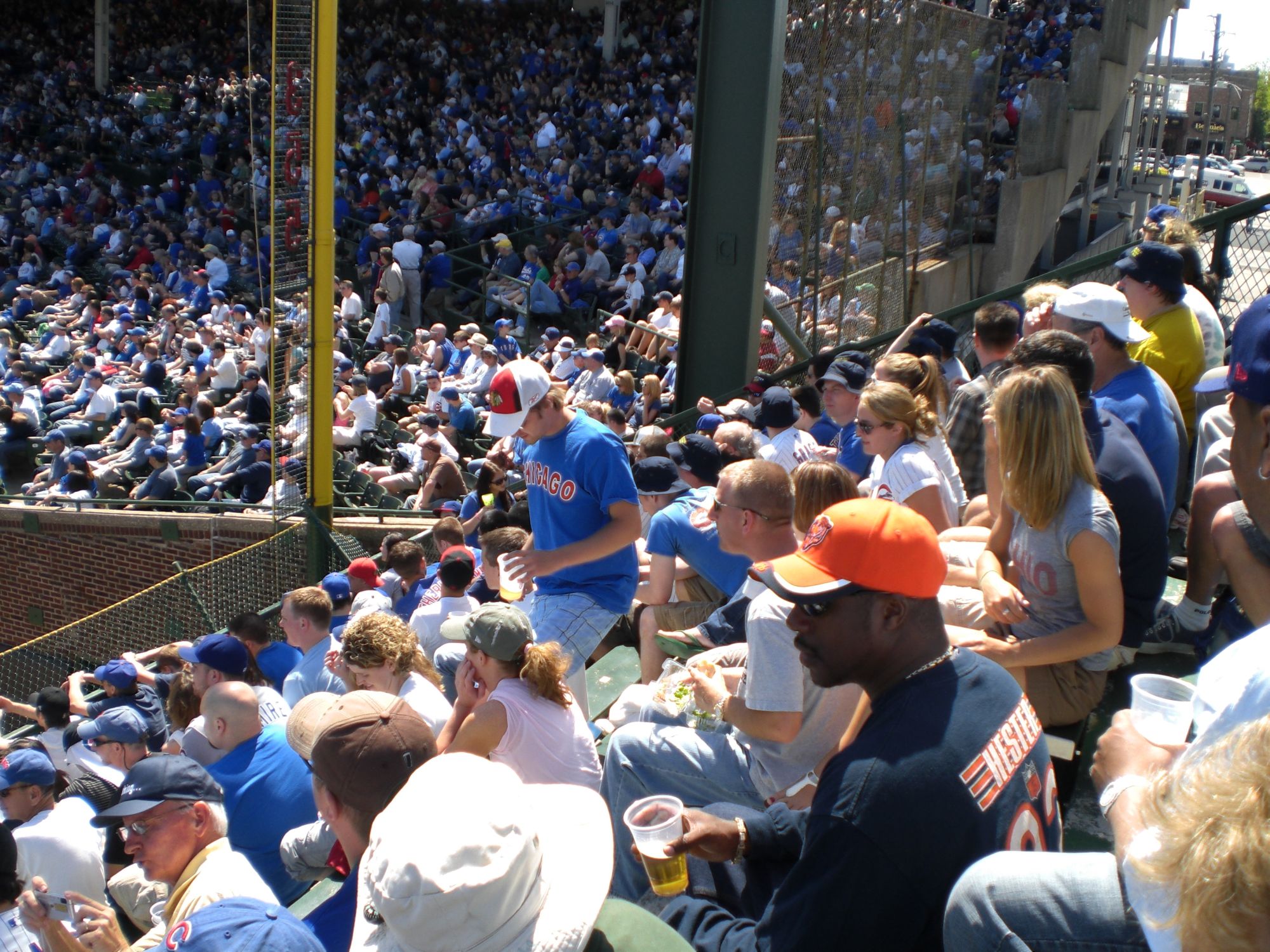 All in all, the game was a blast. I mean, put me at any major league ballpark and I am as happy as a clam (are clams really happy?). The sights, sounds, and smells surrounding Wrigley Field distracted much of my attention away from the actual baseball game taking place in front of us. The food and beer offering at Wrigley were to be desired for a craft beer lovin’ vegetarian (can anyone say pistachio overdose!), but just being at the old ballpark was an undeniable treat. 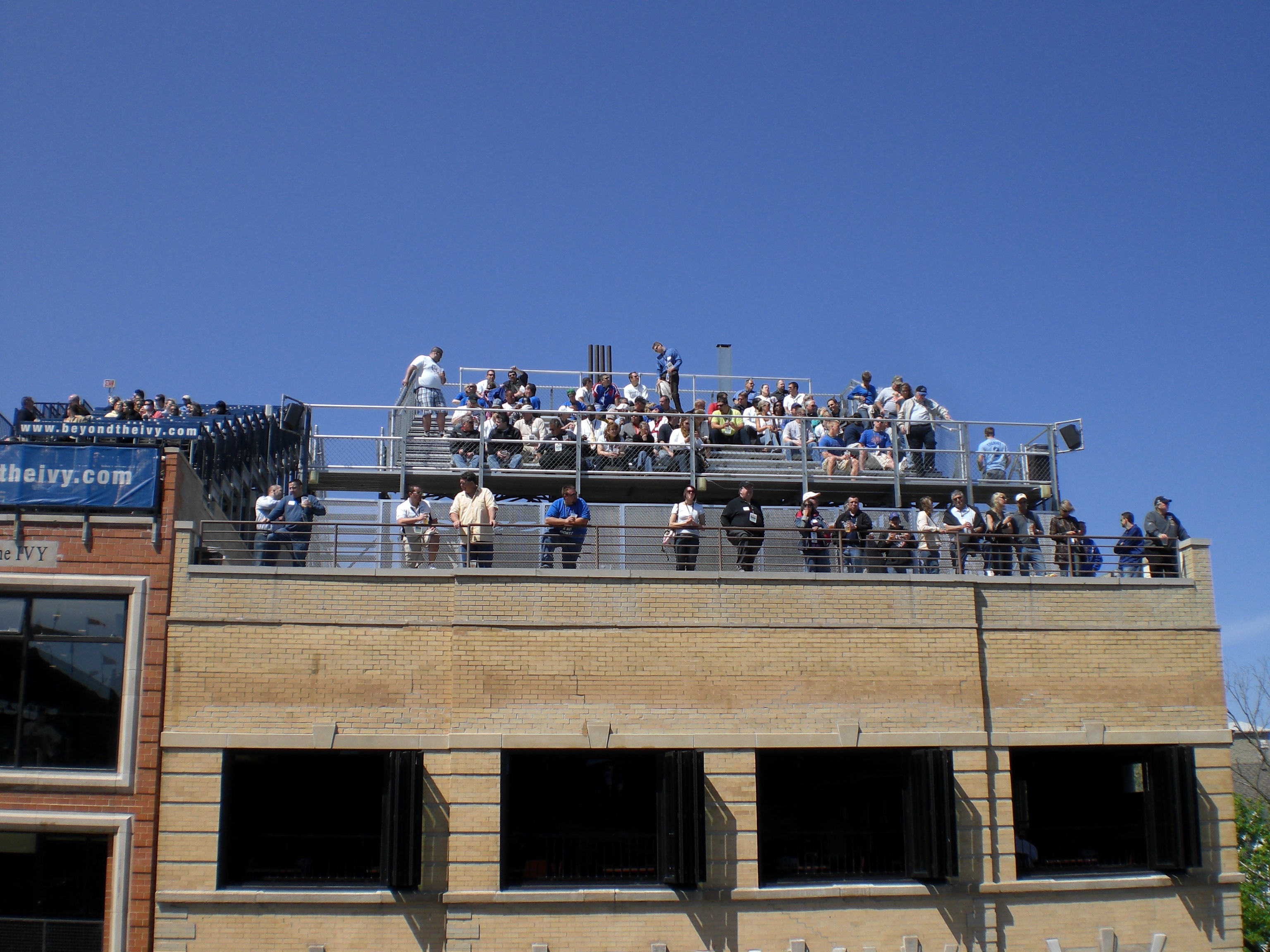 By the end of the seventh inning, the Cubs were routing the visiting Padres of San Diego by a huge margin, so, to beat the crowds, my friends and I bounced out of the

stadium to pony up a spot at Goose Island’s Wrigleyville brewpub. At Goose Island, we enjoyed wonderful brews and artisan food that really made up for what the ballgame lacked. On tap, a wonderfully spiced witbier and a floridly hopped Matilda Belgian ale hit the spot. After a half an hour or so, the joint was packed with fans from the game, and we were wise to get in when we did. The weirdest thing about Goose Island, was the bathroom steward. A man who hung out in the restroom approached you as you finished your business to offer you soap and napkins in exchange for tips. He also had an assortment of sundries for sale on the sink. I’m sorry, but when I go to the loo, I just want to be left alone. 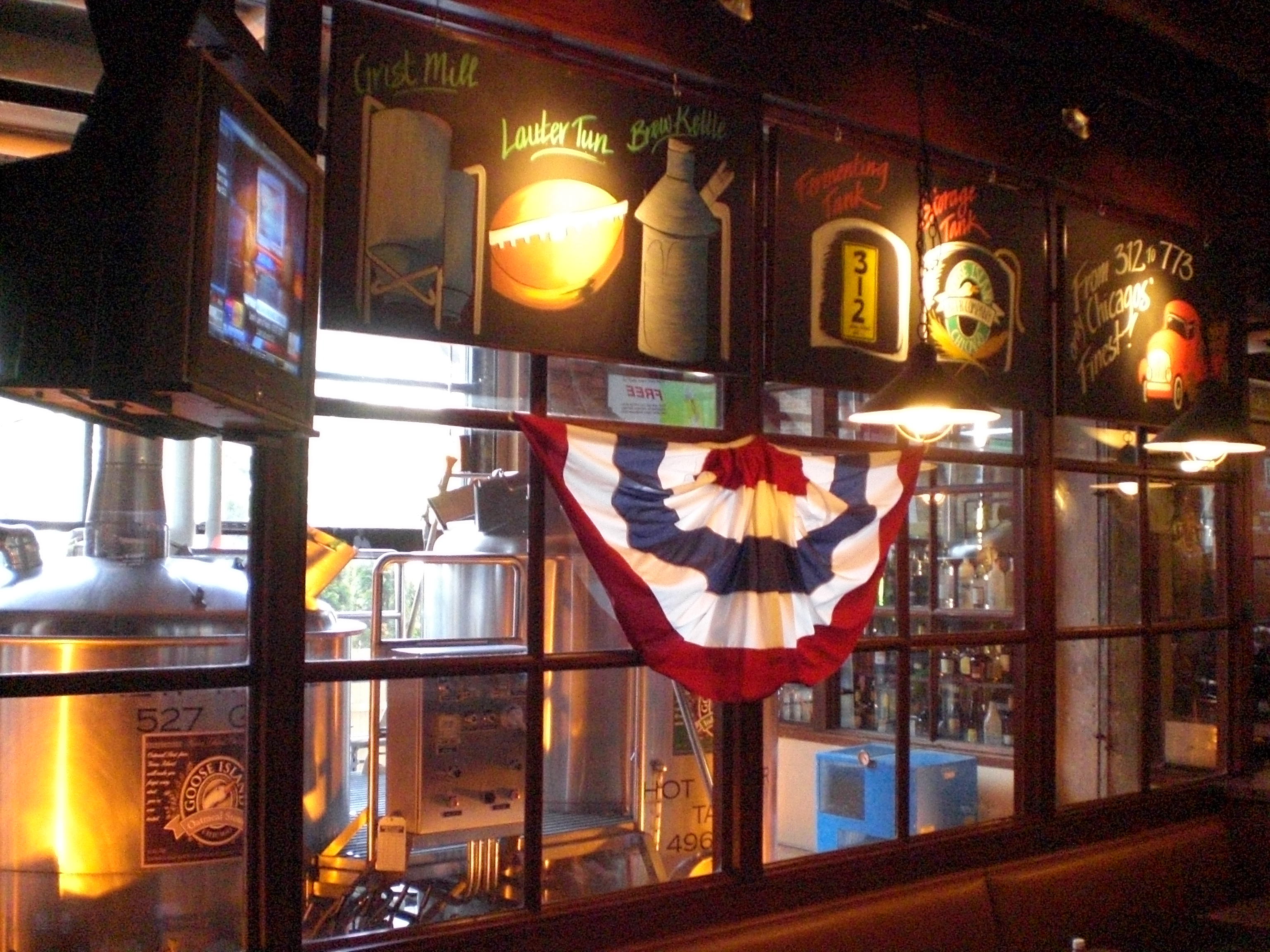 After leaving Goose Island, we walked around the ballpark looking at statues of famous ballplayers like Ernie Banks and the late great broadcaster Harry Caray. Caray is known for his saying “I’m a Cub’s fan and a Bud man.”

From the park, we walked for what like seemed to be two or three miles to another notable Chicago beer spot, the Hopleaf Bar. At the Hopleaf, an assortment of worldly libations were available including a phenomenal sele

ction of domestic craft brews and spectacular Belgian and Belgian-style ones as well. About thirty or so beers on draught in total and an eleven page book of bottled beers. One of the most impressive things about the Hopleaf was the wall of glassware. Seemed they had a glass for any beer or occasion. Per the recommendation of Belmont Station’s Cap’n Neil Yandow, I went for a draught pour of the Bosteel Kwak. Served in a unique mini-yard styled glass and accompanied by a sturdying wooden support neck, the beer, that dates back the mid 19th Century when coachmen needed a secure hold on their brew while steering their horses. After a few of these delicious beers, its easy to see yourself becoming a bona fide Kwak addict. 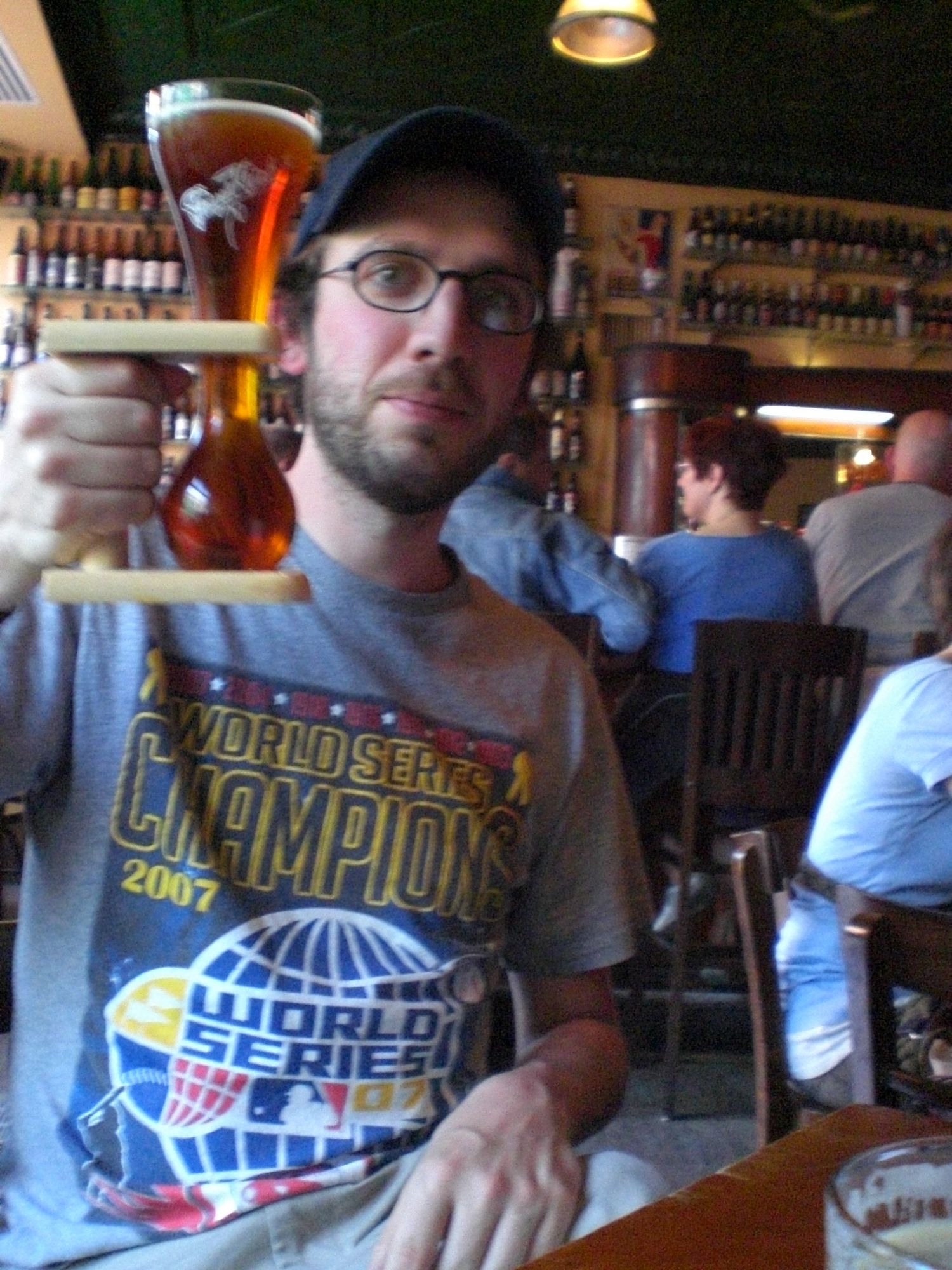 he Hopleaf was our last beer stop in ChiTown before catching the L Train back to our friends’ place in Oak Park where we were staying. We flew out of town the next morning back to Beervana with lots of beer under our belts and sunburns. We even managed to get a few cases of the good stuff safely back home. God, I love beer.