On Wednesday, June 22, Lompoc Brewing will host an eight course Brewer’s Dinner at its Sidebar location in North Portland. Lompoc Chef Mark Otey at its next-door Fifth Quadrant location will prepare the dinner. Otey teamed up with Lompoc Head Brewer Bryan Keilty, whom also has a degree in cooking from the Culinary Institute of America.

We were recently treated to a sneak peek of this dinner and was amazed by the high quality food offerings that complimented the small batch beers from Lompoc. During this preview we sampled three of the eight courses that included yellow fin ahi tuna tartare, micro green salad, and pan seared duck breast, all served with the paired beer. (All eight courses are listed towards the end of this article.)

The favorite of the three offerings was the first plate presented, Yellow Fin Ahi Tuna Tartare. This tartare was prepared uke style that is normally prepared with beef but substituting fresh tuna made this dish a winner. The Cranberry Saison complemented the dish’s spiciness and cucumber flavors. The saison is quite pleasant, as the cranberries do not overwhelm in flavor that makes for a beer that you can return to again and again.

The tuna was followed by the Micro Green Salad that was accented with a vinaigrette that was made with the paired beer, Mystical Apricorn Belgian Pale Ale. Otey sourced the micro greens from a farm in Scappoose, Oregon. The micro greens are then accented by the addition of dried fruit and pink peppercorns. Regarding the beer, Mystical Apricorn Belgian Pale Ale is another fine example of a fruit beer where the fruit flavors are there but not where it overtakes the entire beer.

A vintage pour of 2012 Black Mamba Sour Stout is the beer paired with a magnificently prepared pan seared duck breast. The duck was laid across a delicious risotto that featured dandelion greens. Named after one of the deadliest known snakes, Black Mamba is a beer that is not as lethal. “I look at their (black mamba) width and even though this beer is 4% ABV, I want people to think that this beer is deadly,” stated Keilty.

We also were able to preview a few other beers, one that will be pouring at the diner and the other at the upcoming Kriekfest in Parkdale, Oregon on Saturday, July 9. Straight Outta Hopton IPA is the sixth beer in Lompoc’s Hip Hop Series that was brewed with two Lompoc regulars, Michael and Brian. The pair asked Keilty, “What does it take for us to brew a beer for the Hip Hop series?” With a couple guys worth of free labor, Keilty and the pair built a recipe around three international hops of Wakatu, Perle, and Mandarina Bavaria. After sampling the previous five beers in the series, this one seems to be the best one yet! 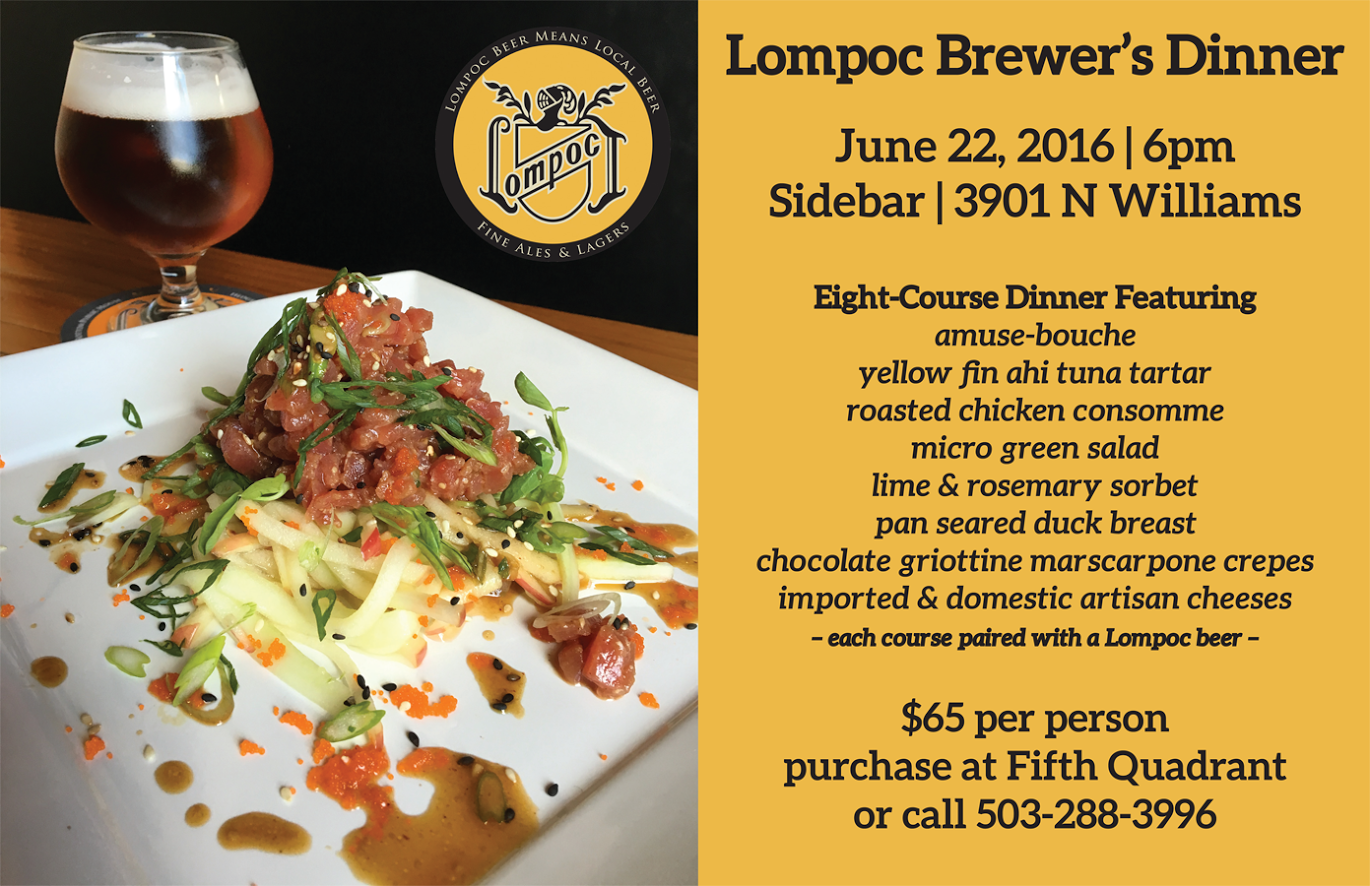 Stay up to date on the Lompoc Brewers Dinner by following its Facebook Event Page.