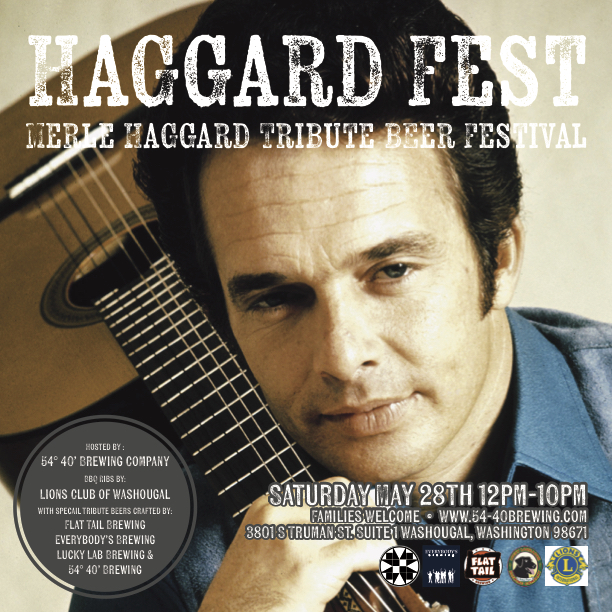 This past October Bolt Minister and Charlie Hutchins opened 54° 40′ Brewing Company on the northside of the Columbia River in Washougal, Washington, the Gateway to the Gorge. Tomorrow, Saturday, May 28, 54° 40′ Brewing will celebrate the life of Merle Haggard and his lengthy music career with Haggard Fest.

“Merle Haggard’s music has been a continual inspiration to us and we were very sad to hear about his passing on April 6th. So to pay tribute to him and celebrate his life and music we’re throwing a hell of a party,” wrote Minister. The daylong, family friendly event will feature Haggard tribute beers from Flat Tail, Everybody’s Brewing, Lucky Lab, and of course 54° 40′ Brewing.

With all of this fun filled news there’s some not so happy news as we have recently learned that Charlie has stepped down from his partnership at 54° 40′ Brewing. He has been dealing with some medical and health issues at home with his youngest child and just could not dedicate the time and effort needed in running a brewery and taking care of his son in need. Even in such sad times, Charlie still has his humor. When asked what his future in brewing holds, he replied, “I’m sure I’ll get back in as soon as makes sense. Though I am thinking about pursuing a career in modeling too.” Way to keep a positive outlook Charlie!

With Charlie stepping down from the brewery to spend the needed time with his family in March, Bolt has taken over as sole managing partner of the brewery. Even with this change of events the two longtime friends are still close. But without one of the two brewers this posed a dilemma for the new brewery.

Here comes in Josh Bitter, the tasting room manager that is better known as Badger to many in the local craft beer scene. Bolt has been training Badger to be his assistant brewer and the young apprentice recently brewed his first beer, a Belgian style IPA.

So what lies ahead for 54° 40′ Brewing? “This upcoming Saturday we’re throwing Haggard Fest, a tribute beer festival for the late great Merle Haggard. We brewed up a Pre-Prohibition Lager called Mama Tried for the event. We’re also lucky to be featuring tribute beers from Flat Tail, Everybody’s Brewing, and Lucky Lab,” wrote Bolt.

“Beer-wise we’re excited to add River Road Pilsner as one of our year-round core beers, that you can find on draft. Upcoming seasonals include a Honeydew & Cucumber beer for Portland Fruit Beer Fest, a nice chocolaty Brown Porter that will be released soon, as well as some small barrel aged projects, and our Kran-Kriek for Kriekfest in Parkdale this July.”

The beer list for Haggard Fest features beers that have been inspired by Haggard himself along with a few fan favorites.

In addition to the Haggard inspired beers, the Lions Club of Washougal will be at the brewery serving up a southern-style rib dinner from its 14′ onsite custom smoker. There will also be a cider pouring from Stevenson based Jester and Judge.

There will also be a three board corn hole tournament taking place and quite possibly some 4-Square to be played on the brewery’s recently installed 4-Square court. For the kids there will be face painting taking place. Best of all entry to Haggard Fest is free. Also make sure to check out the classic beer can collection that is on display inside the brewery’s taproom!