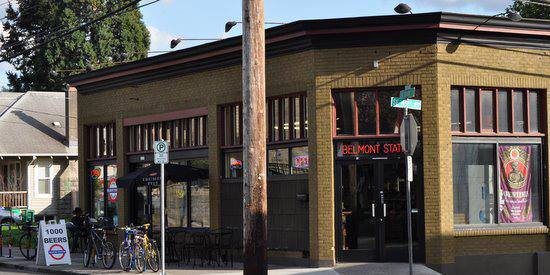 With the new trend of bottleshops opening across Portland and the country, the granddaddy of them all, Belmont Station, will be celebrating 18 years tomorrow. This is a day where the taps are chosen from each member of the staff at Belmont Station. Festivities begin on St. Patrick’s Day at 4:00pm. And to make this Anniversary even more special Belmont will be pouring its 18th Anniversary beer, Belmont Black CDA, brewed by Barley Brown’s Beer.

When Belmont Station opened its doors back in 1997 the shop was located next door to the famous Horse Brass Pub. After growing out of that spot it relocated a few blocks north to its current location. Then in 2007, Belmont Station opened its Biercafe where one can grab one of its 1200+ bottles of beer and drink it in the adjoining café. This is in addition to the 20+ rotating draft selections offered.

So for its 18th Anniversary, Belmont Station will be pouring some special beers. This is a day when Belmont’s knowledgeable staff gets to choose a beer that they would want to drink. To make it better each member gets to write the beer description that will be on the beer menu.

Then as in recent years, Belmont Station will have its own Anniversary Beer. For it’s 18th Anniversary Belmont Station recruited Barley Brown’s to brew this special beer. Just in time to turn the age for being able to vote, Tyler Brown and his crew brewed Belmont Black, a Cascadian Dark Ale. Brown, describes Belmont Black as, “A cross between Turmoil CDA and Chaos Imperial CDA with experimental hop 472 — Neomexicana. Warrior hops for bittering, Citra, Chinook, Cascade, Simcoe and Crystal.”

The Station will be tapping the first keg of Belmont Black on Tuesday. Then on Saturday, March 21st from 2:00 to 4:00pm Brown be in Portland for the bottle release for Belmont Black. Brown describes this special brew as having aromas of citrus, roast malt, and cedar/wood note. Flavor is “similar to Turmoil, but a little bigger. Some of the cedar/wood notes from Experimental Hop 427 comes pleasantly through. Bitterness is clean, and hangs out briefly before melting into a nice malty roast flavor. Lots of complexity!”

Here’s the lineup of what will be pouring during their 18th Anniversary celebration on Tuesday:

So swing by the Station and celebrate its 18 years of serving Portland some of the finest beers available. There will be no “green beer” being poured, unless it’s an organic beer. Sláinte!