We enter the Thanksgiving weekend with lots of Black Friday beer events here in the Portland area for the week beginning November 24th. 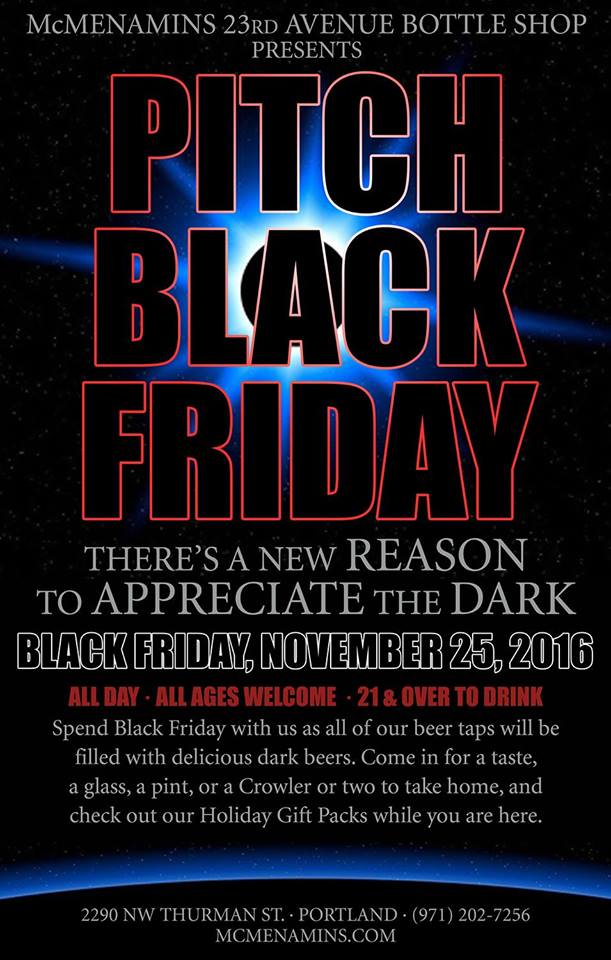 Black Friday Bourbon County Stout Sale
2 p.m. Friday Nov. 25, Belmont Station, 4500 SE Stark St.;
The bottle shop will have bottles of Goose Island Bourbon County Stout, BC Regal Rye, BCS Coffee and BC Barleywine starting Friday afternoon with a one-bottle limit of Bourbon County Stout and each variant per person, while supplies last. Also: Bourbon County Stout 2016 will be pouring on tap, as part of a special holiday draft list in the tap room.
On Cyber Monday, the spotlight shifts to Culmination Brewing and the release of their barrel-aged Multnomah County Stout, which will be available in bottles and draft. This full-bodied beer has an aroma of oak and bourbon, a mild roast flavor, notes of rich dark chocolate, bourbon and a sweet alcohol warmth.

La Trappe Quad 25th Anniversary
5-8 p.m. Friday, Nov. 25, Bazi, 1522 SE 32nd Ave.;
Join Artisanal Imports for the 25th Anniversary of La Trappe Trappist and the release of Quadrupel Oak Aged Batch #25. La Trappe is one of just nine Trappist breweries in the world allowed to carry the logo “Authentic Trappist Product” and a $15 event sampler tray will be available for purchase featuring five – 5 oz pours of La Trappe beers:
Puur: 4.7 percent is Skal certified and is brewed with green energy. That is why Father Abbot has decided to name it PUUR (which means ‘pure’ in Dutch). The organically grown hop is purchased directly from the farmers. The result is a refreshing, continuously drinkable ale that tastes of hop with a dry and light malt flavor.
Isid’or: 7.5 percent, brewed in 2009 in honor of the 125th anniversary of Onze Lieve Vrouw van Koningshoeven Abbey. The harmonious taste starts as a fruity flavor and then shifts to malty caramel; a perfect balance between complexity and simplicity. The ale is named after brother Isidorus, the first master brewer of the abbey.
Tripel: 8 percent, classic Trappist ale with a powerful and full taste. In addition, the ale has a candy-sweet and light-malty character.
Quad: 11 percent, 25 years ago, The Koningshoeven brewery brewed the first Quadrupel beer in the world. The quad is the heaviest ale with a full, warming and intensive taste; malty with the sweet tones of dates and caramel.
Oak-Aged Quad Batch #25: 11 percent, In 2009, an old tradition was reinstated by aging La Trappe Quadrupel in oak barrels, thus creating a unique Trappist ale with a perfectly balanced flavor, and special aroma of wood. The complex taste depends on the type of barrel in which it is aged and therefore, each batch is different.

“My Beer Year” Book Signing
3-5 p.m. Sunday Nov. 27, Wayfinder Beer, 304 SE Second Ave.;
Portland author Lucy Burningham says her new book “My Beer Year” makes a great gift for all the beer-loving and beer-curious people in your life. She’ll have copies available for sale (cash or card is fine) and will be glad to sign them Sunday.

Zenger Farm Fundraiser
Tuesday Nov. 29 The BeerMongers, 1125 SE Division St.;
Join the Mongers for a kickoff to the giving season that includes special tasty beers both on tap and in the coolers, raffle prizes and a cribbage tournament with prizes for the winner. The BeerMongers will be donating a portion of the day’s sales to Zenger Farm, a working urban farm that models, promotes and educates about sustainable food systems, environmental stewardship, community development and access to good food for all.

Lompoc Brewing Holiday Beer Extravaganza
4-11 p.m. Tuesday Nov. 29, Sidebar, 3901 N Williams Ave, 21 & older. Holiday beers will be on tap at other Lompoc pubs on Nov. 30.
The Lompoc crew loves the holidays, which is why this year’s annual holiday release lineup includes seven winter beers:
Blitzen: A bright straw-colored holiday favorite dry hopped with Mandarina Bavaria hops, orange peel and cinnamon. The hops and orange peel combine for a citrusy aroma and flavor while the cinnamon gives a slight spice at the back end. 4.6 percent
Jolly Bock: A lager brewed with a generous amount of Munich malt to develop the deep amber color and rich malt flavor. The malty flavor is balanced with a spicy hop bitterness. 7.3 percent
8 Malty Nights: A Chocolate Rye beer featuring a roasted chocolate flavor and a sweet finish. It is dark brown in color and lightly hopped with English style hops. Raise a glass and toast, L’chaim, to Porltand’s first Hanukkah seasonal. 6.5 percent
C-Sons Greetings: A deep copper-colored imperial IPA brewed and dry-hopped with all seven “C” hops for a piney, citrusy, floral and resinous aroma. Offers a full hop flavor with a rich caramel malt finish and an endless developing hop presence. 8 percent
2013 Old Tavern Rat: A dark amber-colored barleywine that was aged for two years prior to its release. It has a strong bitterness that is balanced with the sweetness of caramel and toffee flavors. 9.4 percent
Cherry Christmas: This hazy Belgian-style farmhouse ale is slightly pink in color coming from the addition of tart cherries added at the end of fermentation. It is dry and crisp, with plenty of fruitiness complemented by a spicy bitterness. 6.5 percent
Brewdolph’s Revenge: A Belgian-style red ale aged in Bourbon barrels on sour cherries for nine months. 6.5 percent.