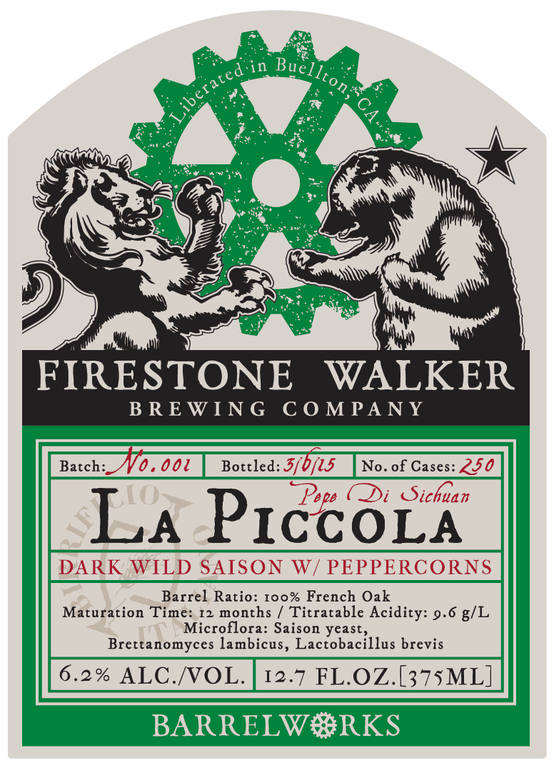 With only a little over week to go for the Firestone Walker Invitational Beer Festival, the brewery has just revealed its festival’s collaborative beer. After last year’s highly sought after collaboration with Three Floyds, this year Firestone Walker has gone cross-continental and teamed up with Birrificio Italiano from Italy for La Piccola. This collaboration will be released on May 30th at both Firestone Walker’s brewery in Paso Robles, CA and its Barrelworks in Buellton, CA.

The West Coast’s premiere beer festival, Firestone Walker Invitational Beer Festival is becoming the hottest ticket to acquire. Now in its 4th year, the FWIBF features some of the best breweries from the United States and beyond. Its at this fest that attendees will be the first to sample La Piccola, a beer that came together from Agostino Arioli of Birrificio Italiano and Matt Brynildson of Firestone Walker Brewing Company.

“With most collaborations, you start the beer together at one brewery, and it gets finished there, resulting in one beer,” Brynildson said. “Agostino and I decided to do something different. We sat down and designed the recipe together, then went back to our respective breweries to brew them on our own. We’ve been emailing back and forth for a year now, trying to replicate what the other was doing.”

It all started at last year’s beer fest, when Arioli and Brynildson hatched their plan to brew a dark saison that would be made with debittered black malt, then soured via secondary fermentation and aged in barrels—and also spiced up with an unlikely twist.

“Like many Italians, Agostino is a true gourmet, and he takes a chef’s approach to brewing,” Brynildson said. “He’s really into exotic spices and he wanted to play around with these Sichuan peppercorns, which are really weird and unique. We had to contact a spice hunter in Italy to get our hands on them.”

After Brynildson brewed his base version of La Piccola, he sent it down to barrelmeisters Jeffers Richardson and Jim Crooks at Firestone Walker’s Barrelworks wild ale facility, where they initiated secondary fermentation and maturation for 12 months in French oak barrels.

In the end, they decided to create one version with the peppercorns (La Piccola Pepe Di Sichuan) and one without (La Piccola Virtuosa). Meanwhile, Arioli is finishing up his own La Piccola made with the peppercorns. All three beers will be first presented at the Firestone Walker Invitational Beer Fest on May 30 in Paso Robles. Bottles of the California-brewed beers are limited to 250 cases each, and two-packs will be available for purchase at the Paso Robles brewery and Barrelworks in Buellton starting at 3 p.m. on May 30.

The base beer was brewed with the same Belgian yeast used to make Firestone Walker’s Opal saison, giving it classic fruit and spice notes. The debittered black malt provided dark color without assertive bitterness. The souring and barrel aging layered in just the right amount of earthy funk. And the peppercorn version presents its own distinctive qualities.

“The Sichuan peppercorns are pretty intense,” Brynildson said. “If you pop one in your mouth, your face goes numb. In the beer, it adds black pepper and lemon zest notes, and it also gives this subtle tingle on the tongue.”

He added, “I can’t wait to try Agostino’s version. It will be fascinating to compare and contrast the final results between the same beer made separately in California and Italy.