A busy, beery week ahead with Fort George’s Mega Tap Takeover at Loyal Legion plus the rest of the beer events for the week of April 13th.

Fort George Mega Tap Takeover
6 p.m. Thursday April 13 – Sunday April 16, Loyal Legion, 710 SE Sixth Ave.;
Fort George Brewery will be at Loyal Legion with the biggest tap takeover they have ever had — just look at that list — three pages! More than 30 taps will be pouring great Fort George beer through the weekend and there’ll be special guests and giveaways on Thursday for the kick off, as well as some rare and hard to find Fort George beers pouring until they’re gone… 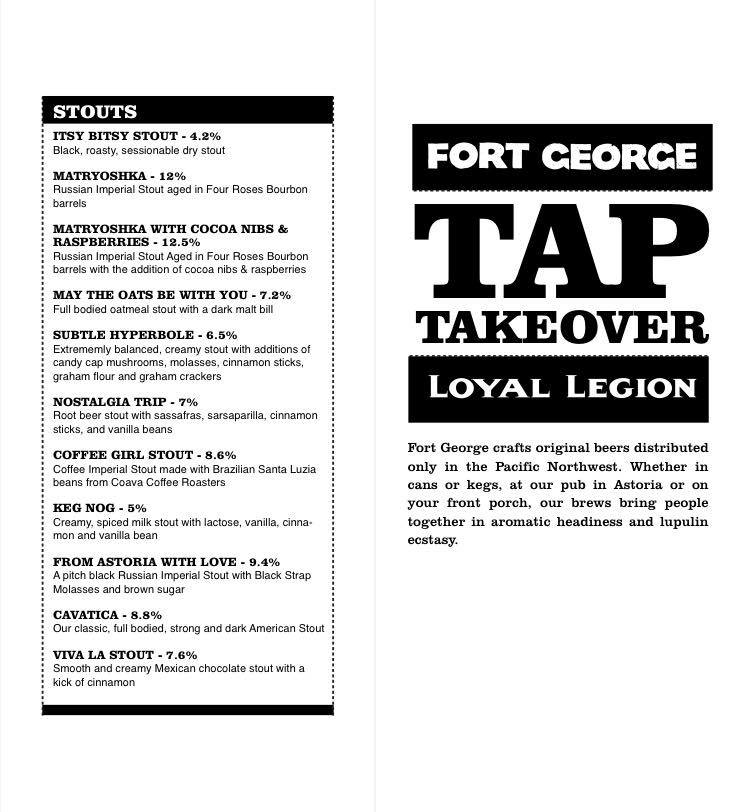 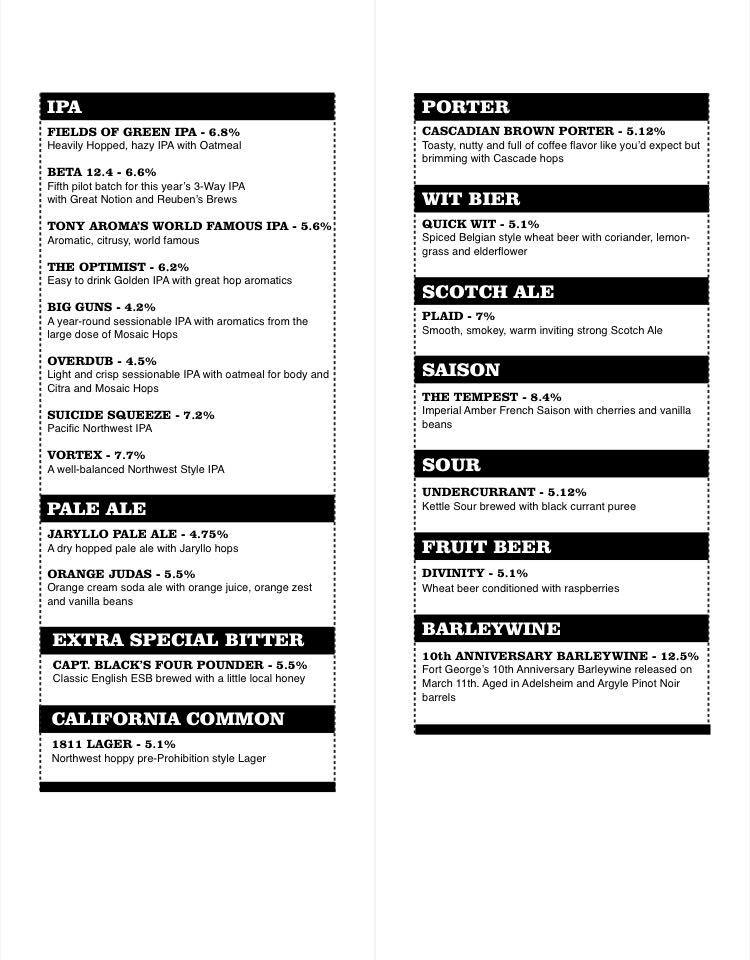 Sanctuary IPA Release Party
5-7 p.m. Friday April 14, HOTLIPS Pizza Hollywood, 4630 NE Sandy Blvd.;
HOTLIPS Pizza and Coalition Brewing honor Portland’s status as a sanctuary city with Sanctuary IPA, a unique beer created using hops from all over the world and demonstrating in a beery sort of way that we are stronger together and that the whole is more than the sum of its parts: Domestic nugget hops provide a crisp and clean bitterness. Equinox hops provide notes of tropical fruit, while Japanese Sorachi Ace hops lend a subtle spiciness and citrus notes. Finally, European Mandarina Bavaria hops provide citrus and grassy notes which intermingle to make a cohesive and highly drinkable whole. 5.5 percent, 60 IBU. Proceeds of beer sales go to the Oregon Chapter of the ACLU. The beer will be available at HOTLIPS locations and selected taprooms for a limited time only.

The Besties celebration happens Monday and brings the crews of the recent Oregon Beer Awards Small, Medium, & Large Breweries of the year (Baerlic, The Commons, and Breakside respectively) and some of their best drafts to the Best Beer Bar and Bottleshop Winner – i.e. Belmont Station…

Ordnance Can Release Party
6-8 p.m. Friday April 14, McMenamins 23rd Ave. Bottle Shop, 2290 NW Thurman St.;
Ordnance Brewing from Boardman is releasing cans of their EOD IPA and Bloops Blueberry Wheat and here’s yer chance to taste the beers and ome grab an Ordnance can for there, or six to go.

Bloops Blueberry Wheat
Brewed with blueberries from  local farms, Bloops is a balanced Wheat Beer with just enough blueberry aroma and flavor to provide something delicious without being sweet and overly fruity. Now available all year. 4.6 percent.

EOD IPA
Ordnance’s take on a West Coast IPA with generous additions of classic hops, including Mt. Hood and Columbus, at every step in the brewing process. Flavor rangesa from a light fruity sweetness to rich floral tones.7.8 percent, 80 IBU

Seventh Annual Samuel Smith Salute
Here’s what the Merchant du Vin website has to say: Remember – or imagine – what beer drinking was like in America in 1978, before the first Samuel Smith’s shipment arrived. There were about 85 breweries in the US and only one was a craft brewery. Imports were few, and Almost all were pale lagers. Today, the American beer scene is the most dynamic on the planet.

Each year, many great beer spots salute Samuel Smith with promotions, tastings, special prices, and a chance to celebrate: the annual Samuel Smith Salute. Please join in: savor the benchmark beers from Samuel Smith’s, and recall the prominent role this iconic British brewery has played in the US craft beer revolution and raise a glass to Samuel Smith handcrafted ales & lagers – Brewed Since 1758 – Imported since 1978.

Deliria Beer Release & Egg Hunt Party
2-8 p.m. Sunday April 16, Bazi, 1522 SE 32nd Ave.;
Celebrates the 2017 vintage release of Deliria – brewed once a year by women to commemorate International Women’s Day. This year also marked the 5th celebration of “Ladies Day” and for the first time ever, Huyghe Brewery expanded its invitation outside of the European nations and two women from the United States were selected, including Bazi’s own Hilda Stevens.

Deliria is an 8.5 percent, brewed once a year to mark International Women’s Day. A pleasant sparkling carbonate content produces a soft, full taste perception. The aroma is very balanced with a fruity, flowery background and initial Chardonnay impression, which evolves into a spicy, mild aroma of hops. The taste is very full-bodied and is balanced with fruity tones of apple and Chardonnay grapes.

Because the official release of Deliria falls on Easter Sunday, Bazi will be hosting an Egg Hunt at 4 PM with lots of Pink Elephant swag.

Vintage Bottle Sale/Abnormal Beer Co./Cribbage Night
Tuesday April 18, The BeerMongers, 1125 SE Division St,;
One of the favorite events of the beer year is when Sean and the Mongers unearth some rare bottles from the beer vault. They’ll be on sale Tuesday, plus the evening’s meet-the-brewery event features San Diego’s Abnormal Beer Co., billed as the first official brewery/winery/fine dining restaurant. According to the website, that locus allows for a lot of creativity and cross-fertilization, and the tap list bears that out. But wait, there’s more: cribbage night, which is growing into a weekly Portland pub favorite.

Here are some of the featured Abnormal beers:
Year Two IIPA-West Coast Style Double IPA
Seven pounds of hops per barrel: that’s a lot, but then, this is their anniversary beer. Hops include Eureka, Zythos, Centennial, Simcoe and daho 7…

Mole Cuddles-Spiced Imperial Stout
Mole Cuddles is an adjusted recipe of the Imperial Stout with Ancho Chilies, Cinnamon, Piloncillo (Mexican Brown Sugar), Cacao Nibs, and Vanilla. It’s a big beer that has a cinnamon/ancho spice that is not overpowering but has a complimentary lingering spice flavor.

Turbidity (batch 1)-Hazy Double IPA
This is the double IPA version of New Money IPA which rotates the hops with each batch. Turbidity will have 50% more dry hops than New Money. Hops include Nugget, Centennial, Mosaic and Idaho 7.

Full Sail’s New Cans:
Look for Full Sail Exit 63 on grocers’ shelves now, Full Sail’s first cans if you don’t count the recently released Session cans. . Golden blonde in the glass and smooth on the palate, this ale evokes the brighter and warmer days of summer. Subtle notes of spice and a light body define this easy-drinking beer.“Exit 63 is a celebration of this place we call home,” says Full Sail Brewmaster Jim Kelter. “From our brewery just off Exit 63, comes this easy drinking Blonde Ale brewed with pale rye malt, Northwest grown barley, and Cascade, Mt. Hood, and Glacier hops.”