Fresh hop season is upon us once again:

I first wrote about fresh hop beers in 1998, when Bert Grant made one of the first fresh hop ales in the country. Since then, Oregon and Washington brewers have embraced fresh hop beers and given the world a new beer style, and fresh hop season is upon us, beginning with last week’s backyard hop harvest at the Lucky Labrador. There are several fresh hop fests on the calendar including a couple in the next week or two:

And the newest entry on the Fresh Hop Fest calendar, sponsored by Portland Beer Week and my friends at Burnside Brewing:

Fresh Hop Pop-Up Beer Fest
11 a.m. – 8 p.m. Sept. 20 – Sept. 24, Burnside Brewing Co., 701 E. Burnside; Free Entrance. $5 Pints, $3 half Pints. All-Ages. Cash is best; ATM onsite.
The event features an outdoor beer garden, sunny and shaded seating and a rotating daily selection of the finest and freshest hop harvest beers of the season from some of the regions best breweries – eight taps devoted to the latest, dankest fresh hop releases, plus Oktoberfest style street food options in an all-ages environment. Each day will feature at least one brewery tapping this year’s fresh hop beers, so there will be something new and exciting every day starting Tuesday, Sept. 20 with Seattle’s Fremont Brewing. And the fest brings us a new twist on fresh hop beer: Hop-Shine fresh hop oil. “Upgrade your beers for a buck a pint to get a huge aroma and flavor boost — even to already flavorful beers.  Hop-Shine is not like the other extracts and uses no alcohol but does capture the real whole hop, fresh hop flavor and aroma using new techniques. Hop-Shine can freshen up a beer without the beer loosing its intended character – a perfect fun new complement to the Fresh Hop Pop-Up Fest.”

54-40 Fresh Hop Pale Ale Release
5- 8 p.m. Thursday Sept. 8, McMenamins 23rd Ave. Bottle Shop, 2290 N.W. Thurman St.;
54-40’s Bolt Minister is one of my favorite brewers and he’s just brewed Broken Record IPA, the first of three fresh hop beers the brewery plans to release in 2016: “Crafted with sessionability in mind, this drinking IPA does not disappoint. Premium pale malts are balanced with Northwest grown Cascade, Centennial, and Azacca Hops, giving this Session Pale a big, fruity, floral nose and pleasant hoppy finish. At 5.0% ABV, this is an IPA you can stick with all day and night.”

54-40’s Kascadia Kölsch will also be featured: “A simple and perfect beer. Our Kölsch-style Ale is brewed to bring together veteran craft-drinkers and first time craft-drinkers alike. Traditional imported Pilsner Malt and a classic German Yeast strain create a remarkably crisp and easy-drinking beer that begs to be shared with friends.” 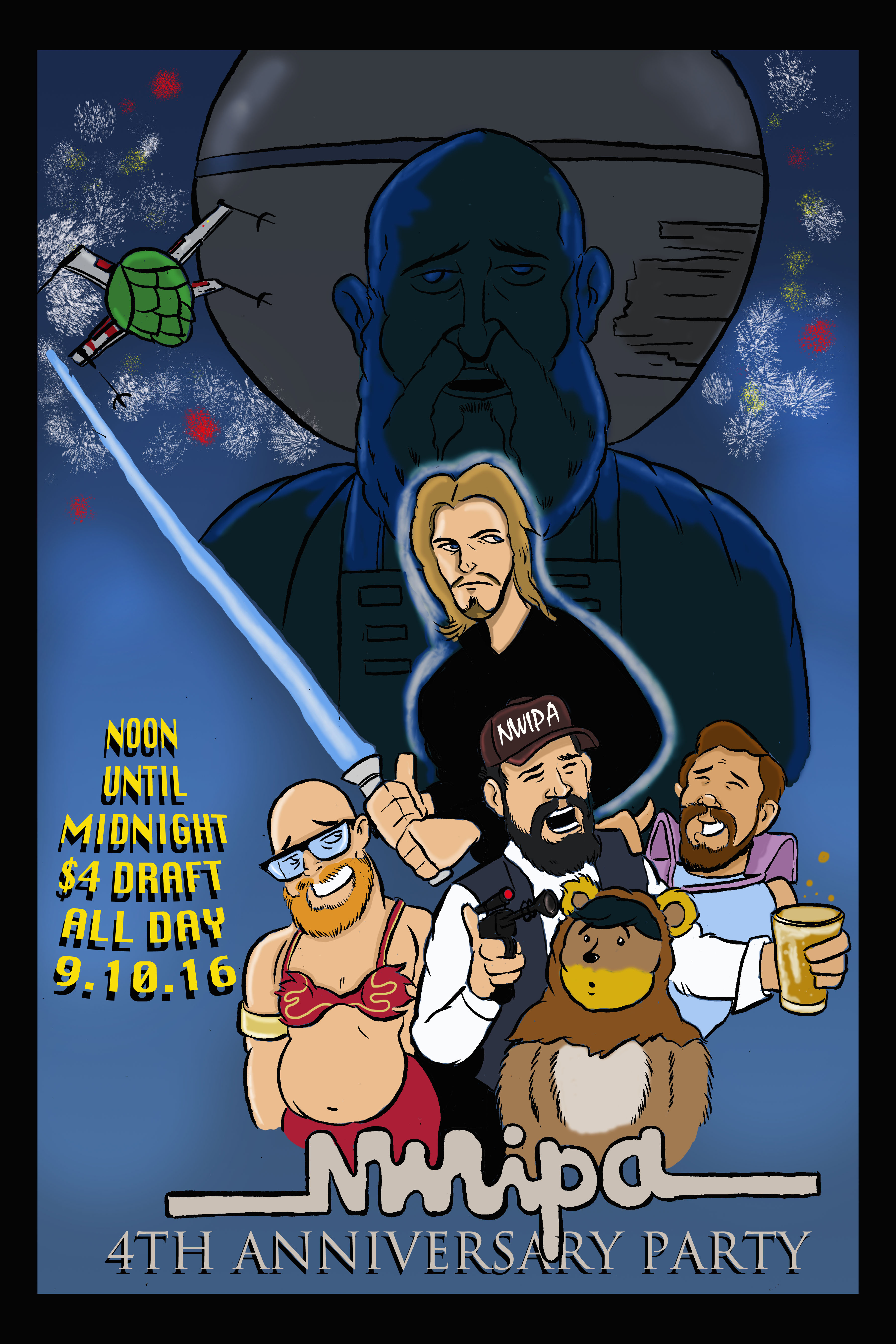 Here’s something I wrote about the hop harvest several years ago:

A stroll among the rows of 20-foot-tall vines in a hopyard, where dim light filters through greenery as if through stained glass, is like walking in a cathedral –an apt enough comparison, given that Oregon brewers regard the bounty of Northwest hop farms with nothing short of reverence.

“Of all the things I love about brewing, hop selection is my favorite,” says Matt Swihart, co-owner and brewer at Hood River’s highly regarded Double Mountain Brewery & Taproom. Swihart and hop farmer Doug Weathers walked the rows of one of Weathers’ hopyards, gauging the plumpness of the ripening cones. After the hops are harvested, dried and baled –a monthlong flurry of ’round-the-clock labor –brewers visit hop brokers to make their choices.

“You use all your senses,” Swihart says. “You look at the cones, smell them, crush them between your fingers and try to get into a zone where the characteristics of the hops suggest different beers. You want to be open to the story the hops are telling.

“The idea for our Pilsner popped into my head when I was looking at Perle and Sterling hops. Their peppery, minty aroma reminded me of a beer I’d had, and I realized they’d be perfect for brewing a Pilsner.”

The Northwest: Hop Heaven
But any brewer can meditate upon dried, baled hops. Northwest brewers such as Swihart have the advantage of being mere hours away from one of the world’s major growing areas in the Willamette Valley and Yakima. In late September, they can –and do –fill their car trunks or pickup beds with just-picked hops to make once-a-year fresh hop beers for the harvest season.

“We are unique in the U.S.,” said Brian Butenschoen of the brewers guild, “that we partner with the state’s tourism commission to promote a unique, local, fresh and seasonal beer. We are also unique in the U.S. that within about 100 miles of the hop fields we have 80 breweries that can make fresh-hop beers. I don’t think there is a greater concentration of breweries within a 100-mile radius in the country.”

Celebrating cannabis’ cousin
Most hops are dried and baled after picking; some are frozen; some are pressed into pellets; some are distilled into essential oils. But fresh-from-the-vine hops are a fleeting thing available only during the hop harvest, and brewers are taking full advantage with a round of beers and parties and farm tours, all to celebrate dear old Humulus Lupulus.

“It is an exciting time, because the harvest reconnects us with the farmers and the agricultural roots of our beer,” said Full Sail brewmaster John Harris. (Now the owner of Ecliptic Brewing, of course.) “We love hops especially because they’re our spice. Malt is the base, our stock, but hops are what makes a beer come alive.”

Still, it seems a curious object of veneration, this sticky, aromatic, weed like cousin of cannabis that grows inches a day during high summer. Its leafy, thumb-size cones are used for almost nothing but to preserve beer and give it bitterness, tasks for which they are uncannily perfect –far better than the witches’ brews of herbs and spices brewers used in the centuries before hops became the standard.

Without hops, beer would be a sweet, grainy gruel where bad bugs thrived. Without hops –and the thousands of variations of flavor and aroma that derive from different varieties, and when and how they are used in the brewing process –brewers would have far fewer outlets for their creativity.

And that creativity reaches its most feverish pitch during the hop harvest.

That fresh-hop mojo
“It’s like the vintners racing to get out the Beaujolais nouveau,” said BridgePort brewmaster Karl Ockert, (now at Deschutes Brewery) who’s more than once driven back to his brewery with a trunk load of fresh hops. “They’re using mostly whole grapes, which is almost exactly what we’re doing when we use the whole hop cone and extract some of the flavors and oils that can be lost in normal processing.”

Hops were once a commodity grown only for their ability to add bitterness to beer. But ever-increasing demand from craft brewers for more subtle aroma hops, and Oregon State University’s ongoing research, mean that Oregon farmers now grow a dozen or more varieties and supply much of the aroma hops used by U.S. craft brewers. Hops are no longer a commodity, and craft brewers now make varietal beers that use a single variety of hop instead of the several commonly used.

Beyond bitterness
Although hops add bitterness to beer, many fresh-hop beers are more about fleeting nuances of flavor than overbearing bitterness. “I don’t want anything overpowering, especially bitterness,” said brewer Van Havig, the regional director of brewing for Rock Bottom breweries.(back when I wrote this; he’s now co-owner of Gigantic Brewing)  “I try to make a delicate beer –I keep the malt profile simple and I don’t make big beers, either, because I don’t want a lot alcohol to get in the way of the flavor. I think of them as ephemeral beers, because the hops have their brightest character, the most volatile oils when they’re fresh. It’s hard to describe, but it’s the same as eating a tomato ripe from the vine and one from the supermarket.”

Those volatile aroma and flavor compounds quickly sublimate, said Havig. In other words, the biological clock is ticking. “When should you drink these beers? The instant that they’re put on tap,” he said, “because the volatile compounds are already dissipating. Come back in a week and you’ll find a very different beer.”