First brewed 35 years ago in 1985, Terminator Stout is the result of a fondness for big, burly German beers, kiln-baked grains and a few failed batches. Legend has it that, “Mike McMenamin and the Hillsdale crew perfected the recipe and poured a pint, they noted the line where a rich, coffee-with-cream colored head rests atop the black-as-night Stout, and though this terminator marks the line between light and dark, it is the union of the two that gives us the rich notes of chocolate, nuts and coffee. Some lines are meant to be crossed.” 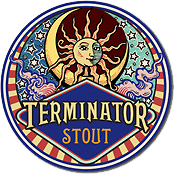 Plus, all Terminator merchandise* is 20% off in our online shop through November 19 with promo code Terminator20.
*Does not include cans or bottles. Discounts online only.

Cheers to Terminator Stout on satisfying stout fans for 35 years!