54°40′ Brewing’s first festival, Haggard Fest, drew a good crowd to the brewery in Washougal’s industrial park last Saturday and highlighted the effort that founder Bolt Minister and crew (including his dad, who’s also Bolton Minister) put into making a homey, warm space out of an industrial building with 23-foot ceilings – lots of hand-fitted wood paneling, a stone fireplace, D.J. Paul’s extensive beer can collection (they’re building more shelves) and decorations including family memorabilia such as the big dinner bell from his grandad’s cattle ranch in Nevada.

“I looked to the examples of a couple other of friendly feeling industrial spaces,” Minister said, “Lucky Lab Quimby and The Commons.” Beside a welcoming vibe, the pub has great beer including several guest taps, but you’re really missing the point if you order anything other than Minister’s beers such as his pre-Prohibition lager or Kascadia Kolsch. For my money, they’re among the best beers in a two-state area, and given that those states are Oregon and Washington, that puts them at the top of most lists. Yes, Washougal is a bit of a drive, but a visit to 54°40′ Brewing Co. ( 3801 S Truman St, Washougal, Wash.) is well worth it.

Under the leadership of former Deschutes brewmaster (and Olympia before that…) Larry Sidor, Crux Fermentation Project has become one of Oregon’s most innovative and well regarded breweries. The only real problem is that it happens to be a fairish drive from Portland, so the news that they’re bringing a range of their beers including pub-only specials to Portland is good news for us.

Pints in the Pearl

Thanks to the Pearl District Business Association Portland has a new beer festival: a one-day craft beer festival that will showcase some of the best beers Pearl District breweries — 10 Barrel Brewing, BridgePort Brewing, Deschutes Brewery and Fat Heads Brewery — have to offer. The street will be closed to vehicles and each brewery will each host a station serving three different beers, including one made exclusively for the event, along with a complementary food pairing menu. Brewery crews will be pouring at each station, so you can learn more about the beer from the very people who make and serve it.

In addition to beer and food tasting, Pints in the Pearl will feature family friendly entertainment ranging from cornhole to live music by bands including the Weather Machine and local American Idol contestant Haley Johnson.

Plan on dropping by Belmont Station for a midweek tasting of some of Epic’s great beers, including Tart ‘n Juicy Sour IPA; Los Locos Lager; Skeptic — an IPA collaboration with Colorado’s Ska Brewing — and Son of a Baptist with tequila barrel-aged coffee. They’ll be pouring a few Epic beers on tap, including Sour Brainless on Peaches…

“Inspired by the intriguing spice blends used in Indian cuisines, we carefully added our own blend of spices to help draw out the tropical notes from the El Dorado, Calypso, Centennial and Challenger hops,” said Pappe. “I believe the spice blend we ultimately chose creates an impression that is greater than the sum of its parts,” said Swihart. The beer will be widely available on tap during Portland Beer Week and in 22-oz. Bottles featuing labels with an image byPortland-based comic book artist, Michael Avon Oeming. 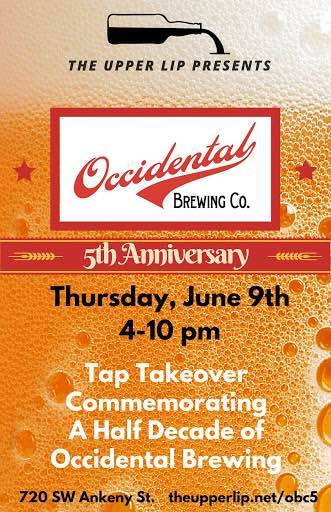 Harefest features 16 of the region’s best tribute bands, 16 hours of music, food vendors and onsite camping held in mid-July in Canby, and this is the fourth and final preview event. It  features unplugged preview sets from ACDC tribute band Shoot to Thrill; Bon Jovi tribute band Steelhorse; and Lovedrive, a tribute to the Scorpions; and the opportunity to buy no-service-fee tickets to the festival on July 15-16. And cold beer, of course.