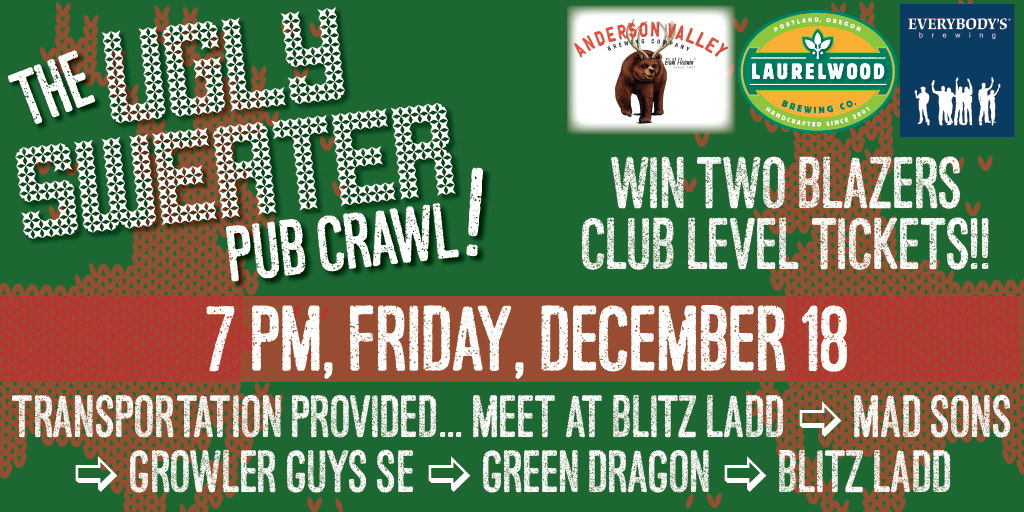 The Ugly Sweater Pub Crawl will begin at 7:00pm at Blitz Ladd and then will move on to Mad Sons, Growler Guys – SE Portland, and Green Dragon Bistro & Pub. The crawl will move to the next beer spot on the next hour. Best of all the Blitz Bus will provide the transportation to the next bar every hour, on the hour. Festivities will wrap up at 11:30pm.

Now on to the prizes for those wearing the ugliest of all ugly sweaters. At every bar, the organizers will choose a winner (who gets a little special something) and then when the crawl returns to Blitz Ladd for the last stop of the night, the winners will face off in the ultimate battle of the ugly sweaters!

Third place will leave with a Brewery Box of special goodies from Anderson Valley, Everybody’s, and Laurelwood. Second prize gets a $25 gift card to Blitz, Mad Sons, Growler Guys, and Green Dragon.

The biggest eyesore of a sweater will win the grand prize, two Club Level tickets for a Blazers game! But remember, you must be present to win.

Here’s a list of all the participating beer bars.