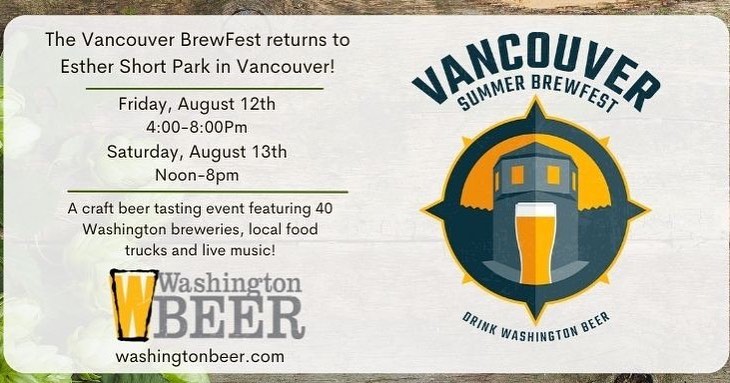 For the past two summers the Vancouver Summer BrewFest sat vacant and come this weekend the taps will be flowing with over 75 beers from 22 or so Washington based breweries.

Admission into the Vancouver Summer BrewFest is $30.00 online in advance or $35 at the door. Each entry includes eight 5oz tastes and a WA Beer tasting glass. Additional drink tickets cost $2.50 each. Designated driver admission costs $5.00 and includes water and/or soda. Advance tickets can be purchased by clicking here. Last call is 15 minutes before close, while last pour is 10 minutes before close. One must of 21 years of age or older to attend.

Here’s a preview of the tap list for this weekend’s festival.

Live music will take place during the Vancouver Summer BrewFest. On Friday at 5:00pm, Robin Gibson Band will perform. Then on Saturday, Matt Mitchell Music Company will take the stage at 1:00pm and will be followed by Jeremy James Meyer at 4:00pm with a yet to be determined band performing at 6:00pm.