With sad news we report that at the end of 2017 The Commons Brewery will close and cease operations. Founder Mike Wright has been experiencing what he says have been lagging sales and battling cash flow issues for the past two years. It was a little over two years ago when he moved the brewery into its new space at SE Belmont and SE 7th Ave. Because of these financial struggles he has decided to shut down brewing operations at the end of this year and will then lease the space to San Diego based brewery Modern Times Beer and will rename the space the Modern Times Belmont Fermentorium.

BREWPUBLIC’s relationship with Mike Wright goes back to September 2010, when Angelo De Ieso hosted Microhopic 2 at Bailey’s Taproom. This second installment featured Vertigo Brewing, Natian Brewery, Breakside Brewery, Coalition Brewing, Migration Brewing, Big Horse, Mt. Tabor Brewing and newcomer Beetje Brewery. This was the first event that Wright, founder of Beetje, first poured his beers to the public. He later went on to relocate his brewery from his garage and rename it to The Commons Brewery.

As we mentioned above, Wright will lease the space to Jacob McKean and his brewery, Modern Times Beer. Wright is not selling The Commons Brewery and will retain the rights to the name. “Modern Times is buying the larger equipment. I am keeping the old 7bbl system and smaller tanks,” Wright told us. (Update: We learned that Wright has now sold his 7bbl system)

In early July news spread in the beer community that Head Brewer Sean Burke abruptly left The Commons Brewery and his departure was quickly followed by his assistant brewer Kyle Krause. Burke is now working at Fat Head’s Brewery in Portland as an Assistant Brewer and Krause is working in the brewery at pFriem Family Brewers. At the time of Burke’s departure Wright told us this about his Burke, “Sean is a talented brewer and we are excited to see what comes from him in the future.”

We inquired about the beer that is currently barrel aging and the plans for this beer. Wright replied, “There are some beers that are ready to come out and we have a plan to package those over the next 4-5 weeks. Others are not market ready, or worthy.”

Not sure what the future holds once he closes the brewery but we do know that he will not be working for Modern Times. “My focus is on The Commons right now,” said Wright.

We are sad to see the brewery close as it was always on our list of must visit breweries in Portland.

The tiny project (Beetje) born out of my garage 2010 that morphed into The Commons Brewery in 2011 has been an exciting journey far exceeding my expectations. I’m proud of our ability to make interesting and well executed beer, and feel very lucky to have played a small part in developing a group of idealistic, passionate and sincere people into widely respected members of the brewing community. I’m not ready to write the last chapter in this book yet, but this is definitely a defining moment for The Commons.

After 2 years of lagging sales and battling cash flow, I have had to make some very uncomfortable decisions. At the end of this year we will shut down operations on SE Belmont and vacate the building. I have leased the building to Modern Times who will operate out of the space. The Commons has not been sold.

What Happened?
Unfortunately, this is a classic small business cash flow story. Sure, there is plenty of industry nuance and hindsight that can be evaluated, but this boiled down to simple debits and credits. That’s the sinister simplicity of a cash flow problem. Your debt is clearly defined, but revenue is a rollercoaster. The belief was that we’d eventually break out and get past those challenges. We did not.

What’s Next?
I am motivated to find a pathway forward for The Commons, but that’s not yet clear and I don’t want to make any claims that I cannot follow through on.

In the near term we are still making delicious beer, and pouring it from the 12 taps in our tasting room. Galaxy Myrtle, fresh hop Myrtle and Raspberry Lime Ricky are in the tank. One ­off saisons like Country Drive (Allegory Collab), Saison Quest (Level Collab) are pouring now. Flemish Kiss will be available in bottles by mid September. Staples like Urban Farmhouse and Pils are tasting amazing.

We want you all to know we appreciate the support over the years ­ the friendships we’ve made along the way are sincere and will carry forward. We’d love to see you in the tasting room to talk about beer, or the Blazers/Timbers, or the sweet hike you just got back from. I hope to offer another chapter sometime in the future. 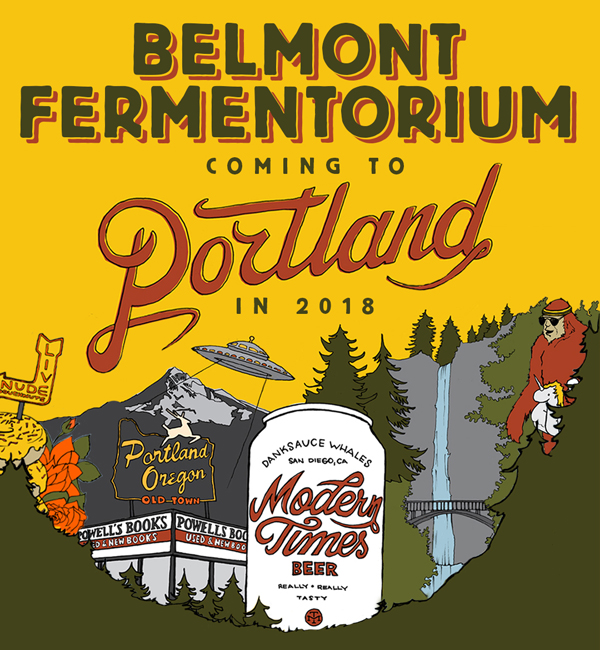 We’ve got a big announcement here, folks, so strap in.

First, a little background. I’ve loved the city of Portland for a long, long time. I’ve been visiting regularly for well over a decade, and I gave serious consideration to starting Modern Times in PDX. I ultimately decided to stay in San Diego, where my roots in the brewing scene were deepest, but I never gave up on the dream of building something in Portland. I love so much of what Portland stands for: the kickass food and drink scene—of course—but also the bike culture, the appreciation of good design, the ubiquity of Secret Aardvark, the progressiveness, and much, much more.

Once it became clear that Modern Times was going to be a success, I began giving some thought to how we would grow. And what I decided then—which I’ve been telling people openly for years—is that I’m not interested in building a giant new brewery in some dreary suburban industrial park here in San Diego. It’s not my jam for a whole host of reasons. So what I decided we would do instead is build another location like the Lomaland Fermentorium somewhere else: a place that functions as both a production brewery and a neighborhood hangout. And that “somewhere else” for me was always going to be Portland.

I knew that was going to be the plan well before I was able to act on it. It’s been something of an open secret within Modern Times from the beginning, in fact. Even before we started distributing in Portland, we scheduled collaboration brews there, both to deepen our relationships with brewers we admire and to give ourselves a business excuse to visit a city we love.

Since we’ve started distributing in the PNW, we’ve been blown away by the acceptance and warm welcome we’ve received from beer drinkers and brewers alike. I was given no shortage of warnings about how difficult it would be for an out of town brewery to succeed in Portland, but I always felt like we had a chance to be the exception to the rule. And thus far, that has indeed been the case, which is incredibly heartening and has reaffirmed my feeling that the second Modern Times production location should be there.

So, with an eye towards finding a space that could be leased and built-out in time for a 2019 opening, we started working with a real estate broker. He began sending us raw spaces, which would have required over a year to build-out, which is what we expected going into this.

But after we’d begun the search, I got an email from Mike Wright, who owns The Commons and the 10,000 sq ft building on Belmont that the brewery occupies. We’ve collaborated twice with The Commons and developed a close bond with them. Hell, even before the collabs, when Modern Times was just a tiny start-up, I got an incredibly gracious email from Mike saying that he’d had a chance to try a can of Lomaland and that he was extremely impressed. As an insanely stressed-out new business owner who looked up to The Commons in a big way, that email meant a great deal to me.

When Mike contacted me earlier this year, he let me know that the current space wasn’t working well for their operation and asked if I was interested in leasing the space. It pretty quickly became clear to me that this was something we should do. It filled a real need for Modern Times—we’re capacity constrained, in part due to our success in the Pacific Northwest—while helping out a friend of the brewery who had shown us support and solidarity along the way. Just recently, we officially signed a lease on the space.

I need to pause here to make very clear what is not happening: we are not acquiring The Commons. The Commons is vacating their space, and Modern Times is leasing the space from Mike, the building’s owner. I realize this key point will probably get butchered in the telling and retelling of this news, but at least I did my best to make it clear.

So, what does this mean for Modern Times? It means that on January 1st, 2018, we will be the new tenants of 630 SE Belmont St, which we’ve dubbed The Belmont Fermentorium. We plan to close for about a month, while we bring in new equipment and add some of our distinctive art installations to the tasting room. The nice thing about this project is that, unlike our other seemingly interminable construction projects, it already exists and so the timeline is much firmer. After we re-open—with a suitable celebration—The Belmont Fermentorium will begin producing all of the Modern Times draft beer for distribution in the Pacific Northwest. First year capacity should be around 7,000bbls.

Obviously, this will mean even fresher, better, locally-brewed draft beer for all of our fans in Oregon, Washington, and Idaho. The tasting room will serve the greatest hits brewed on-site, in San Diego, and at our forthcoming R&D brewery in Los Angeles (which will open before the end of the year.) The Belmont Fermentorium will also function as a pick-up location for The League of Partygoers & Elegant People.

Additionally, we’ve signed a lease on the neighboring building (600 SE Belmont), which is a 10,000 sq ft raw shell (the same size as 630 SE Belmont.) This space will take at least a year to renovate, but once it’s complete, it will house a packaging hall and tank farm, which will allow us to brew and package all canned beer for PNW distribution. Final capacity for combined spaces should be around 20,000bbls. Once 600 SE Belmont opens, we also plan to add a coffee roaster and café, along with a full food set-up. It should be pretty radical.

Alrighty, that’s it for now. We’re incredibly excited to be coming to Portland, and we’re so looking forward to becoming a pillar of the local brewing community in a city we love so dearly.