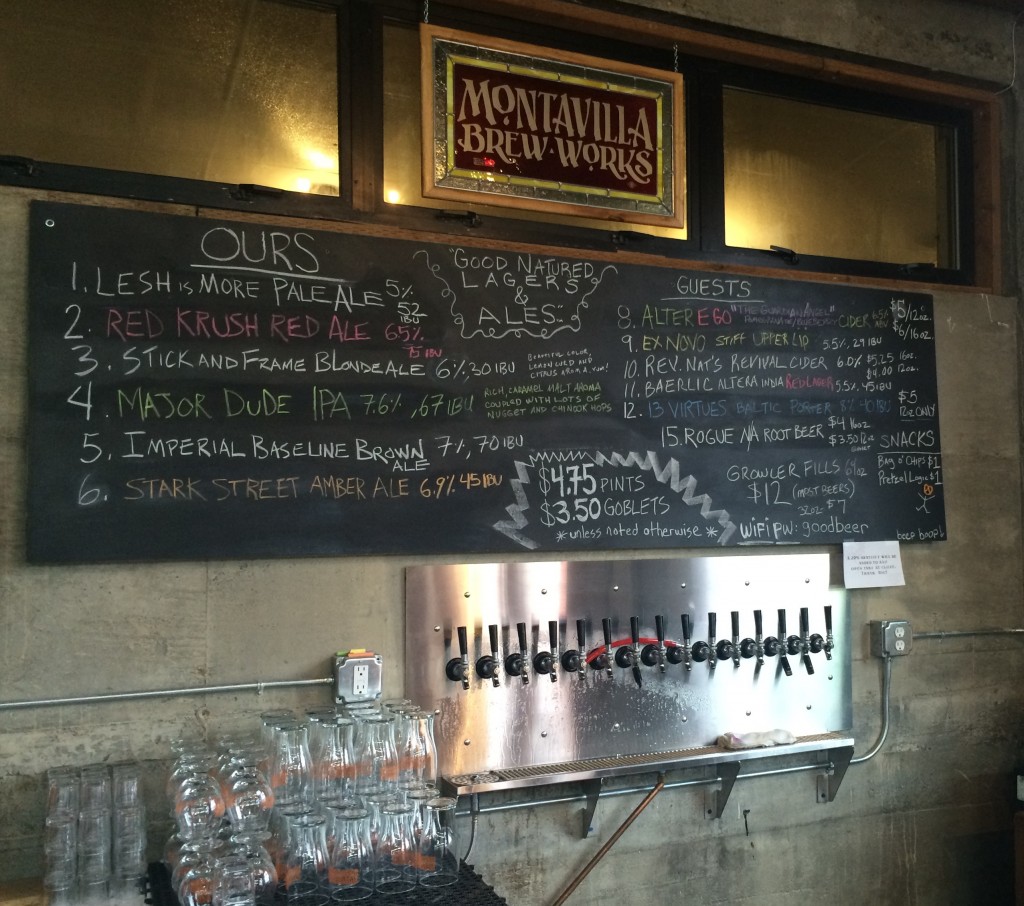 Having spent most of his life in the state of Michigan, Michael Kora and his wife Melissa relocated to Portland and its Montavilla neighborhood back in 2006. Now a decade later Kora has finally realized a lifelong dream of opening up his very own craft brewery in the neighborhood he calls home. Montavilla Brew Works officially opened its doors on July 17, 2015.

However the planning for this brewery began many years ago prior to arriving in Portland. While he was living in Michigan Kora dabbled in homebrewing. Then when the couple decided to complete a cross-country move to Oregon Kora landed a position in the wine industry at Ponzi Vineyards. This was short lived when he soon began a seven-year run at BridgePort Brewing working in the brewery’s warehouse. While at BridgePort Kora immersed himself in learning as much knowledge as possible from the brewers there so that one day he could open his very own brewery. It was in July 2012 when he decided it was time to begin planning this new endeavor.

This brewery planning continued for the next 1-1/2 years before he took over an abandoned auto service building at the corner of SE Stark and SE 78th in January 2014. Once the build out on the building began Kora ran into additional stumbling blocks that prolonged this construction for 18 months, a bit longer than he anticipated. To offset some of these expenses Kora began contract brewing a few of his beers at 13 Virtues Brewing during this construction phase.

Now with all of this behind Kora, Montavilla Brew Works is now serving its own beers brewed on its 10-barrel brewhouse built from Practical Fusion. Inside this brewery sits its taproom that takes up about three quarters of the space. Here Montavilla Brew Works serves up to 15 rotating taps with about 6 or 7 brewed on site. The other taps are dedicated to guest beers and one to Rogue Root Beer, the non-alcoholic kind.

During our visit on a recent Friday afternoon the partially filled taproom was frequented by locals and out of town travelers. On tap were six Montavilla brewed beers that had no flaws, which was a very pleasant find since that is not the case with some other recently opened breweries. The beer offerings consisted of a Stick and Frame Blonde Ale, Stark Street Amber Ale, Lesh Is More Pale Ale, Major Dude IPA, Red Krush Red Ale and Imperial Baseline Brown Ale. Yes, mainly traditional styles but Kora’s interpretation of these styles is promising.

Kora mentioned that the Stick and Frame Blonde Ale currently is the brewery’s top seller. It is a tasty one that offers up more of a hop profile than what is normally associated with a Blonde Ale. Another enjoyable beer is Lesh Is More Pale Ale. How can you go wrong naming a beer after Phil?

In the near future be on the lookout for Kora’s Fresh Hop beer that uses Chinook hops along with a Barleywine and IPA blend. Regarding this blend Kora recently brewed up a batch of Barleywine that is he letting age a bit but decided to blend a one off keg with the brewery’s Major Dude IPA. We were offered a sneak peak and this one is worth keeping an eye out for its release. The added IPA mellows out the boldness of a fresh IPA. Kora plans to tap this blended Barleywine in the coming weeks and will alert the brewery’s Facebook followers when this beer hits the taps.

The taproom is just that, a space that only serves beer and food is not a focus or priority so patrons are free to bring in food from outside. Fortunately the location is very convenient to many or Montavilla’s restaurants and is across the street from Flying Pie. There is seating for 5 at the bar and additional seating at a couple tall tables and a long former church pew all with great vantage points of full views of the brewery. A major focus of the taproom is the brewery as the only thing that separates the brewery and the taproom is a very low wall. Then when one ventures outside they’ll be greeted to Montavilla Brew Works large beer garden. With 11 picnic tables this is a great spot to meet up with friends of fly solo on nice weather days and take advantage of the space’s free Wi-Fi.

Montavilla Brew Works is also a great spot to go pre or post movie viewing at the nearby Academy Theater. Also since the taproom does not serve food it is only open for those that are 21 years of age or older.

On social media Montavilla Brew Works can be followed on Facebook.