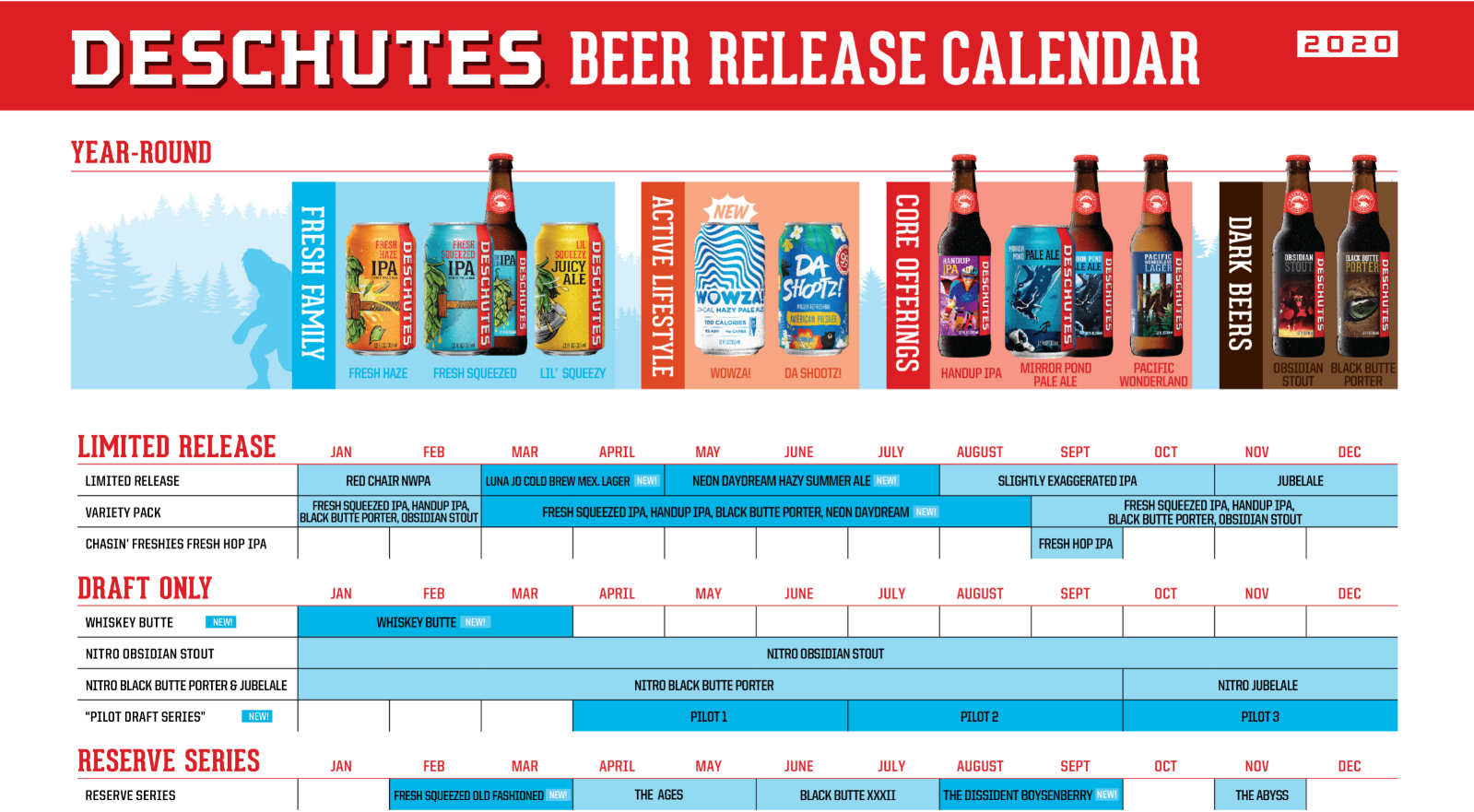 WOWZA! is a new Hazy Pale Ale that joins the low calorie, low carb and low ABV category that many brewers are entering. This beer is beginning to hit the marketplace this week and is part of what Deschutes’ describes as the “Better For You Category”.

Biggie Fresh is an Imperial IPA and Teensy is on the opposite end of the spectrum as it’s a low 2% ABV beer. These two beers will be available later in the year beginning in September 2020.

New Year-Round Offerings
WOWZA! 4% ABV, New Year Release in 12-ounce cans and draft
A brand-new Hazy Pale Ale that’s 4% ABV, only 100 calories and 4g of carbs and uses Chicory Root to balance the body of the beer without affecting the calorie count.

Teensy ~2% ABV | 20 IBUs, September release in 12-ounce cans
Teensy is a petite hazy adding a low alcohol offering to the brewery’s mainline brands. This low ABV hazy has a strong, hop and fruit forward flavor with a light body for ultimate drinkability.

Neon Daydream Hazy Ale 4.8% ABV | 35 IBUs, May-July
A hazy summer ale that radiates like the glow of light behind closed eyes on a long summer day. Brewer’s experimentation with new yeast strains, new hop combinations and brewing methods led to this amalgamation of wheat, white, and hazy pale styles with aromas of orange, lemon, and fruity esters and a zesty, citrus hop flavor.

Slightly Exaggerated IPA 6% ABV | 50 IBUs, August-October
A collaboration with Travel Oregon that captures the magic of Oregon like a whimsical fairy tale in a bottle with a slightly exaggerated tropical hop profile from the extraordinary Sabro hops.

Chasin’ Freshies Fresh Hop IPA 6.0% ABV | 55 IBUs, September (based on timing of hop harvest) in 12-ounce cans
A bright, clean and crisp IPA that showcases a new hop every year that goes from vine to kettle in a day!

Expressive Sour Series 4.3% ABV|18 IBUs, April – December
The Deschutes Sour Series is a new, innovative and creative series of stainless, lacto soured beers that vary in the use of fruit, hops, spices and specialty ingredients that all maintain a harmonious and clean mild to medium acidity. This series satisfies an emerging interest in kettle sours, and a movement toward fruit-flavored beers delivering a culinary-inspired and truly unique offering. Almond Oat is the first in the series launching in April that include notes of a Biscotti-like almond and cookie malt character in the aroma that finishes intriguingly tart with a balanced sweetness. Next up will be a Guava Catharina Sour as well as new additions that are currently in development.