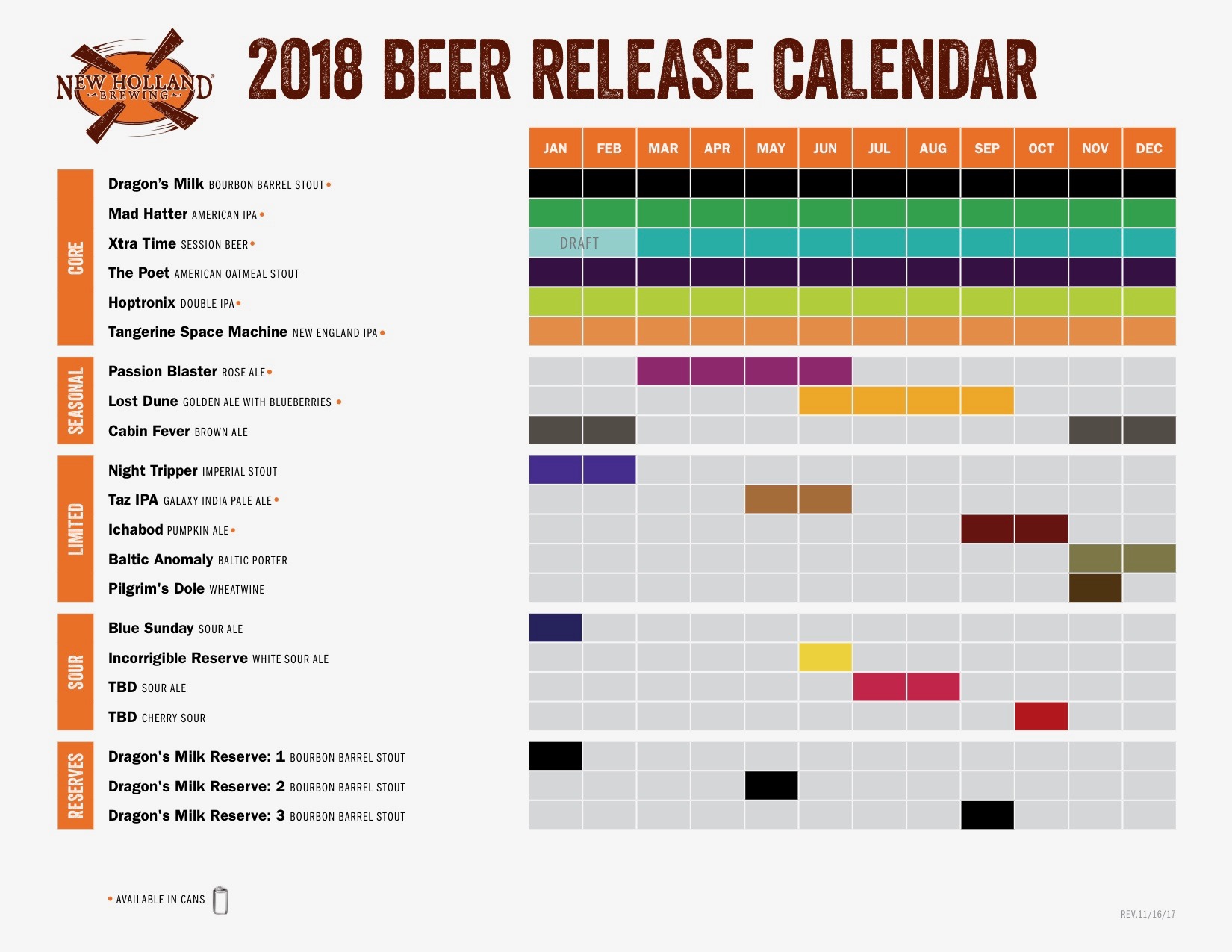 “New Holland is a brand that listens to its fans and is committed to pushing creativity within craft styles while also growing long time favorites,” says New Holland President and Founder, Brett VanderKamp. “Each brew is thoughtfully crafted and inspired by the stories around us. I think our 2018 lineup is exciting for both new and existing fans alike. We continue to build around Dragon’s Milk as our top brand while letting our brewers unleash their creativity.”

The first new beer, releasing in January 2018, is Tangerine Space Machine New England Style IPA. This beer is a fruit forward, hazy NE IPA offered year-round. It will be available in limited quantities mainly in MI and Midwest states and is available in draft and six pack can packages. Launch events for TSM will occur at both of New Holland Pubs, Pub on 8th (Holland, MI) and Knickerbocker (Grand Rapids, MI), in December 2017 and throughout the first three months of 2018.

“The initial response to Tangerine Space Machine in our brewpubs has been phenomenal,” says Joel Petersen, Vice President of Beer Marketing. “It has very quickly become our #1 crowler take-home brand from our pubs and the top beer purchased by our employees. We absolutely love the flavor profile and can’t wait to see the playful space-themed cans on shelves. It’s juicy, hazy and out of this world.”

Many of the brands are moving into can packages, including Hoptronix Double IPA, TSM, Xtra Time, Lost Dune, and Taz IPA. Mad Hatter will be offered in both can and bottle options.

As always, New Holland expects to maintain some flexibility in its lineup throughout the year, and consumers can expect a few surprises in 2018 that have yet to be announced.

About New Holland Brewing Co. New Holland Brewing Company’s deep roots in the craft industry go back to 1997. Our role as an integral member of the artisan approach is something we take seriously, yet engage lightheartedly.  We believe the art of craft lives in fostering rich experiences for our customers, through creating authentic beer, spirits and food while providing great service. Recognized for our creativity and artistry, our mission to improve the lives of craft consumers everywhere is seen in our diverse, balanced collection of beer and spirits.