A 46-year holiday tradition continues with the release of the 2020 vintage of Anchor Christmas Ale. Each fall, Anchor Brewing releases a new version of its iconic Christmas Ale that also is known as Merry Christmas & Happy New Year (Our Special Ale). Just as the beer’s recipe is different each year, so is the beer’s label, that creates a unique tradition for beer fans.

This year’s Anchor Christmas Ale marks the first release by the recently appointed Anchor Brewmaster, Tom Riley, whom has been an employee at Anchor for the past 36 years. On his first fully creative development and release of a beer, Riley has excelled on the 2020 version of this annual winter warmer.

It was 45 years ago when former owner and Brewmaster Fritz Maytag created the first Anchor Christmas Ale that was a Pale Ale. This year’s version is new and different, just like the 44 versions that have been brewed since the beer’s inception. However, one thing does remain constant as the inspiration behind each brew remains the same: joy, hope and celebration as we enter a new season.

For 2020, Riley brewed a Spiced Brown Ale that that sits at the highest 7% ABV, the highest that this beer has ever been brewed at. That said, this is the only details that have been revealed about the beer as in 46 years Anchor Brewing has never shared its Christmas Ale’s recipe.

From serving the 2020 Anchor Christmas Ale, the first thing we noticed is the darkness of this year’s vintage as it also happens to be the darkest that this beer has ever been. It pours a dark brown, almost black color with a nice dark tan, frothy head. Aromas of dark roasted malts and coffee fill the senses as flavors of malty chocolate and spices abound. Nothing too overpowering but a nice change from the many other winter beers that have strayed away from the winter warmer style that once draped the beerscape many years ago. Looking forward to opening another bottle of Anchor Christmas Ale in the near future!

It’s just not the beer recipe that changes each year for Anchor Christmas Ale as the beer label’s artwork of a symbolic hand-drawn tree is also new for each release. This year’s label features The Three Graces; three iconic towering sequoias from the Mariposa Grove in California’s Yosemite National Park. This is only the second time in its 46-year history that multiple trees are shown together on the label, a fitting statement to symbolize togetherness and hope in a year when so much time has been spent apart.  The Three Graces represent radiance, joy, and flowering – characteristics that we can all hold near during this unprecedented time. 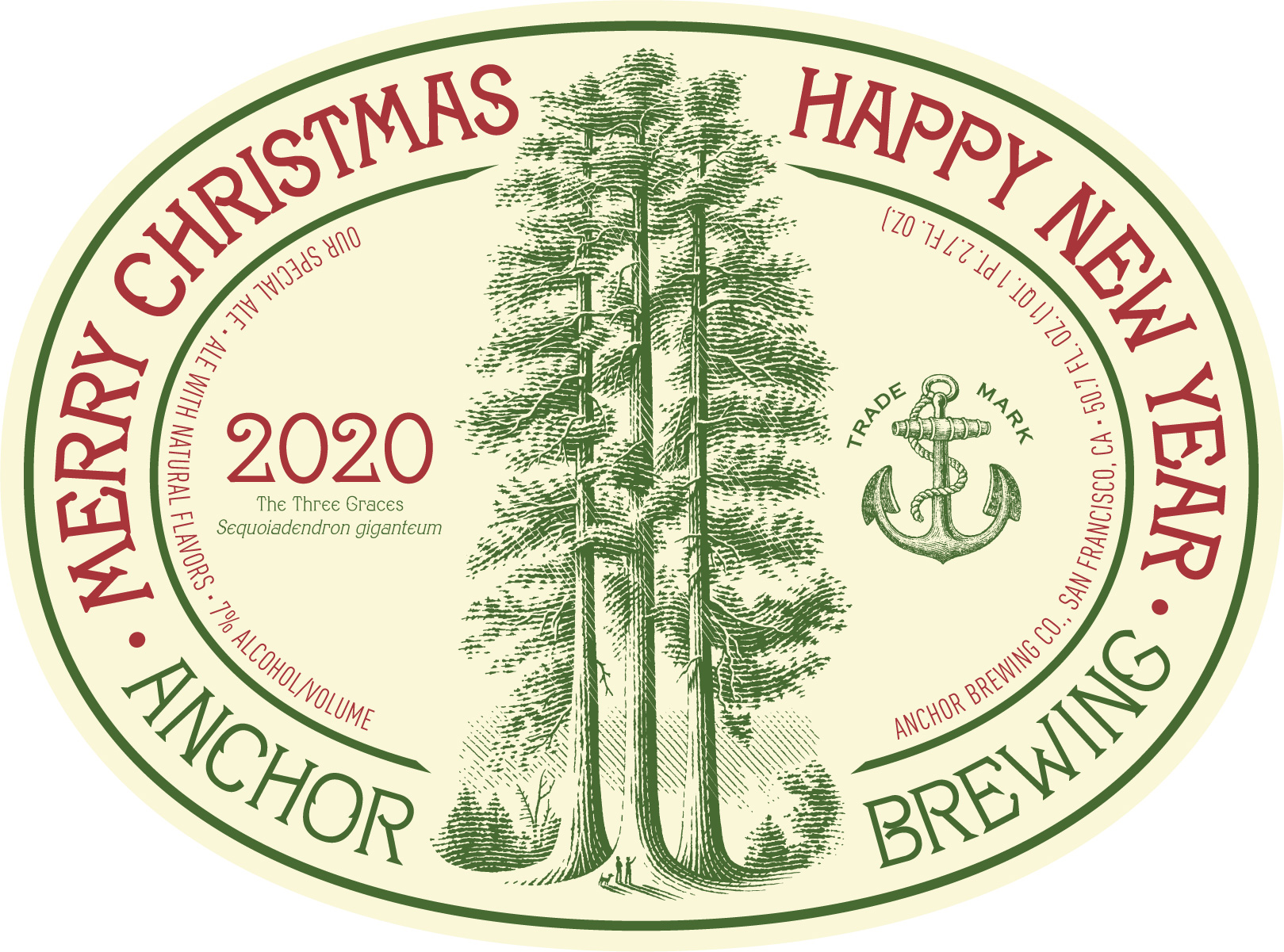 “In such a challenging year, we wanted our Christmas Ale to be a moment of joy during the holiday season,” says Anchor Brewmaster Tom Riley, in a statement.  “With a one-of-a-kind label, the highest ABV in history, and a balanced, holiday-inspired flavor profile, we believe that this year’s Christmas Ale stands in a category of its own. Our Christmas Ale fans will be thrilled with year’s offering and first-timers will be in for a special treat.”

This year, Anchor Christmas Ale is a proud sponsor of Meals on Wheels’ “Don’t Stop Now” campaign, raising awareness and encouraging individuals to take action in support of vulnerable seniors both nationally and in their local community. Meals on Wheels supports over 5,000 community-based senior nutrition programs across the country, helping fight hunger among senior citizens by delivering meals. To learn more about the “Don’t Stop Now” campaign and to donate to Meals on Wheels, visit www.mealsonwheelsamerica.org/dontstopnow.

“One of the best parts about this brew is that, even though it is named Christmas Ale, it’s truly a perfect beer from late October and into the New Year.  It can easily be paired with a meal or replace an after-dinner dessert wine,” Riley shared in a statement. Ideal dessert pairings are crème brulee, molten lava cake, pumpkin pie and more. Suggested savory pairings are turkey and a rack of lamb.

Anchor Brewing’s 2020 Christmas Ale is now available through January 2021 or while supplies lasts. This holiday treat is offered in 6-packs, 12oz bottles and a gold-foiled 50.7 oz. magnum bottles, as well as on draught in select stores, bars and restaurants. You can find 2020 Anchor Christmas Ale or any other Anchor Brewing beer near you by using the Anchor Beer Finder.