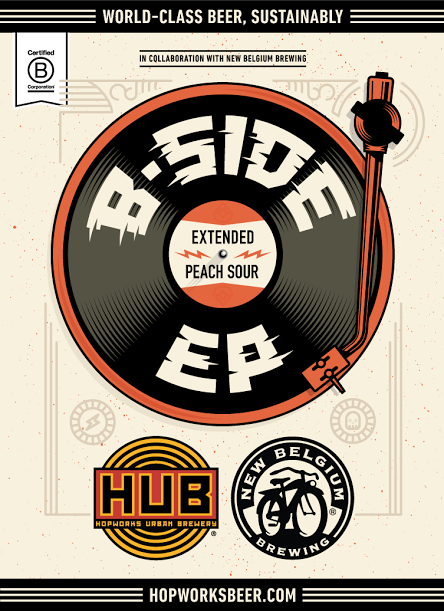 Portland, Oregon, July 24, 2015 – Hopworks Urban Brewery and New Belgium Brewing are getting the band back together to create their second collaboration beer, Organic B-Side EP. This Peach Sour Ale is being brewed at Hopworks with members from both companies’ brewing teams and will be released at a Rooftop Party at Revolution Hall in Portland on August 19.

The name B-Side EP celebrates the B Corp Certified status earned by both sustainably-minded breweries as well as their love of bicycles and bike culture.

B-Side EP is a kettle soured ale made by brewing the wort on Friday and then letting it sit over the weekend in the kettle. On Monday the wort will be transferred to the fermenter where it will join with 50 pounds of organic peaches and dry hopped with juicy and bright organic Amarillo, El Dorado and Chinook hops.

EP refers to “Extended Peach” and also the extension of the project into Portland. The first collaboration brew, B-Side Organic Peach IPA, was brewed in Fort Collins and made its debut at the Oregon Brewers Festival earlier this week. It is available now at both Hopworks pub locations for a limited time.

“As friends and B Corp allies, our B-Side EP celebrates our passion for beer as a force for good,” said Hopworks Brewmaster and Founder, Christian Ettinger. “New Belgium has long been an inspiration to myself and the HUB team because of their great beer and their commitment to sustainable brewing operations. It is a true honor to work together. In this playful collaboration we have taken our greatest combined skills and squeezed them into an organic beer that is packed with fruit and citrus aromas and flavors, and a tart finish.”

To help celebrate the brewing of the beer, brewers from both breweries created a playlist of their favorite B-Sides and EPs. Everyone is invited to join in and listen by tuning into our Spotify playlist.

To learn more about New Belgium Brewing, check out NewBelgium.com and for more info on Hopworks Urban Brewing, visit HopWorksBeer.com. Additional details on the release party will be announced as the dates get closer.

About Hopworks Urban Brewery
Hopworks Urban Brewery (HUB), a certified B Corporation, strives to revolutionize and inspire the brewing industry with practices that drive quality, protect the environment and improve the community we live in. Utilizing organic malts and a combination of locally-sourced organic and Salmon Safe hops, the company’s 20-barrel brewery produces 16,000 barrels of beer a year for HUB’s two brewpubs and for distribution throughout the Northwest. In 2015 Hopworks expanded its range of sustainably-made offerings with HUB Hard Cider and will open its third pub at the Pine St. Market in Downtown Portland. HUB is 100% renewably powered and “cradle to gate” carbon neutral.