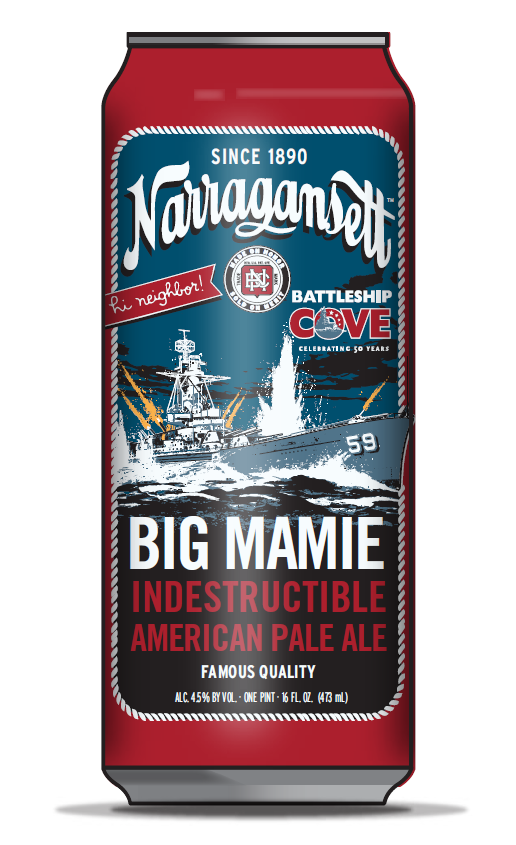 Narragansett Beer has just released a new winter ale that salutes the famed World War II Battleship USS Massachusetts, Big Mamie. As we celebrate the lives that defended this great nation today on Veterans Day, it’s perfect timing to welcome Big Mamie Indestructible American Pale Ale. This session ale at 4.5% ABV commemorates the 50th anniversary of maritime museum Battleship Cove and Narragansett’s own efforts to save the impenetrable warship many years ago.

Recognized in American history for firing both the first and last U.S. Navy sixteen inch shells during World War II, the USS Massachusetts, otherwise known as “Big Mamie,” served her country proudly for many years. However, despite her storied history, Big Mamie was on her way to the scrap yard to be stripped of her parts by 1964. With her heroic past and New England pride in mind, Narragansett Beer spearheaded a fundraising movement with the local Massachusetts community to save the beloved ship from destruction. Thanks in part to ‘Gansett’s charitable efforts, in 1965 Big Mamie made a victorious return through Narragansett Bay to the Fall River, Massachusetts waterfront where a half million adoring fans lined the shores to welcome her home.  The vessel is still docked there today as the crown jewel of America’s Fleet Museum at Battleship Cove.

“My mom first took me to visit Battleship Cove in November of 1972,” said Mark Hellendrung, president of Narragansett Beer. “I was only 4 years old then, but the pictures from the deck of the ship are in my family photo album and are very meaningful to me. Now, I drive by Battleship Cove and look down onto the fleet everyday on my trip to and from the ‘Gansett offices. Knowing what Big Mamie truly represents and learning more about Narragansett’s role in rallying New England to help preserve such an important part of American history – it’s something that hits me, even if only for a second during my drive every day. I’ve come to learn that my wife’s grandfather served in the US Pacific Fleet with Big Mamie in WWII, and this release is our way of honoring him and every brave American who has fought for our country – it’s our way of remembering that our safety and freedom has been built and protected by generations of selfless servicemen and women.” 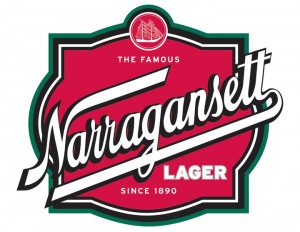 “Narragansett is a historical and iconic beer and 50 years ago they stepped up and said ‘Hi Neighbor’ to support the saving of another historical icon – Big Mamie – the USS Massachusetts. It was a great partnership then and 50 years later it’s a great partnership again,” said Brad King, executive director of Battleship Cove. “I cannot think of a better way to celebrate such teamwork than with the coming together of high quality ingredients to make a beer worthy of Big Mamie and her crew.”

Brewed under the supervision of Narragansett Beer Head Brewmaster Sean Larkin, this easy-drinking winter sessionable is made with U.S. Pale, Cara Belge, Vienna and Special B malts, and is carefully balanced with U.S. Chinook hops. To achieve an indestructible American finish, the beer is then dry hopped with U.S. Liberty for a crisp and bright taste.

To honor the launch of this battleship brew, Narragansett Beer will host a release party at The Cove Restaurant on the waterfront in Fall River, Massachusetts from 6pm – 8pm on Veterans Day, November 11, 2015. Just down the road from Big Mamie herself, guests are invited to take the first sip of this iconic collaboration that pays homage to the historic battleship.

For additional information about Narragansett Big Mamie Indestructible American Pale Ale or to find a retailer near you, visit www.narragansettbeer.com.  To learn more about Battleship Cove or to help preserve Big Mamie for years to come, visit www.battleshipcove.org/donate.

ABOUT NARRAGANSETT BEER:
Narragansett Beer…Brewed since 1890. ‘Gansett is a straightforward, quality beer that has been a New England tradition for generations, producing a classic family of award-winning American lagers & ales. Today, ‘Gansett is produced at top-rated breweries in Rochester, N.Y., and Westport, Mass. and is one of America’s top 50 regional brewers and the fastest-growing in the Northeast. Narragansett is available for purchase in local restaurants, bars, and liquor stores throughout New England, New York, New Jersey, Pennsylvania, Delaware, the District of Columbia, Maryland, North Carolina, Florida, and Nashville and Chattanooga, Tenn.

ABOUT BATTLESHIP COVE:
Battleship Cove preserves the world’s largest collection of historic naval ships and serves as the official memorial for all Massachusetts service personnel who gave their lives in World War II, and the Korean, Vietnam and Persian Gulf Wars and September 11, 2001. Preserving five National Historic Landmark naval vessels, Battleship Cove also delivers educational programs that expose a national audience of 60,000 youths to a mission that promotes duty, honor and country. Call 508-678-1100, or visit www.battleshipcove.org for more information.