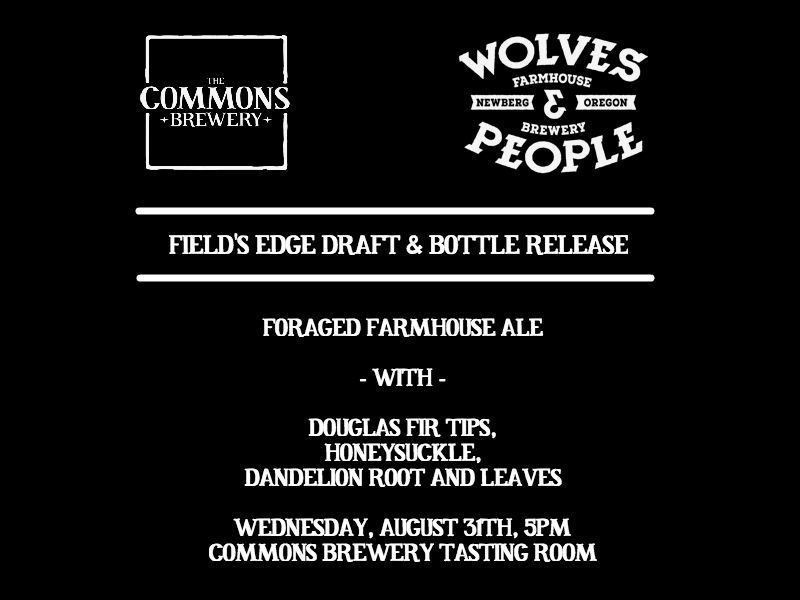 Brewed at the Commons, Field’s Edge has been hiding in their cellars since February 2016. This foraged farmhouse ale was fermented with yeast from both breweries and finished with Douglas Fir tips, honeysuckle, dandelion root and leaves. The result is a rustic farmhouse ale with a complex floral character, balanced by a dry, lightly tart finish.

Christian and Jake from Wolves and People will be at The Commons Tasting Room from 5-7pm to celebrate the release and share some of their new delicious beers.

The Commons Brewery opened in December 2011, crafting small batch, approachable and balanced beers inspired by European brewing tradition. The Tasting Room is located in the heart of Portland’s Central Eastside Industrial District at 630 SE Belmont Street and is open everyday from Noon to 10pm.

Based in Newberg, Oregon, Wolves & People is dedicated to brewing modern American interpretations of styles that have been slowly perfected over many generations across the great brewing nations of Belgium, primarily, but also France, Germany, England, Scandinavia, Netherlands, and the Czech Republic.