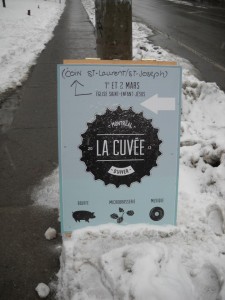 A new beer event came to the world within the basement of the Saint-Enfant-Jésus Church in Montréal. La Cuvée D’Hiver was part of the 10th edition of the Montréal En Lumière Festival.

I heard of this new beer event through social media sites that proposed an event with beer, food and music with a list of beers selected for a large pool of beer consumers. Some not yet tasted products sparked my interest, and free hours in my schedule helped me to decide to drive to Montréal. My first feeling wasn’t good at all. This church basement, with grey terrazzo flooring and walls painted with colors that would give a headache to a coulour-blind person reminds me the basement of our local church where I did attempt to attend 4H and scouts meetings in my youth. I however have to admit that the 50’s music and growing crowd did convince me that this cheesy environment would be fine for the first edition of La Cuvée D’Hiver.

Close to 73 beers from 27 breweries were presented. Five breweries got their own booth while the rest of the selection was separated in two standard booths and a cream bar that offers six nitrogen taps hidden in an old barrel–an original idea to complete the ambiance. Here is a little review to some of the greatest I had while listening to Chérie Cherry music. 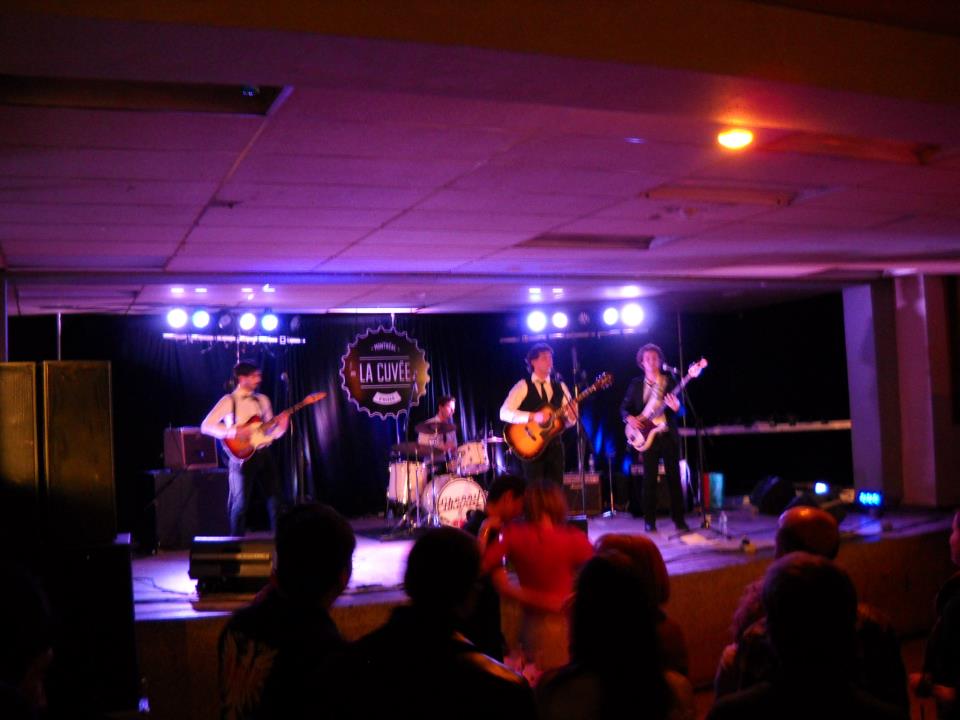 Microbrasserie du Lac Saint-Jean. Rang IV
A stout. Not extreme, but just simply made at 4% of alcohol. A coffee mouthfeel that develops as the product reaches ambient temperature. Just wishing that this one will be available on the shelves, like their Houblon Libre Black IPA I tasted earlier this year. So well brewed that you can’t resist. 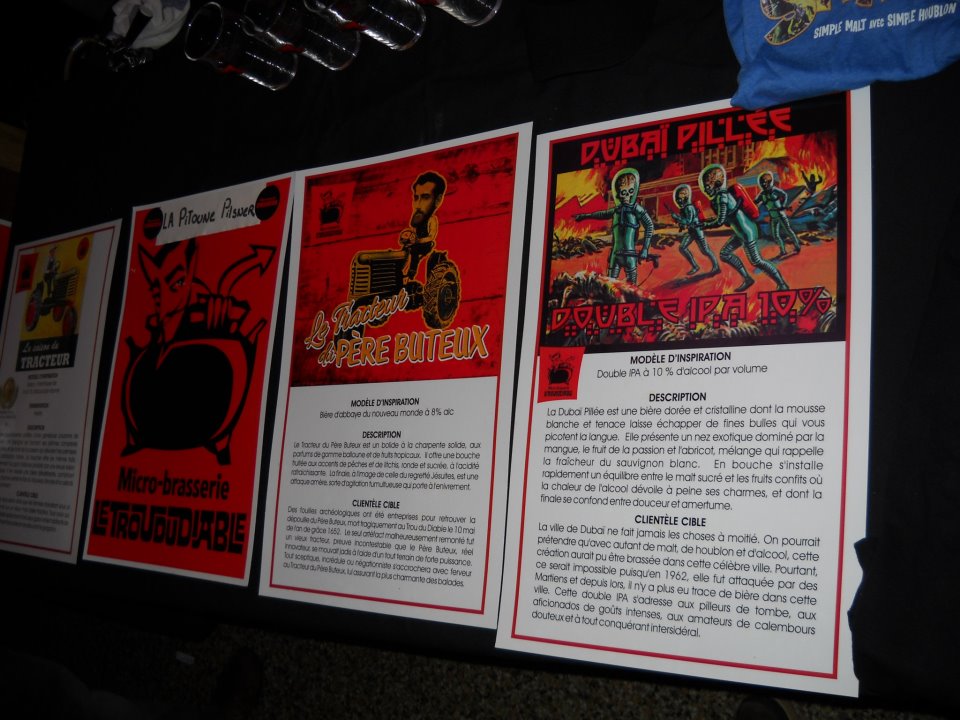 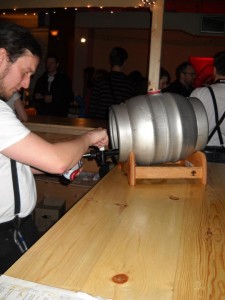 Microbrasserie Le Trou du Diable. Tracteur du Père Buteux
There is no secret that I have a real affection for this brewery. Five beers were presented in their booth. Tracteur du Père Buteux got my attention. The name indicated a blend of La Saison du Tracteur and Buteuse. Usually, this practice comes from drunk customers who tries strange mixes during a drinking evening. There is a brewery in Québec city that brew couples recipes with lime and others fruits variations without finding the good combination. That’s probably why I was suspicious about it at the first approach. The other question was also, why blending two great beers? Well it is likes
cooking, only use great ingredients if you want a good meal. What a nice surprise and brewing art demonstration. The brewers created a blend which highlighted the best of the refreshing saison and the robust body of the Belgian. Until now, this blend is available at the brewpub only, but I’m sure it will be seasonally released since the brewery has now a brewing capacity of 5000 hl and bought a bottling unit. The first bottles should be on the shelves for April. Ask for Le Trou du Diable products at your local beer store.

Dieu du Ciel! L’Exorciste
Special release for the event. This witbier is the result of a 18 months oak barrel blending with those microorganisms that brings such a new horizons to beer industry. How to describe it? Sour, wild, oak, wood. Definitely not for a mass consumption, but for those who look for wild ones. 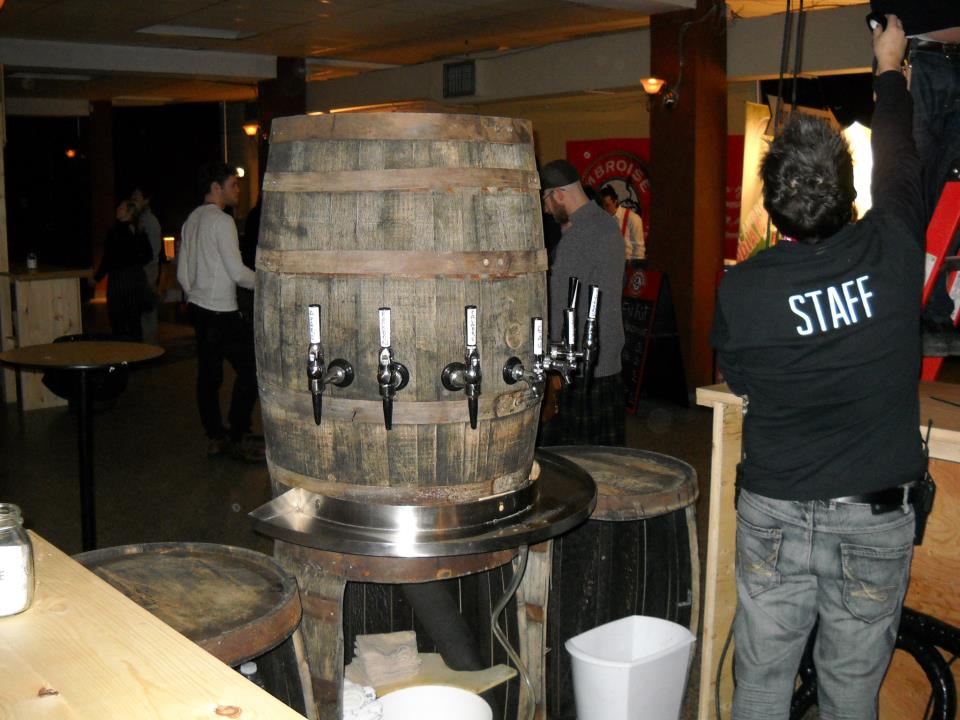 Les Trois Mousquetaires. Black IPA
The unique cask of the event pours a test batch of black IPA brewed with Mandarina Bavaria a new hop varietal for me. It provides a quite resinous feeling and a light citrus taste. Nice. This beer was an experimental batch for the brewery. It would have an interest for beer events and at a brewpub. How about bottling it? The future will tell us.

Microbrasserie Pit Caribou. IPA Américaine
Directly from L’Anse-à-Beaufils, QC, this brewery elaborates new recipes that will higher quality standards in our area. This american ipa is one of the best example of this style we can find here. Well, if you’re experienced a little, just look at the bottle and you should recognize a great US brewery. A nice floral bitterness with a good body. Excellent. I also had great comments about their No 13. Tennessee Imperial Porter. The only problem with this brewery is that they don’t deliver in Saint-Hyacinthe so I have to drive 25 minutes to reach a decent beerstore to grab it. 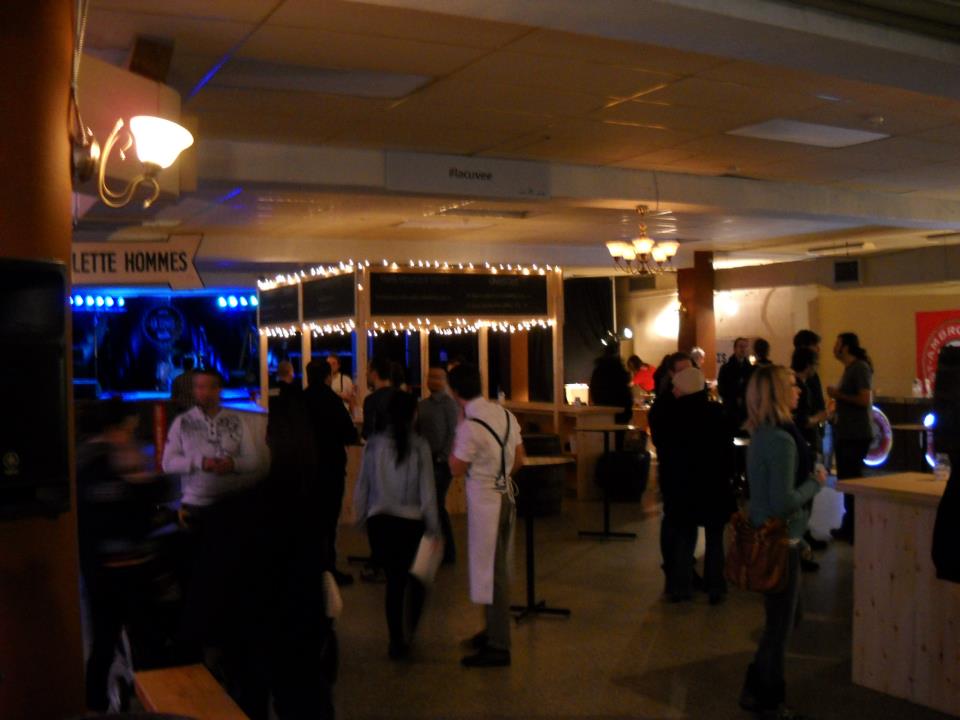 Mixology with La Succursale: The only example I have of a beer that can be drunk warm is La Quelque chose from Unibroue. Heat it until the first vapors (do not boil) and taste it in a wide mug. La Succursale presented a beer winter cocktail spiced up with coriander, clovers and oranges. An original idea that should be widespread to all breweries from December to March. Who’s gonna be the brewer to propose a new beer style named “too cold for a beer?”