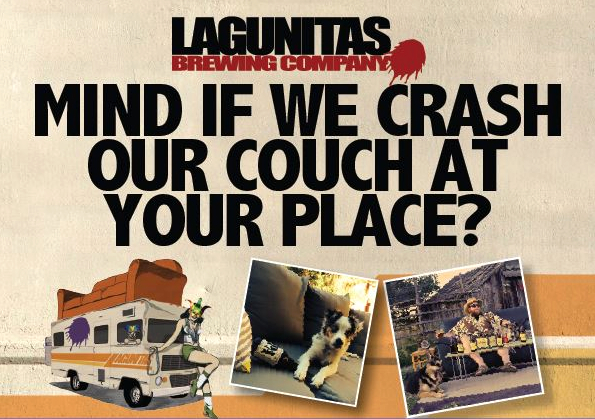 Lagunitas Brewing is never at a loss for creative marketing ideas. In their latest campaign they are seeking to crash their couch at your place.

This fall Lagunitas is headed out on the road again “Couchtrippin” around the country and they want to be invited over to your place? They’ll bring the couch? The best way to get Lagunitas in your house is to take a picture and show us how you party with Lagunitas on your couch.

You can get all details here at lagunitas.com/couchtrippin.

Here’s a video the goes a bit more in depth on Lagunitas Couch Trippin’.

So what you need to do is to snap a photo of your couch along with some Lagunitas. Then tag it #Couchtrippin on Twitter or Instagram. Seems pretty simple.